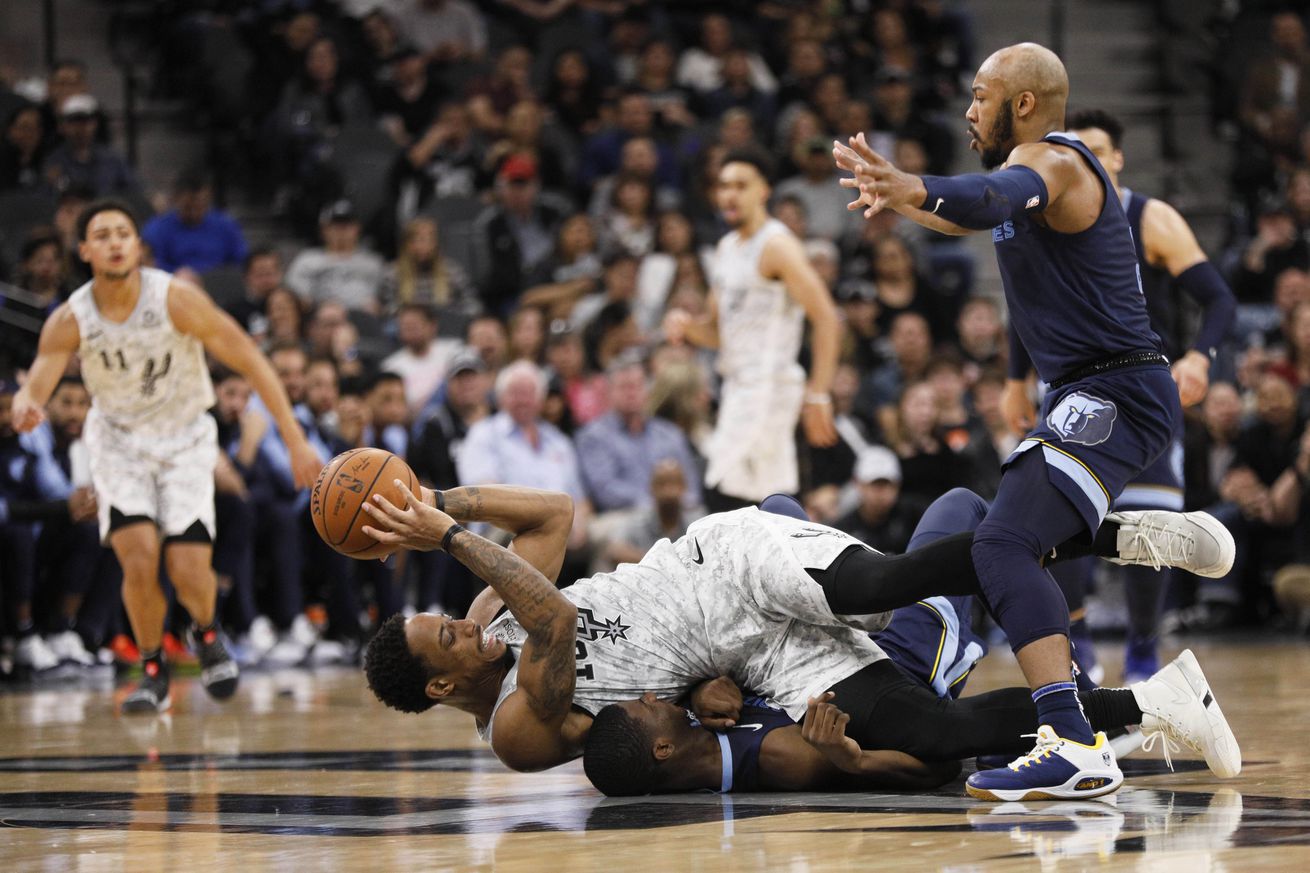 They might not be pretty, but they still count.

The Grizzlies have long excelled at mucking up the beautiful game of basketball, turning it into something akin to tug of war. The Spurs, too, have that in their past, but it’s been a decade since the silver and black played the kind of intensely physical defense the Grizzlies bring every night. Without the elegant extremes of the Spurs’ motion offense, Memphis’ games are often disjointed affairs, and Saturday night’s meeting was no exception.

As a result there were more than a few possessions that devolved into a series of inexplicable events.

Hard to even know how to describe a playblike this. Just one crazy reversal of fortune after another. pic.twitter.com/XEC9cF2tK8

Well, boss, challenge accepted. That clip contains all the shenanigans, but cuts out the perfectly inauspicious beginnings that paved the way for this little bit of schadenfreude.

DeMar DeRozan slows up on the left side of the court and makes his way down to the corner, one of his favorite places to start an attack. He has Kyle Anderson on him, and Slow-Mo doesn’t move quickly enough to fall for anything in DeMar’s bag of tricks. He gets to the baseline, but Kyle’s still in excellent defensive position as DeMar passes through the paint.

Bryn Forbes drops down to the corner to give DeMar an outlet, and catches the pass just as Mike Conley recovers. Bryn immediately drives to his left, but pulls up short of the paint when Jaren Jackson Jr. digs down. Bryn’s awkward jump is the first sign that not all is going according to plan. Rudy Gay catches the pass, takes a brief pause, then drives by Jackson into the paint.

With both Conley and Marc Gasol waiting for him, Rudy pulls up for a 9 foot floater (hooray) that clanks off the front of the rim (boo). He grabs the offensive rebound, and after throwing a little shoulder into Gasol, goes back up for the easy layup (hooray). The ball almost falls through the hoop before defying the laws of physics and all that is good and holy (boo). Seriously, this didn’t go in (boo).

After a full lap around the rim, the ball drifts off the front edge (boo). Then LaMarcus Aldridge tips the rebound back to Rudy (hooray), but Garrett Temple knocks it away (boo). Temple’s first dribble ricochets off Conley’s right foot (hooray), but LaMarcus dives on the floor for it for some reason (boo?). I appreciate LaMarcus’ effort here (hooray), a near 7-footer diving on the floor for a loose ball deserves an awful lot of credit (double hooray), but this ball is clearly heading out of bounds and the shot clock reset when Temple gained control of the ball, so… (boo).

LaMarcus tries briefly to recover a dribble, but isn’t able to, which is really the only sensible thing that happens here (hooray). Him getting his feet back under him with a live dribble in the midst of a scramble is not a scenario likely to go the Spurs’ way (boo). Instead, he grabs the ball with both hands and rolls onto his butt with the ball over his head (hooray).

Gasol and Temple, both apparently tired of being stuck in a play straight out of a pickup game at the Y, play that level of defense against the Spurs’ big man who’s stuck on the floor (hooray). LaMarcus spots Bryn racing down the middle of the floor (hooray) and raises up just a little to put some extra oomf on the bounce pass (hooray). He threads the ball through traffic and past Gasol’s half-hearted attempt at a kick save. Bryn catches it cleanly (hooray) and uses his two steps to create a little space between himself and the closing Anderson before hitting the floater (double hooray).

Late in the third, the Spurs made lemonade again.

Marco Belinelli brings the ball up the right side of the floor, and Davis Bertans briefly looks to set a screen before popping to the top of the key. Jakob Poeltl runs out near the three point line and takes the pass from Marco. Jakob sets for a potential dribble hand off with Marco, but Anderson’s all over it, so Jakob dribbles towards the center of the floor to transition into the next part of the play. It’s unclear what that was supposed to be, because he developed baby giraffe legs after putting the ball on the floor.

It appears that Anderson has reached near-Manu-levels of awareness on the court and either drops his right foot behind him just as Jakob steps with his left, or it’s an accident. One of the two. As Jakob tumbles to the ground, he tries desperately to tip the ball to Davis and just barely succeeds.

Davis gets to the ball first, and after absorbing a light tackle from JaMychal Green, flips it toward the sideline. This is the danger of wearing the same colors as the refs: sometimes your players get confused in the heat of the moment.

Luckily, Patty Mills is within diving distance. He’s able to get a paw on the ball and sling it to Jakob in the paint as he floats out of bounds. Free of Anderson’s trippery, Jakob gets an easy dunk. No fouls on this play, though. Just a trip and a tackle, nothing to see here.

The Spurs nearly turned two other broken play / lost ball situations into points, but Bryn was unable to knock down the three on either. It’s good to see the Spurs’ winning the battles for loose balls, but it would be nice if they didn’t lose it in the first place. As much fun as these roller coaster plays are, hopefully this was just a one-night show.