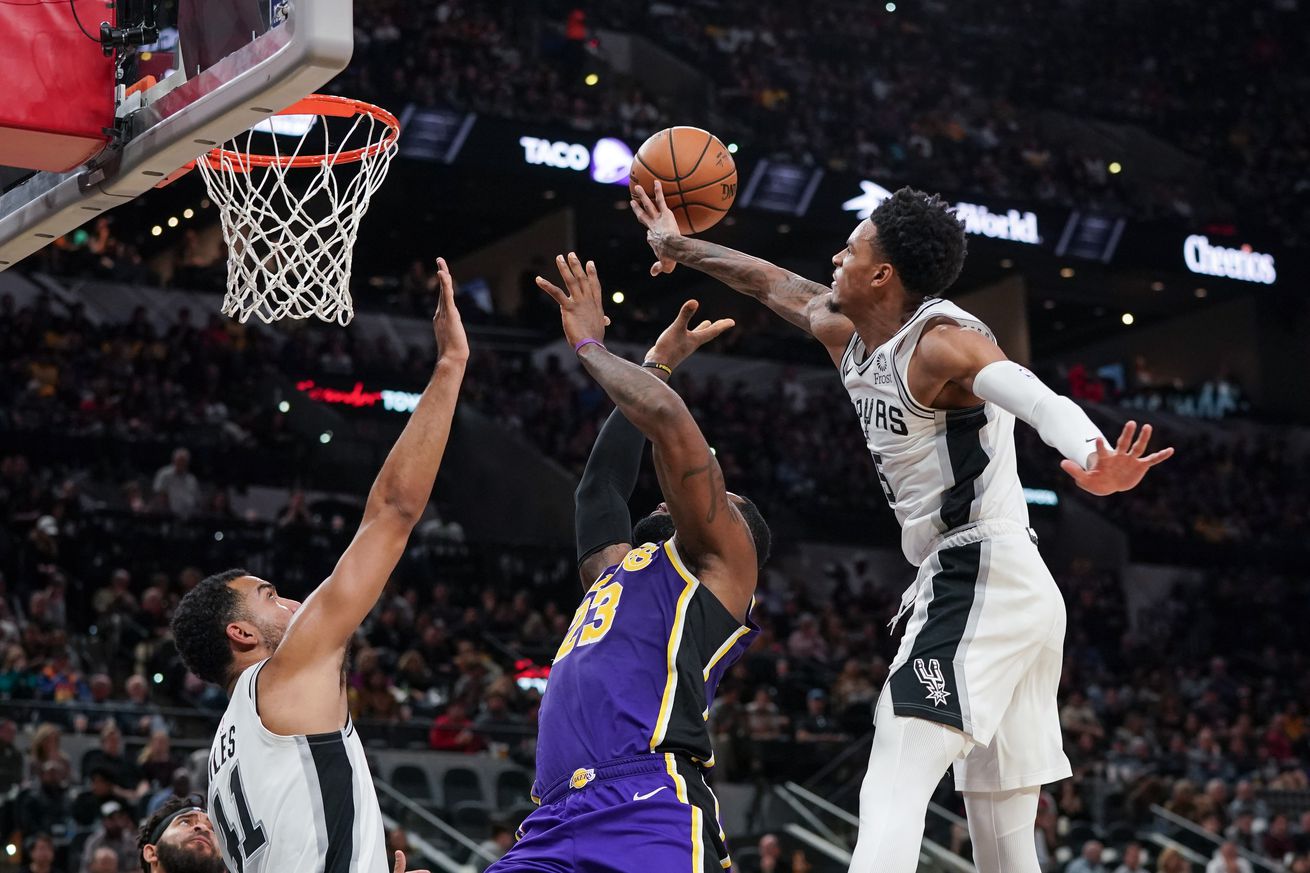 After missing all of last season with an ACL injury, Murray has a new extension, the keys to the Spurs’ offense and three Hall of Famers in his ear all game long.

Midway through the second quarter of the Spurs’ 121-112 win over Oklahoma City, Dejounte Murray was beaten on a backdoor cut by Hamidou Diallo, leading to an easy two points for the Thunder. While it’s the kind of mental lapse any NBA player will have from time to time, it was reason enough for Gregg Popovich to gesture over to Derrick White, warming up on the stationary bike some 20 feet away, to check in and allow him to have a word with Murray, who listened attentively, as he always does, before being subbed back in 30 seconds later.

The Spurs’ 4-year, $64 million extension of Murray last month was only a part of their investment in the 23-year-old, who reassumed his role as the team’s starting point guard after a year off recovering from an ACL tear. The early results, even while on a minutes restriction that has limited him to 23 per night, have been impressive: 12.9 points on 50.7% from the field, 8 rebounds, 5.4 assists, and 1.7 steals per game.

“Well, Dejounte, in some ways he’s a work in progress,” Pop said after Murray’s 15-point, 10-assist, 8-rebound performance against OKC. “But if that work in progress can do what he did tonight, that’s pretty good.”

When it’s not Pop in Murray’s ear, it’s assistant coaches Tim Duncan and Becky Hammon, both of whose jerseys are currently hanging in the rafters of the AT&T Center. Up and coming players are lucky to have a direct line to even one Hall of Famer; Murray has three in his corner on a nightly basis, constantly imparting wisdom in the moment that tells him what he did right and wrong and allows him to recalibrate appropriately.

“That’s my big bro for sure,” Murray said of Duncan. “As far as right now, he’s Coach Tim… He’s always there, trying to help me with anything, whether it’s in the gym or in film. As you guys can see, he’s always pulling me [over]. He’s always talking to me and I really appreciate it. I love to work; I love to learn; I always feel like there’s room for improvement… and having a great dude like that around just helps.”

Mentioning traits like humility or teachability will rightfully roll some eyes, but you simply won’t find many young athletes who so genuinely commit to doing things The Right Way like Murray. Appearing after his near triple-double on Thursday, he first glanced over a reporter’s shoulder to check how many turnovers he’d had (2, to his 10 assists) before stepping into a scrum. Every post-game quote could print on a motivational sports poster, if it hasn’t already, but it’s all too candid and unflinching to be considered performative, and it represents intangibles that are real difference-makers as he looks to continue bridging the gap between his physical tools and a still-raw skillset.

Defensively Murray seems to be picking up where he left off after being voted to the All-Defense 2nd Team in 2017-18. There isn’t a good catch-all metric to capture his impact, but consider how many ways he improves a team — his elite rebounding for his position, that the players he’s defended are shooting 4.9% worse from the field and that, in limited minutes, he’s among the league leaders in deflections per game (2nd only to Jrue Holiday) and pushing the top 10 in steals per game — and you get the outlines of the same game-changing defender fans were hoping to return.

Checkout this great sequence as DeJounte Murray get’s the block and DeMar DeRozan finishes with the and one! pic.twitter.com/rksH5yi1uR

Offensively, the team is easing Murray into things after a year off, not only in the minutes he’s playing but in how they’re opening the playbook for him. In taking the ball out of the hands of DeMar DeRozan, who operated for much of last season as the team’s de facto point guard, the Spurs are letting Murray get accustomed to the reads and counters that get the Spurs into their half-court sets, while having him operate in the pick and roll or pick and pop, mostly with LaMarcus Aldridge. Go back and watch most of his 10 assists from Thursday and you’ll see most benefited from Aldridge’s hot hand on a night in which he couldn’t miss.

A large chunk of Murray’s shot attempts within the set offense have been either pull-ups coming around a pick and roll or opportunities from kick-outs off of post-ups, and he’s done enough with those opportunities — even with his three-point shot not falling in the early going — to demonstrate meaningful growth from the 2017-18 season.

131 of the 167 minutes Murray’s played this season have been with Aldridge, who’s an ideal running mate in several ways. Here Aldridge, who’s rebounding numbers can undersell his actual effort on the glass, boxes out the Thunder’s Steven Adams, allowing Murray to pull down the board and get the team out in transition, by design. Murray then rewards the big man for running the floor by setting him up for the finish.

Already, defensive rebounds and live-ball turnovers are an open mandate for him to push the pace and make things happen in the open court, which is why he ranks 6th in the NBA in transition possessions per game despite a cap on his minutes. He’s scoring 1.3 points per possession on those opportunities, making it one of the more efficient forms of offense for the Spurs, who rank 2nd in that category through their first 8 games.

DeJounte Murray with the layup gives the Spurs their first points of the night. pic.twitter.com/X2IzodVaHX

Everyone has to adapt here, which often means making compromises. Touches for DeRozan, Aldridge, Rudy Gay and Patty Mills are all down from 2018-19 to varying degrees amid the transition; Aldridge’s post-up touches per game have decreased from 12.4 to 8.5; Derrick White, last year’s starter, shifts back into a bench role and is learning to play with a stylistically different unit; everyone who shares the floor with Murray has to be ready to run. The starting lineup, despite some flashes and a strong showing against OKC, hasn’t looked like a well-oiled machine on offense or defense just yet, with a +1.2 net rating in their 7 games together.

The Spurs are counting on the payoff being worth it. It’s not just Murray’s upside as a potential two-way star, but years of stability that he can offer at the point-guard position as the team looks ahead to a new era. He may not become San Antonio’s Steph Curry, but we saw in Golden State the fruits of an organization locking in a foundational piece at a below-market rate. If Murray continues on the path he’s set early this season, the front office should see a significant return on the investment they made with the extension, and that they’re continuing to make in how they operate.