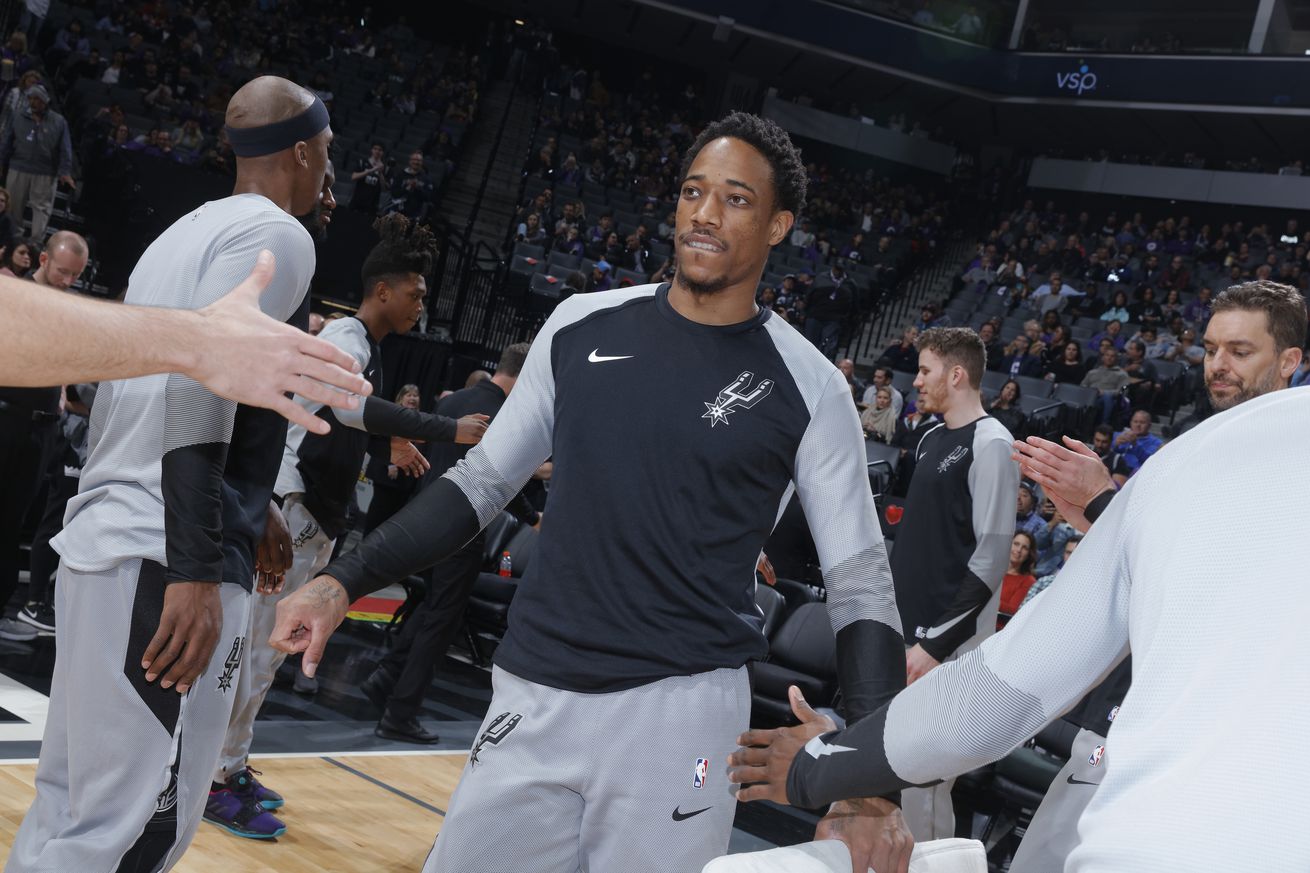 The 2019-20 Spurs are so deep, the list of productive five-man units Pop could use is a mile long.

The Spurs have a fascinating amount of flexibility built into the roster they’ve assembled for the upcoming season. The team has an embarrassment of riches at guard, a solid wing rotation, and two outstanding bigs, with youth and potential on hand everywhere the rotation looks thin. They can play big or small, fast or slow, and have the talent to win shootouts or try to pitch a shutout.

The team has plenty of veteran experience, with 6 players who’ve spent more than 10 years in the NBA. But they also have a growing youth movement poised to carry them into the future, with 11 players who’ve played 4 seasons or fewer.

The roster lacks the star power of a top end team, and it’s fair to question whether they have enough shooting for today’s NBA, but the Spurs managed to make a similar situation work last season, so it’s reasonable to expect little change in that department.

Marksmanship limitations aside, the ability to mix and match players from all over the roster into unique and capable lineups should make Gregg Popovich’s usual regular season tinkering even more pervasive this year. There might actually be too many interesting combinations to try out to get to all of them.

Still, within the myriad possibilities are quite a few that are especially intriguing for one reason or another. Questions about who will start and finish games aside, here are some lineups the Spurs absolutely have to roll out at some point in 2019-20.

Can you defend LaMarcus Aldridge straight up?

Let’s find out if the other guys have someone who can stop the big fella. Put LaMarcus Aldridge on the court surrounded by shooters and see what happens.

Key #s: Patty, Bryn and Rudy shot a combined 42.9% (295/688) on catch and shoot threes last season. DeMarre was considerably worse, at just 34.8% (96/276), but he’s a career 36% three point shooter, so it’s fair to expect he’ll hit a higher percentage on the types of open catch and shoot looks he’ll get in this lineup. In 292 minutes of play last season, the Spurs scored nearly 124 points per 100 possessions when LaMarcus shared the floor with some combination of Derrick White, Patty, Bryn, Marco Belinelli, Davis Bertans or Rudy.

Considerations: Station Bryn and Patty on the wings or at the top of the key 2 or 3 feet off the three point line. Both have the range to knock that shot down consistently, which will put a ton of stress on the help and rotations.

Alternatives: Sub in Derrick White or Lonnie Walker IV for a more defensively inclined version of this, replace DeMarre with Marco for a more free-wheeling version, or maybe put Trey Lyles in for Rudy, if his shot returns.

When a stop wins the game

Two bigs may not be the best answer in a late game situation where the defense needs to be able to switch across all five positions, but when it is feasible, this unit is going to make it very difficult to get a bucket.

Considerations: It’s going to be a hard life for opposing offenses that are guard-driven. Getting Dejounte or Derrick to switch when they don’t want to is almost impossible, and even if you do, they’re still going to swarm you on the way to the rim.

Alternatives: Sub in DeMarre or possibly Keldon Johnson for Jakob for a smaller version of this. If the team really needs to switch, use the next lineup.

All switching, all the time

Great for late clock situations against a team that needs a three or against a lineup that doesn’t have a scoring big.

Considerations: A lineup this small likely wouldn’t work for long stretches and would certainly struggle against dominant bigs, but in short bursts, it could be vicious. If you’re the opponent, what’s the play? Try to attack Dejounte or Derrick in the post? Drag Chimezie out to the perimeter? The speed of help and rotation with this lineup should make even those options a dicey proposition unless you’ve got a dominant isolation or post up player.

Considerations: Have LaMarcus and Jakob set staggered screens for whoever has the ball with LaMarcus popping to the three point line and Jakob rolling hard. Or run side pick and rolls and dribble hand offs back and forth on both sides of the floor until the defense breaks. Either way, there’s going to be a lot of fouls drawn on defenders trying to fight over screens and accidentally running into shooters pulling up from three. Perimeter defense might be an issue, but it won’t matter against most bench-heavy units.

Alternatives: Bryn would be a natural fit in this lineup as well, next to either Patty or Lonnie, and if Derrick’s shooting continues to progress, he could be an interesting substitution as well.

It’s gonna be a shootout

Ever wish the Spurs would win quarters 40-38 more often?

Key #s: The four returning Spurs made up 80% of the team’s best scoring lineup last year. The fifth player, Davis Bertans, may have been the most important ingredient, as he was a part of 7 of the team’s top 8 lineups in offensive efficiency, per Cleaning the Glass. But DeMarre should be able to replicate some of what Davis provided in terms of relocating along the perimeter and coming off screens. He won’t hit nearly as often as Davis’ 42.9%, but this group has more than enough shooting to make it work.

Considerations: Okay, they might not win the quarter, but it’ll still be exciting.

Alternatives: Replace Bryn with Derrick and Jakob with LaMarcus to watch Derrick repeatedly cut to the basket for dunks and layups.

This ain’t the beautiful game Spurs, but Patty and Marco together can recreate some of the old magic.

Key #s: Lineups with Patty, Derrick, Marco and Jakob scored 115.0 points per 100 possessions in the halfcourt, which was in the 100th percentile, per CTG, over the course of 193 possession of play. Luka isn’t yet the best offensive player available to fill that 5th spot, but his style of play should fit right in with the overall motif here.

Considerations: Derrick is a good distributor and a great cutter who’s excellent at moving without the ball, while Luka showed impressive passing chops in Summer League. Jakob is an outstanding screener and roll man who will always do well with ball handlers who are a threat to pull up from deep. That ought to give Patty and Marco enough daylight to create an advantage and get the ball moving.

Alternatives: There doesn’t really appear to be any, at this point. It’s not that the rest of the roster is filled with selfish players, far from it, but the team is a little light on ball handlers who move well off the ball and can shoot, pass or drive in an instant, at least at the moment. Lonnie appears headed in that direction in a hurry, though, so that might change by season’s end.

Considerations: There’s not a lot of quickness on the floor with this group, so this would definitely need to be a matchup based decision, but there are at least a few teams, like the 76ers, where it might be necessary.

Alternatives: Replace Jakob with DeMarre (6’10”) to get almost as much wingspan with a lot more lateral agility.

For a moment after trading Bertans, it appeared the Spurs were going to have only 4 foreign born players on the roster for the first time in over a decade. But then they signed Trey Lyles, from Saskatoon, Canada, averting a potential disaster.

Key #s: With Patty (31) and Marco (33) steadily closing in on the downswing of their careers, 19 year old Luka seems like the best bet to carry on the legacy of this hallowed tradition.

Considerations: That’s an awful big lineup, probably too big to survive, but it’s a sacrifice the Spurs should be willing to make.

Alternatives: Chimezie was born in Los Angeles, but plays for the Nigerian national team, so he could conceivably slide in here in a pinch but doesn’t really help much with the size issue.

Over a third of the roster came out of the Pac-12, which isn’t particularly surprising given that they had the 2nd most players on NBA rosters at the beginning of last season.

Key #s: With 5 players from the Pac-12 who are 25 or younger, the Spurs might be able to keep this going for quite some time.

Considerations: That’s actually not a bad lineup, except for the whole three point shooting thing. Would’ve been a nightmare in 1989, though.

Speaking of 1989, the Spurs should double down on their throwback offensive style, at least for a few minutes.

Key #s: The Spurs took 52.4% of their shots in the midrange with Derrick, DeMar, Rudy and LaMarcus on the floor last season, which was in the 99th percentile, per CTG. It seems unlikely Dejounte’s presence would reduce that number.

Key #s: With a combined 58 years of NBA experience, this will likely be one of the most seasoned groups that sees actual playing time in the league this season.

Considerations: Definitely won’t see this one on a SEGABABA.

Alternatives: DeMar also has 10 seasons of experience and is the only other player on the roster born in the 80s.

They probably won’t make it onto the court together this year, but this five could very well become a staple of the team’s future.

Key #s: At just 7 years of NBA experience, if this lineup sees the floor, it’ll be one of the least experienced lineups in the league.

Considerations: Probably need to run this one out in a blow out, otherwise the silly mistakes might cause ulcers, but the highlights will be fun!

Alternatives: Drew and Chimezie are both just 22 years old as well, so either could sub in for Jakob, making the group even younger, or for Luka to add a little experience. Quinndary Weatherspoon (23), Derrick (25) or Bryn (26!) would all fit in just fine, too.

That’s just a small sample of all the possible combinations. With at least 12 rotation-quality players and a trio of talented rookies, this year’s Spurs are incredibly deep, which means the lineup possibilities are essentially endless. What lineup(s) are you looking forward to seeing?