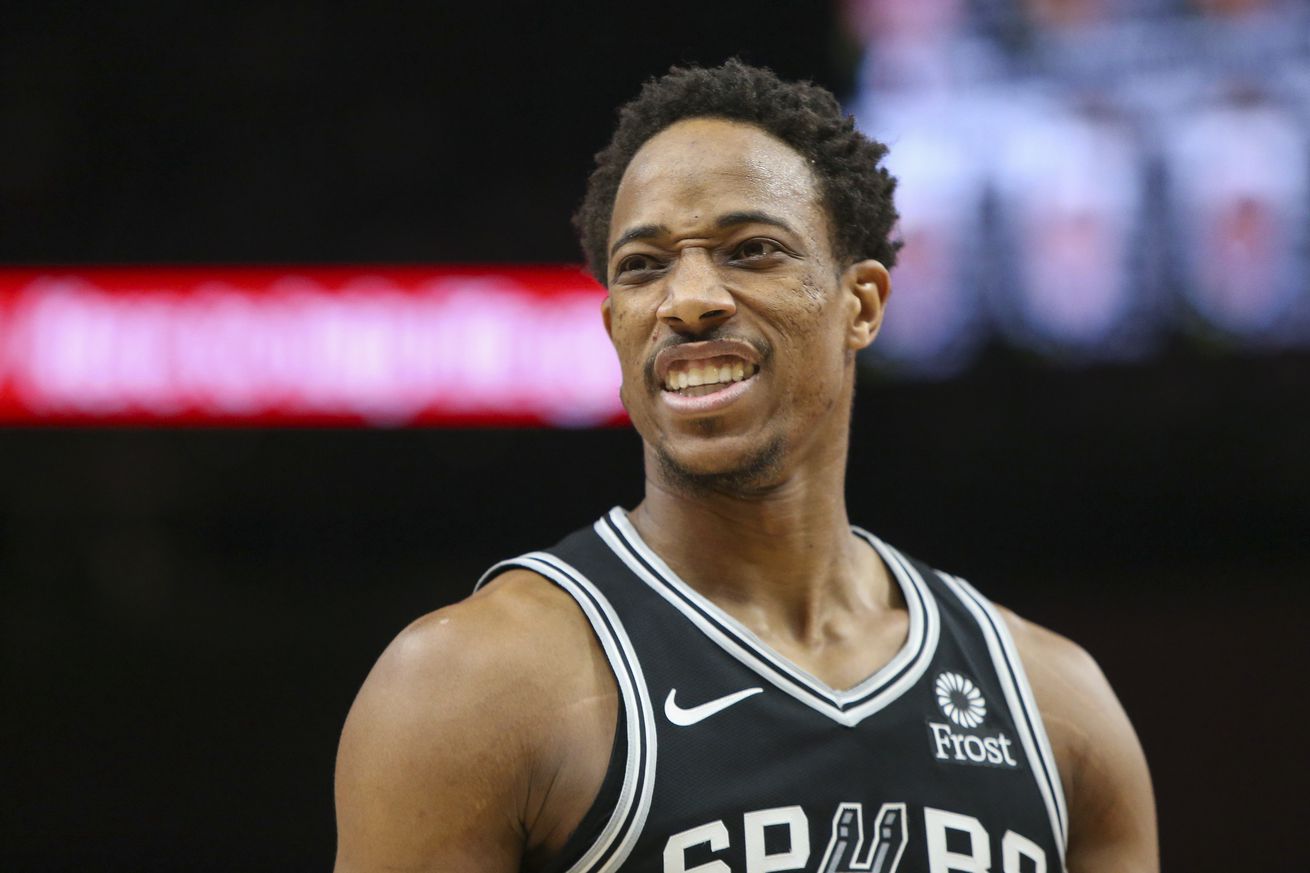 DeRozan has been good for the Spurs, but extending his contract would undo a lot what they have been building for the future.

The Spurs haven’t ruled out offering DeMar DeRozan a contract extension, according to SAEN’s Mike Finger.

While the report was carefully worded to suggest nothing is imminent, the mere fact that extending DeRozan is a possibility is both intriguing and a little confusing. It makes some sense from a cap perspective if the franchise wants to commit to the veteran guard, but it just doesn’t feel like a good idea to do so.

The first thing to understand is that an extension would help the Spurs retain DeRozan without committing to him for too long. When it comes to veterans, contract extensions can only be for five years, including the remaining years on the contract. Assuming the Spurs and DeRozan actually reach an agreement on a max extension before the June 30 deadline, he’d be on the books until 2024. If instead DeRozan plays out this season, declines his player option and enters free agency only to re-sign with the Spurs for as many years as possible, his contract would run until 2025. If he were to opt in after next season in order to become a free agent in 2021, a new five year contract with the Spurs signed in that offseason would run until 2026, when he would be 37 years old.

There is also a financial motivation for the Spurs to get DeRozan to sign an extension instead of attempting to re-sign him after he becomes a free agent. On extensions, a player can only get a max first-year salary of 120 percent of the salary of the last year of his contract. For DeRozan, it would mean that after playing out his current deal, he’d get a starting salary of around $33 million in 2021, with eight percent raises in the following two seasons. If he were to opt out after next season, however, he could re-sign for 35 percent of the cap, estimated to be set at $116 million, and earn around $40 million in the 2020/21 season with eight percent raises in the following four years. An extension would allow the Spurs to retain DeRozan on a much cheaper deal.

It clearly does make some sense for the Spurs to try to work out an extension with DeRozan if they want to keep him around long term. The problem is they probably shouldn’t.

The Spurs’ two most promising young players, Dejounte Murray and Derrick White, are not even league average shooters yet. It’s going to be a challenge to play them together even next to teammates who can shoot. DeRozan, for all his gifts as an offensive player, is not one. Assuming the Spurs see Murray and White as the backcourt of the future, extending DeRozan to play small forward next to them makes little sense. If they do, they’d be betting on three below average shooters making significant leaps as marksmen in the next couple of years. It’s not impossible, but it definitely doesn’t seem likely, since DeRozan has failed to develop a three-pointer in 10 seasons in the league, and Murray was the worst outside shooter among starting guards in his last healthy season. It would be extremely hard to build an elite offense without shooting on the perimeter.

It’s possible the Spurs don’t actually envision playing White and Murray together much, instead hoping one can be the sixth man. Even under those circumstances, extending DeRozan could hurt their youth movement because two of the other intriguing first rounders on the roster play the same position as him. Lonnie Walker IV will likely need minutes soon, and Keldon Johnson has a well rounded game that could allow him to become a rotation player early in his career. If DeRozan gets his usual 30+ minutes a night, and Murray and White get a bump in playing time starting next season, there just won’t be room for the young wings. For the next year or two that won’t be a big problem, but if by 2022 DeRozan is still around, it could be.

The reason why it’s a little confusing to see reports about the Spurs potentially considering extending DeRozan is because they simply seem to be going in a different direction with their other moves. They currently appear to be set up perfectly to continue their youth movement while clearing their books of big contracts for veterans by 2021. An extension to an aging star who plays the same position as some of their most promising prospects just doesn’t align with that plan. If DeRozan was a true franchise talent it would be understandable to lock him up even if there were questions about his fit, but he simply isn’t one. The core he forms with LaMarcus Aldridge is certainly good for now, but Aldridge could be gone or in decline by the time a DeRozan extension would even kick in.

Extending DeRozan wouldn’t be the worst thing the Spurs could do since he’s a good player who fits their current playing style and should remain a solid contributor for a few more years. It typically makes sense to lock down that type of piece if it can be done at a reasonable price, but not under the current circumstances. It’s downright confusing that they are even considering it when they’ve seemingly set up their reloading process to be all about youth and future cap flexibility.

DeRozan is good. He makes sense in San Antonio during this transitional process and could help them a lot in the next two seasons. After that, his presence on the roster would create more questions than answers about what the Spurs’ plan actually is.

The case against the Spurs offering DeMar DeRozan a contract extension
Source: Pounding The Rock