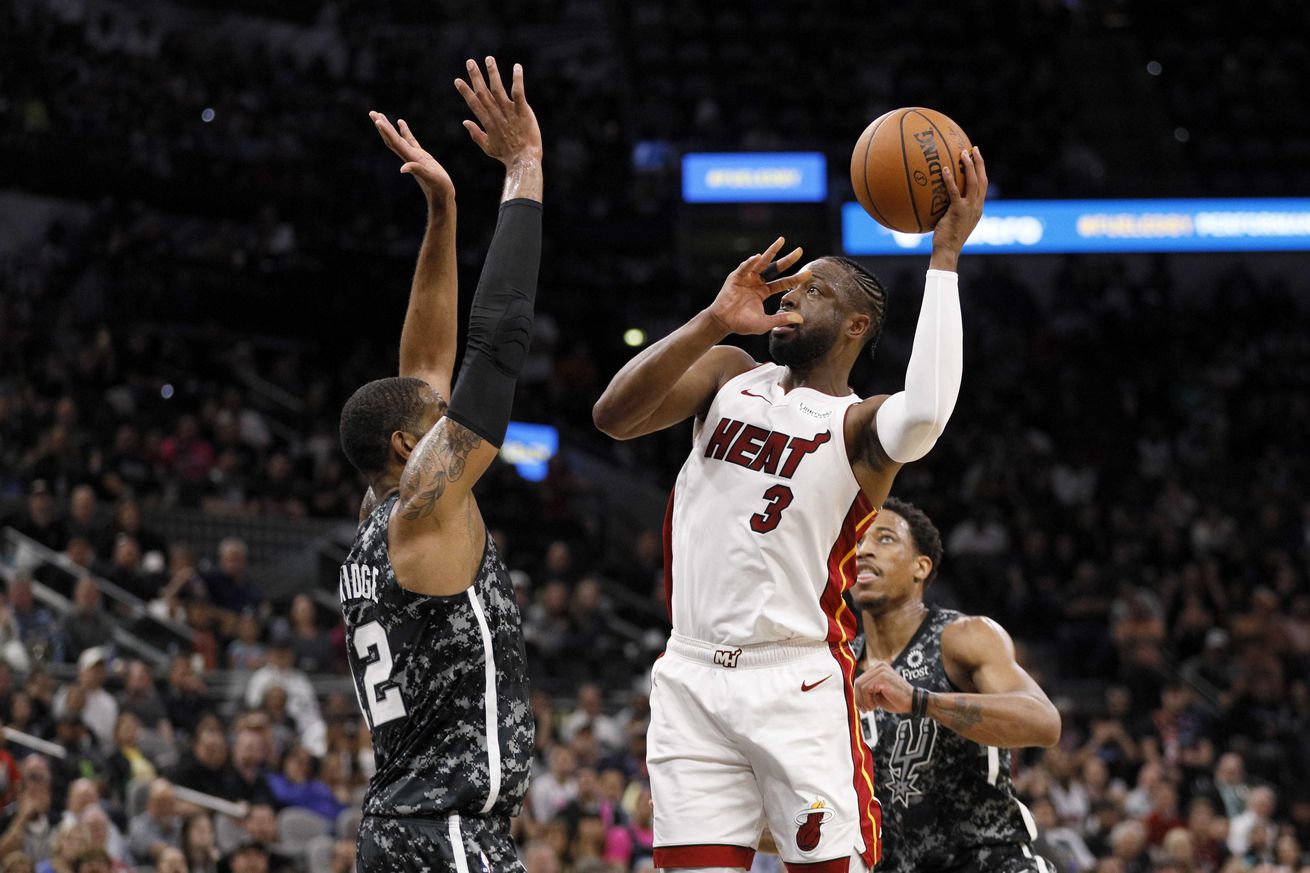 A late rally wasn’t enough to make up for a slow start and a Heat zone defense that San Antonio struggled to crack for most of the night.

The past and present bleed into one in the Late Popovich Era. From the Jumbotron shots of a smiling and waving David Robinson, his 7-foot-frame neatly folded into his usual 2nd row seat, to the revolving door of proteges-turned-head coaches that return to the AT&T Center and the impossibly high bar this team is held against, it’s vividly clear how much basketball the Spurs coach can peel back at any moment. That is, until you, very smart blogger, follow up Pop’s thoughtful pre-game reflections on the career of Dwyane Wade — visiting San Antonio for the last time as an NBA player on Wednesday — with a question about his team’s low foul rate, to which he responds by reminding you, kindly, that “We do that every year — for 20 years.” Try as you might you cannot turn back the clock, not even a few seconds earlier when you decided to speak.

Indeed Pop’s Spurs have a long tradition of limiting fouls as part of their defensive strategy, one that continued on Wednesday (13 total) in their 110-105 loss to the Miami Heat.

“That’s just our philosophy,” said Pop, expanding on his answer. “It doesn’t mean it’s right. Other teams foul like crazy, and that’s smart, too, because they don’t call everything. You know, after a while, it just becomes normal and you get away with some stuff. Either philosophy works — you just have to play it and, again, it’s about habits and discipline.”

The Heat don’t foul with reckless abandon (they were at their average of 21), but they do bring a level of physicality that can — and did — throw off a San Antonio squad that likes to establish a rhythm from the inside out. Big guards and a frontcourt that gives up few easy baskets inside made for a long night for the Spurs, who came in riding a league-best 9-game winning streak.

Also helping Miami out was another blast from the past — a 2-3 defensive scheme that Erik Spoelstra turned to almost immediately and rode for most of the night. For the Spurs’ dreadnought offense, the Heat’s zone (a throwback tactic that’s been en vogue across the league this season) proved a formidable foil, choking passing lanes, negating the Spurs’ typical use of off-ball screens, preventing creatures of habit, DeMar DeRozan and LaMarcus Aldridge, to get the ball in their preferred spots, and forcing shooters to take whatever they were given rather than naturally seeking out good-to-great opportunities.

“We’ve got to be more conscious of what teams run zones on us,” said DeRozan (16 points, 15 rebounds, 6 assists) afterwards. “How we need to attack it by moving it, shifting it, guys finding open areas and exploiting the holes in the zone. We were trying to do the opposite and falling into their hands with the zone.”

“Yeah, the zone throws everybody off,” agreed Pop. “But we finally did a better job against it.”

The Spurs did improve as the night went on, finding ways to break the zone and set up open looks while tightening up their own defense, but it was too little, too late. A 4th quarter rally helped trim a deficit that was as great as 18 down to 3 with under a minute to go, but their final pair of opportunities — an open Rudy Gay three-pointer and a DeRozan transition push that led to a turnover — sealed San Antonio’s fate.

While DeRozan accepted he could’ve done things differently on that final possession, don’t expect the team to pin the loss on anything that transpired late. “If you don’t play for 3 of 4 quarters in the NBA you’re gonna have a problem,” said Pop. “It’s not much more complicated than that.”

The man of the hour, Dwyane Wade, looked to make sure that his pregame tribute video was not the emotional peak of his night. The 37-year-old guard scored 11 points off the bench, which included a half-court runner that beat the 3rd-quarter buzzer and an off-balance left-handed bank shot in the 4th quarter that helped keep a feisty Spurs team at bay.

And the Spurs did battle, something Pop made note of:

“The best part of the game is that we played in the 4th quarter… but I was really proud of them for sucking it up, picking up their heads and busting their ass in the 4th quarter and getting back in the game. We had a 3-pointer to tie it down the stretch, so they deserve a lot of credit for working themselves out of the doldrums that they were in. Give credit to Miami because they were physical, they were aggressive all night long… for 3 quarters they whipped us physically and discipline-wise, and they deserve the win.”

Wade’s iconic night coincided with vintage games from Goran Dragic (22 points off the bench) and Dion Waiters. Waiters Island, to borrow a Zach Lowe-ism, long believed to have succumbed to rising ocean levels, had a resurgent performance, belching up seafoam and raining stepback jumpers to score 18 points, his best offensive game in a month. For Miami, who’s in its own playoff hunt, the performance didn’t come a moment too soon.

Over their upcoming 3-game road trip, the Spurs will face tougher trials than the physicality and tactical curveballs Miami threw their way, with opponents like Houston and Boston. We’ll see which part of the past carries forward — the team that won 9 straight, or the one on the floor for most of Wednesday.

Patty Mills with a strong (and milestone) night

Mills moved into the franchise’s top 10 in games played with 521. He had 17 points and 6 assists and was perhaps the best Spur on the floor overall on a night that starting point guard Derrick White (1 for 8 from the field) just didn’t have it.

Shifting away from tall ball

Moments before the start of the third quarter, Pop appeared to change his mind about his lineup, pulling starter Jakob Poeltl and subbing in Rudy Gay, which was perhaps a window into the wider thought process of the night. Poeltl totaled just 14 minutes on Wednesday (still collecting 8 rebounds in that span), with the Spurs looking for more spacing against Miami’s smothering scheme.

Pop, on what made Dwyane Wade special

“It’s not just because of the way he played. He played hard, played to win, had a ferocious attitude on the court. But it was matched by a wonderful smile and a great understanding of the world and the community off the court.”