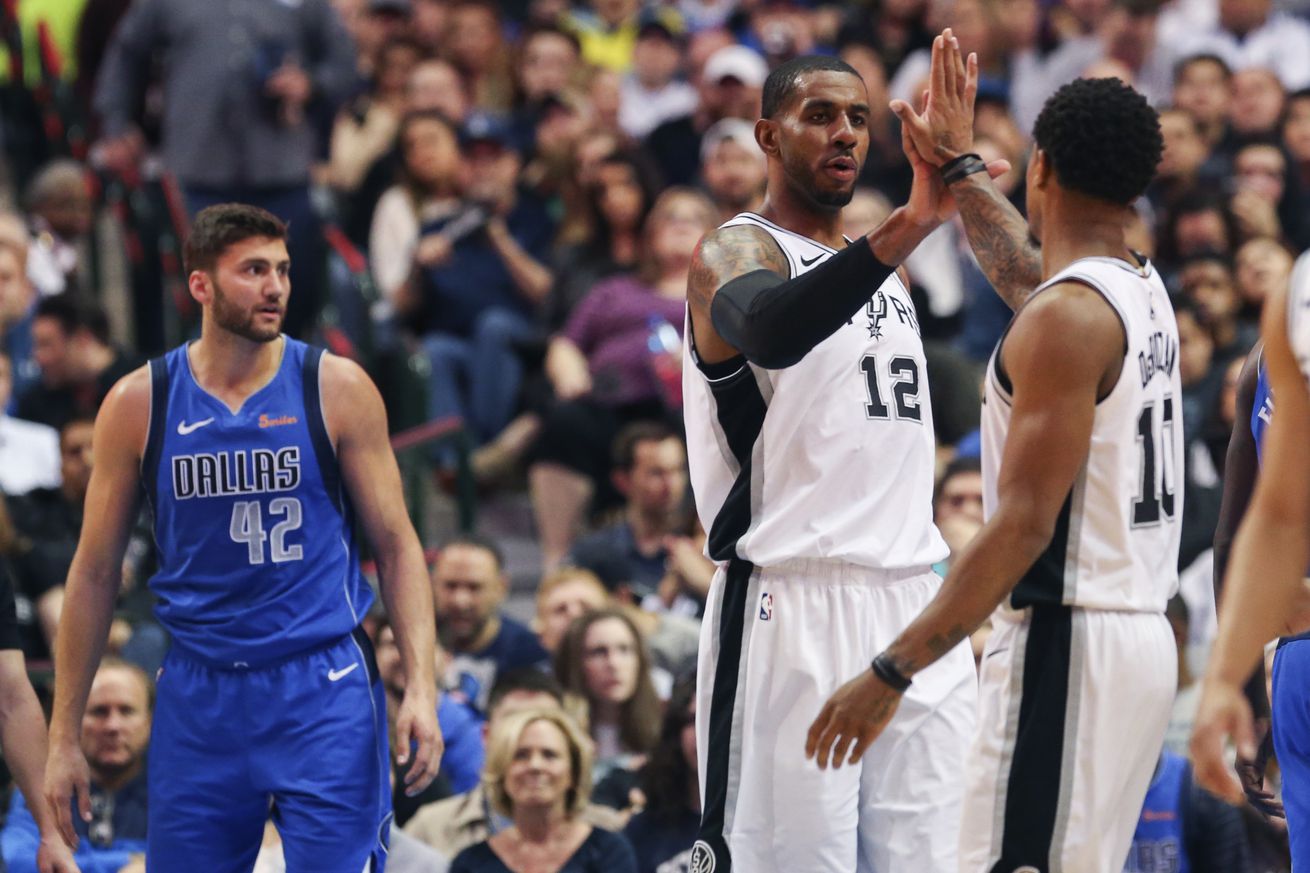 Behind great performances by the stars and Derrick White, the Spurs prevailed in a close game on the road.

It wasn’t too pretty but the Spurs managed to extend their winning streak to six by besting the Mavericks on the road, 112-105. The game was closer than it should have been, but San Antonio managed to outlast a Dallas team that couldn’t seize the chance to play the spoiler.

After the first few minutes it was hard to predict that his one would go down to the wire. The Spurs seemed confident and in control early on, as their two stars and Derrick White got whatever they wanted on offense against an outmatched Mavericks defense. The simpler the attack, the easier it seemed for San Antonio to put points on the boards. Dallas simply had no one who could check LaMarcus Aldridge or DeMar DeRozan one-on-one and the home team was repeatedly burnt by White in simple pick and roll action. The only reason the Mavs were surviving despite not getting stops were their timely three-pointers. As soon as those opportunities to fire from outside disappeared, San Antonio created separation thanks to an inspired DeRozan, who dropped 16 points in the opening quarter.

Aldridge and White picked up where DeRozan had left off, combining for 17 points in 11 shots in the second period. With the stars playing at such a high level and Luka Doncic struggling greatly (partially because of a lingering knee issue) a blowout appeared to be in the cards. Unfortunately the Spurs can rarely pull those off because of their lack of volume three-point shooting and inability to string together stops. It’s an issue that has been in effect all season and one that became evident in the second quarter, when they only managed to score 26 points to the Mavericks’ 29. To be fair, the Mavs deserve credit for being smart about how they defended. Rick Carlisle seemed determined to limit the supporting cast’s impact and make the stars beat his squad by staying on shooters to prevent a barrage that could have ended the game.

It wasn’t a bad strategy. Aldridge dominated in the third quarter and DeRozan and White pitched in, but the Spurs only hit a couple of three-pointers and couldn’t really get to the line enough to make up for it. On the other end they didn’t have the focus they boasted in the first half, especially during the opening frame. The Mavericks succeeded in making it an ugly game, which was the only way for them to remain in it on a night in which Doncic was a disaster. Energy players like Jalen Brunson and Dwight Powell excelled in that context and did enough for Dallas on offense to make up for the poor decisions of its best player. After three quarter, the Spurs were still in control, up 10 points, but it was clear that the Mavericks were going to make them work for the win.

Dallas had several opportunities to pull off the upset. There’s actually a case to be made that if they’d made their freebies (15-for-26 to the Spurs’ pristine 18-for-18) they could have taken over in the second half, despite not playing a great game. They actually trimmed the deficit to three points twice but couldn’t get over the hump because Doncic couldn’t carry them as he has this season. The Spurs, meanwhile, did just enough to escape with the win. A couple of Davis Bertans triples and a Marco Belinelli four-point play were all the supplementary scoring their top three-players needed in the fourth quarter to keep the Mavericks at bay. Luka missed some key free throws, the Spurs made theirs and closed it out.

It might have not been the most exciting of games, but the Spurs surely don’t care about that at this juncture. Every road win is important, especially one that gives them their longest winning streak of the season. Now a tough four-game homestand awaits, with matchups against the Trail Blazers and Warriors in the horizon.

Up next: Vs. Knicks on Friday

The Spurs get a couple of days off, then will host the Knicks. Hopefully they’ll avenge that terrible loss from late February.