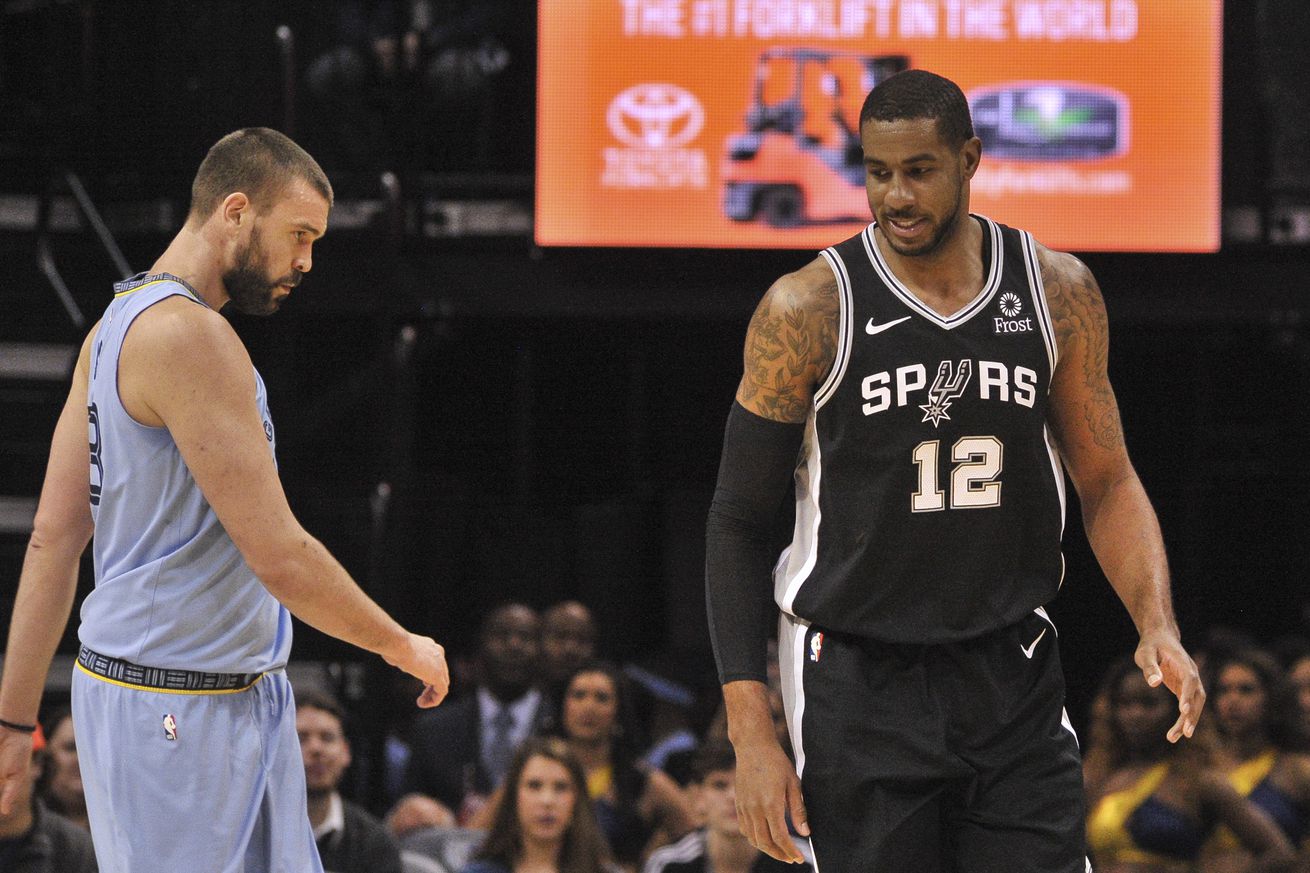 The Spurs couldn’t keep their winning streak alive in Memphis on a night in which nothing went right.

It’s been a while since we had a night like this one, in which nothing goes right for the Spurs. They simply could not catch a break in Memphis and lost 96-86 to a hungry Grizzlies team that didn’t waste the opportunity to snap out of a six-game losing streak.

The game was ugly from the start. It was shocking how similar the first half performance was to some of the worst from earlier in the season. It started with Gregg Popovich deciding to start Jakob Poeltl in place of the injured Rudy Gay for the second game in a row, which proved to be a mistake. The lack of spacing allow an inspired Grizzlies defense to completely defang San Antonio’s attack. The Spurs survived early on thanks to their shot-makers, who got buckets outside of the flow of the offense. Under normal circumstances the bench would have checked in and gotten things back on track, but with Pau Gasol in the rotation, the second unit was clearly figuring out how to get him back into the fold instead of just playing freely like they normally do.

Not all the wounds were self-inflicted. Foul trouble for Derrick White seriously tested the Spurs’ scoring depth, which had already taken a hit with Gay’s absence. The Grizzlies also deserve plenty of credit for causing DeMar DeRozan to go 3-for-11 with three turnovers in the first two quarters. The combination of all of those factors resulted in the lowest scoring half by San Antonio this season, and certainly one of the ugliest to watch since that wretched November. The only lucky break the Spurs got is that it came against a Memphis team that simply doesn’t have the firepower to blow out opponents. Despite only scoring 31 points in the first 24 minutes San Antonio was somehow only trailing by 11 points at the break, which was nothing short of miraculous.

Alas, the weirdness would continue in the second half. Pop adjusted and had Davis Bertans in for Poeltl. That new unit seemed balanced enough to make a run and change the game. Unfortunately White was quickly called for his fourth foul and Bertans was ejected after getting a second technical. Any possibility for the Spurs to regain a sense of normalcy in the second half died there. Surprisingly, there were moments amid the chaos that ensued in which they had opportunities to take control. The Gasol – Aldridge duo had some good stretches and Marco Belinelli caught fire at a point, awakening the offense, which dropped two more points in the third frame than in the entire first half. There was even a time early in the fourth in which the Spurs actually trailed by just four points.

The Grizzlies didn’t panic, though. They clearly needed the win after a six-game losing streak and were not going to let it get away from them. Despite a terrible scoring night by most of their guards, they kept defending and executing on the other end, with Marc Gasol leading the way. They survived that first push and then a late one by the Spurs’ deep bench to secure the victory at home. On a night in which their opponent had a strange, often ugly, certainly poor performance, the Grizzlies deserve credit for simple being steady and closing the game well.

As for the Spurs, they need to put this night behind them. There are some small lessons to learn, but on the whole this game was too strange to reveal anything truly profound about them. The Thunder wait at the AT&T Center on Thursday and a win then would make us all quickly forget about what happened the night before.

Up next: Vs. Thunder on Thursday

The Spurs will take on the Thunder on a SEGABABA at home on Thursday. Then two days later they’ll travel to Oklahoma City for the second game of a home-and-home set, because the schedule makes no sense sometimes.