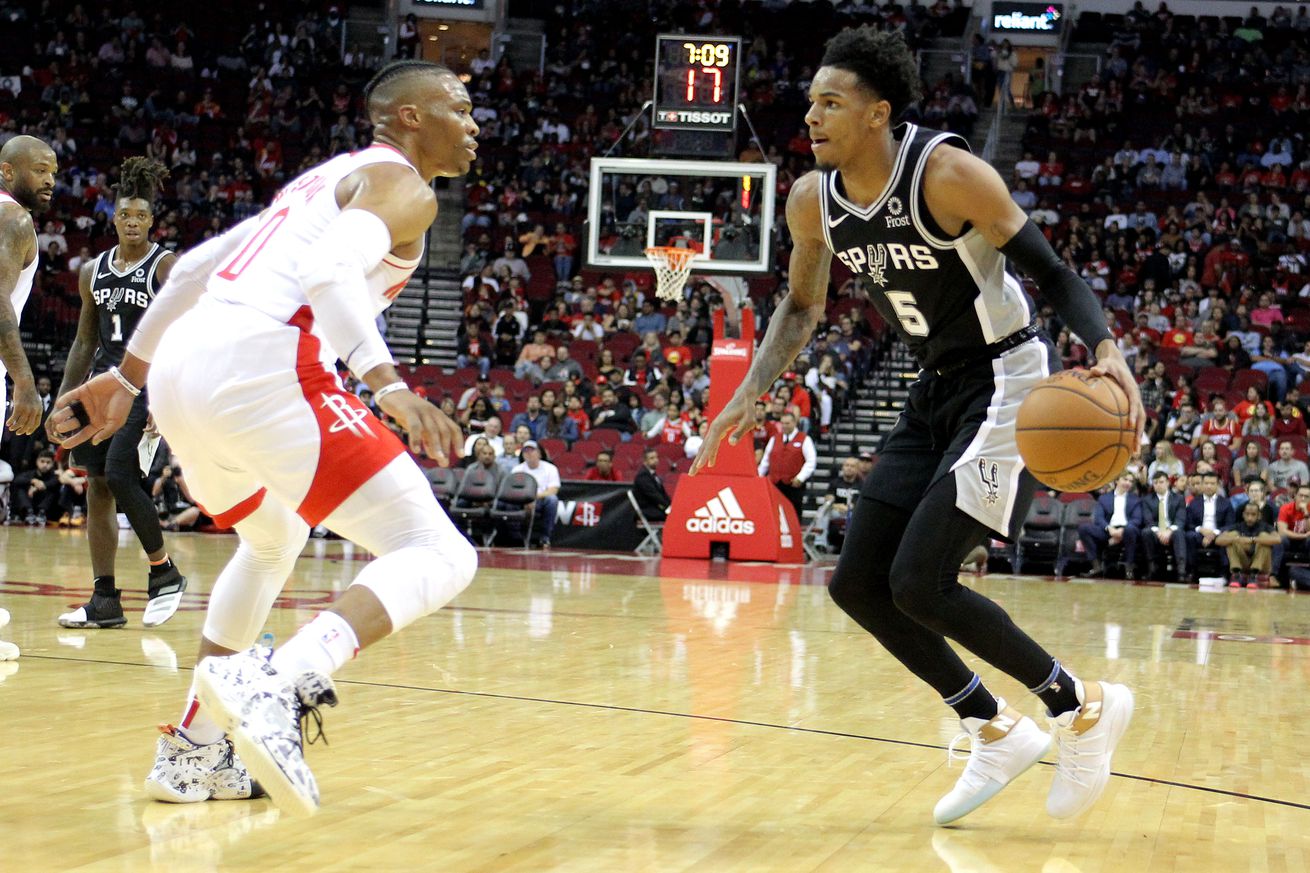 With Dejounte Murray and LaMarcus Aldridge leading the way, the Spurs got their first win of preseason.

It turns out that a matchup against the Rockets was just what the Spurs needed. San Antonio finally got a win in preseason by dominating a lackadaisical Houston team that didn’t seem all that interesting in competing against a hungrier, younger opponent.

Results don’t mean much in preseason, but the Spurs clearly wanted to get a win on their fourth try, and it showed. From the start it was evident that the game mattered more to them than to the Rockets, who sleepwalked for most of the first half. While San Antonio’s backcourt pressured the ball and attacked the rim, Houston’s superstar guards mostly floated around the perimeter early. Lonnie Walker IV, starting for a resting DeMar DeRozan, provided some physicality and energy at the wing while LaMarcus Aldridge steadied the half court offense whenever needed the Rockets tried to make a push. San Antonio came out focused for this one, and that was the difference.

Very quickly the Spurs took a double-digit lead in the first quarter and never looked back en route to a 128-114 win that seems closer than it was thanks to a stretch in the third quarter in which the Rockets actually tried and a garbage time run by Houston’s deep bench.

More important than the score was how well some players performed and how a small tweak impacted the rotation in a positive way. The Spurs went small, with Trey Lyles starting at power forward despite Jakob Poeltl being available. Lyles didn’t do anything impressive in his 20 minutes on the court, but his presence (and DeRozan’s absence) created more room for the guards to attack the paint and for Aldridge to own the block. As for Poeltl, he looked right at home in the second unit, screening and diving in a well-paced floor and providing a defensive presence for a bench that needs one. It’s unclear if Gregg Popovich went with that rotation just to match the Rockets’ but the team’s performance on Wednesday makes a good case for continuing to go with Aldridge at center going forward.

While going small helped, the biggest reason why the Spurs actually looked promising for the first time in preseason was the play of their young guards. It turns out that Derrick White didn’t forget how to play basketball, after all. White had 13 points, five rebounds and three assists and looked more engaged on defense. Dejounte Murray continued to show that the hype about his progress was warranted. Without DeRozan around Dejounte took on a bigger offensive role and delivered, logging 20 points on an array of drives, pull-ups and even a couple of three-pointers. Lonnie Walker IV, meanwhile, had a less impressive stat line but defended James Harden well while also providing help defense and showing his court vision by finishing the night with four assists. It was great too see all three do well on the same night.

It’s tempting to say the Spurs turned a corner in their preparation for the season with this win, but it might be premature to do so. After all, they faced a Rockets squad that looked uninterested and was so shorthanded at the center position that Ryan Anderson actually manned the spot for a few minutes. DeRozan and Rudy Gay were out for the Spurs, which means Pop will have to tweak the rotation yet again, too. The shooting was also unsustainable, so some regression will come.

We shouldn’t take too much away from any preseason games, but it’s still fine to get excited about how good the Spurs looked for stretches on Wednesday, especially after fretting over how bad they were for most of their past three showings. There’s still work to be done, but San Antonio seems to be heading in the right direction.

Next game: Vs. Grizzlies on Friday

Ja Morant vs. Dejounte Murray! A sneak peak at Jaren Jackson Jr. before his breakout season! A potential Kyle Anderson revenge game! Grayson Allen might instigate a preseason fight! It could actually be a fun game, against all odds.