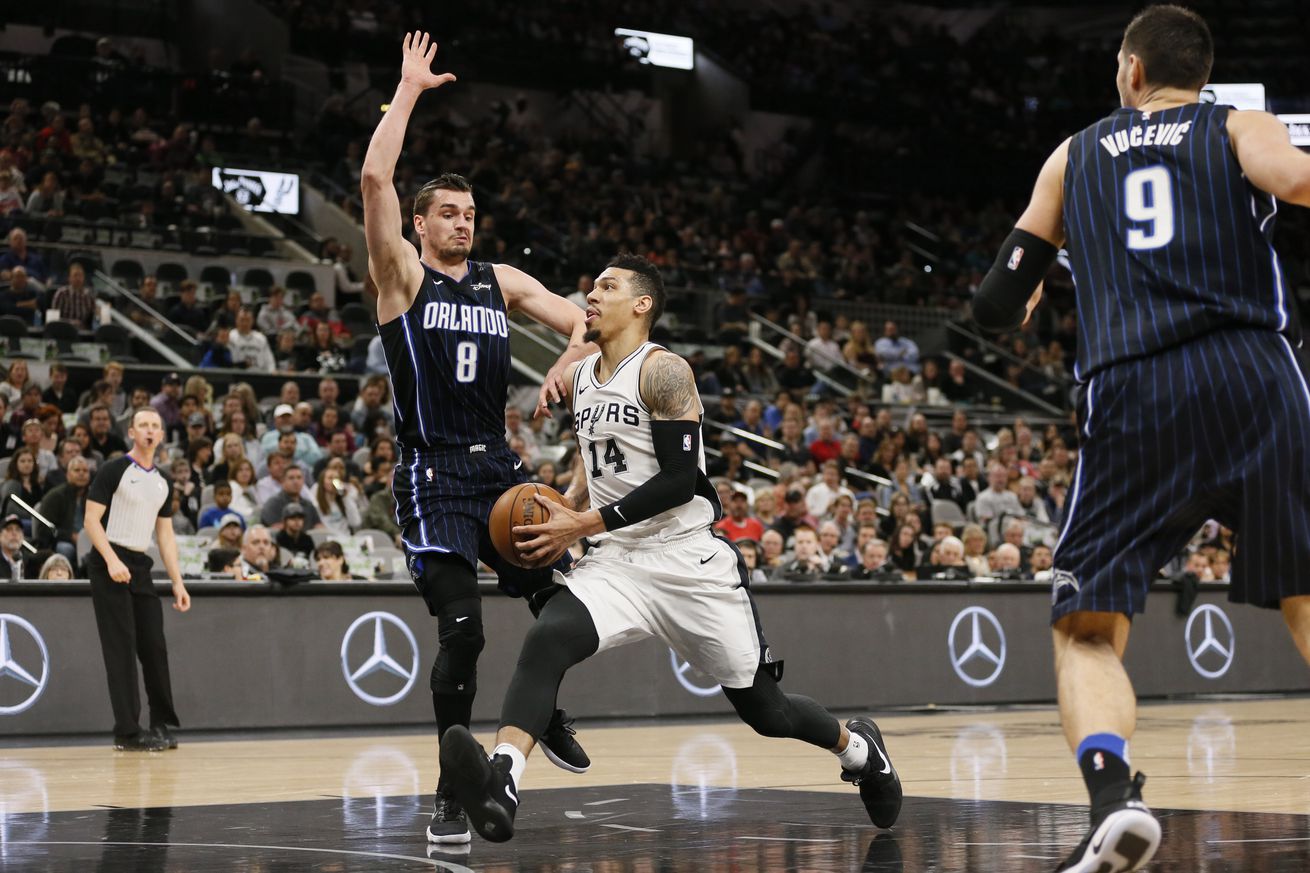 Fighting for their playoff lives, the Spurs took care of business against the overmatched Magic.

In a season that’s been relatively short on hope, the Spurs kicked off their six-game home-stand as strongly as anyone could’ve expected, blowing away the hapless Orlando Magic, 104-72.

They did so by executing on the only end of the floor that’s made sense this season, putting together a collective defensive effort that forced 20 turnovers and held their opponent to under 35% shooting. The 72 points Orlando scored was the lowest point total they’ve allowed in 2017-18, a complete reversal of the last time the teams met, when the Magic won, 114-87.

San Antonio is counting on another 180 coming of Tuesday night’s win. Here’s Patty Mills (13 points on 4-of-8 shooting) on what the game meant for the team coming in, as well as moving forward:

“I think was always a game in the back of our minds that, no matter how bad that road trip went, knowing that we’re back home here for a number of games now. We can lock in, concentrate, focus on these games coming up. This one was always on the calendar to be able to turn this ship around, and tonight was the night.”

Finding themselves in unfamiliar territory this time of year, the Spurs will look to hone their focus on the task at hand — even if the average fan’s attention is perpetually diverted by the playoff standings, or fixed on the man on the sidelines (dressed conspicuously in team warm-up gear, instead of his usual blazer and suit pants, and looking as animated as ever), or simply pining for the halcyon days of seasons past.

Are the players keeping track of the standings? “No” was the answer, speaking only for themselves, that was given by Mills, Dejounte Murray and Danny Green, although they still hear about where they currently sit through the grapevine.

“It’s hard not to hear it,” said Green. “But at the end of the day, we know what we’re capable of, what our potential is, and we want to be back in the conversation of one of those top teams.”

The defensive performance is what Gregg Popovich turned to immediately following the game, as he praised his starting backcourt of Mills and for setting the tone and being active with their hands on the ball.

“The rest of the team kind of followed through with weakside, boards, and kind of fueled the offense a little bit. I thought they did a good job.”

Before the game, Pop joked about the team’s uncharacteristically fluid situation with its starting five, which has seen 13 different players cycle in and out through 68 games. “We haven’t figured it out yet, but at least we know the people we’re choosing from,” he said with his typically slanted grin.

And indeed the Spurs surprised many — including themselves — with a new combination on Tuesday, making it 24 different starting lineups that Pop has trotted out this year. This time, it was Mills, Murray, Green, Kyle Anderson and LaMarcus Aldridge.

“I found out til before the tip [that I was starting],” said Green who, until the end of last month, had only come off the bench once since the 2013-14 season. Green got the nod over Pau Gasol, enabling San Antonio to go small and smother the Magic on the perimeter. He had 11 points and added a couple of his trademark chasedown blocks, both of which occurred in the first quarter.

The team benefited from the return of Aldridge, who sat out Sunday night’s loss in Houston with soreness in his right knee. The Spurs’ anchor on the left block had nine points in the opening quarter and 24 in the game, wreaking havoc in the pick and pop and in the post.

A healthy Aldridge, capable of creating offense out of the clunkiest of possessions, and a defense that’s still top-five provide the outlines of a scenario where the Spurs do as Mills hopes: right the ship and continue the franchise’s two-decade-long presence in the postseason. We’ll see soon how likely those hopes are.

Pop providing a few more details on the Kawhi situation

Emerging out of a particularly chummy back-and-forth with reporters — which delved into the familiar topics of former players (Jonathon Simmons), assistants (Chad Forcier), and wine (pinot, of course) — Pop kindly opted to shed another pinhole of light into the status of Leonard’s recovery. You can read the whole transcript here, courtesy of ESPN’s Michael Wright, but the TLDR version is:

A slip-up by Denver

Taking a page out of San Antonio’s book, the Nuggets surrendered a fourth-quarter lead to the plucky Lakers on Tuesday, ceding a bit of ground in the Western Conference standings and allowing the Spurs to inch into ninth (courtesy of a tie-breaker against Utah).

Introduced to a warm applause by the AT&T Center crowd, former Spur Jonathon Simmons had 10 points on 3-of-13 shooting. When asked about him before the game, Pop praised Simmons’ attitude, work ethic, and his ability to channel his drive to “destroy” his competitor into a constructive mindset, rather than ego.

At times, late-career Tony Parker is reminiscent of late-day Tim Duncan in how he operates. Reduced to just angles and craft, he can still get to almost anywhere on the floor, and he proved that again against Orlando. Parker had 10 points and a game-high eight assists, and you have to think that he’ll play an important role in whatever end-season run the Spurs have in them.

The unfettered joy of Dejounte Murray

Much of the fun in watching Murray in the open floor is simply that he’s free of everything that limits him in the half-court. His lack of a jumper; still-budding understanding of angles and openings; the need to defer to the All-Stars around him — they all go away when it’s just him and his moon-walk strides and one man to beat.

Dejounte Murray is cooler than your favorite player pic.twitter.com/GiWGKFKWjC

Gasol, who had an efficient 11 points on 3-of-6 shooting, has been sporting one of those compression undershirts since injuring his shoulder against Memphis, a potential sign that he’s still not 100%. Another sign: he’s taking just 6.3 shots per game in his last three contests, and making just 36.8% of them, while playing fewer minutes. Not ideal when your team is already short-handed in the frontcourt.