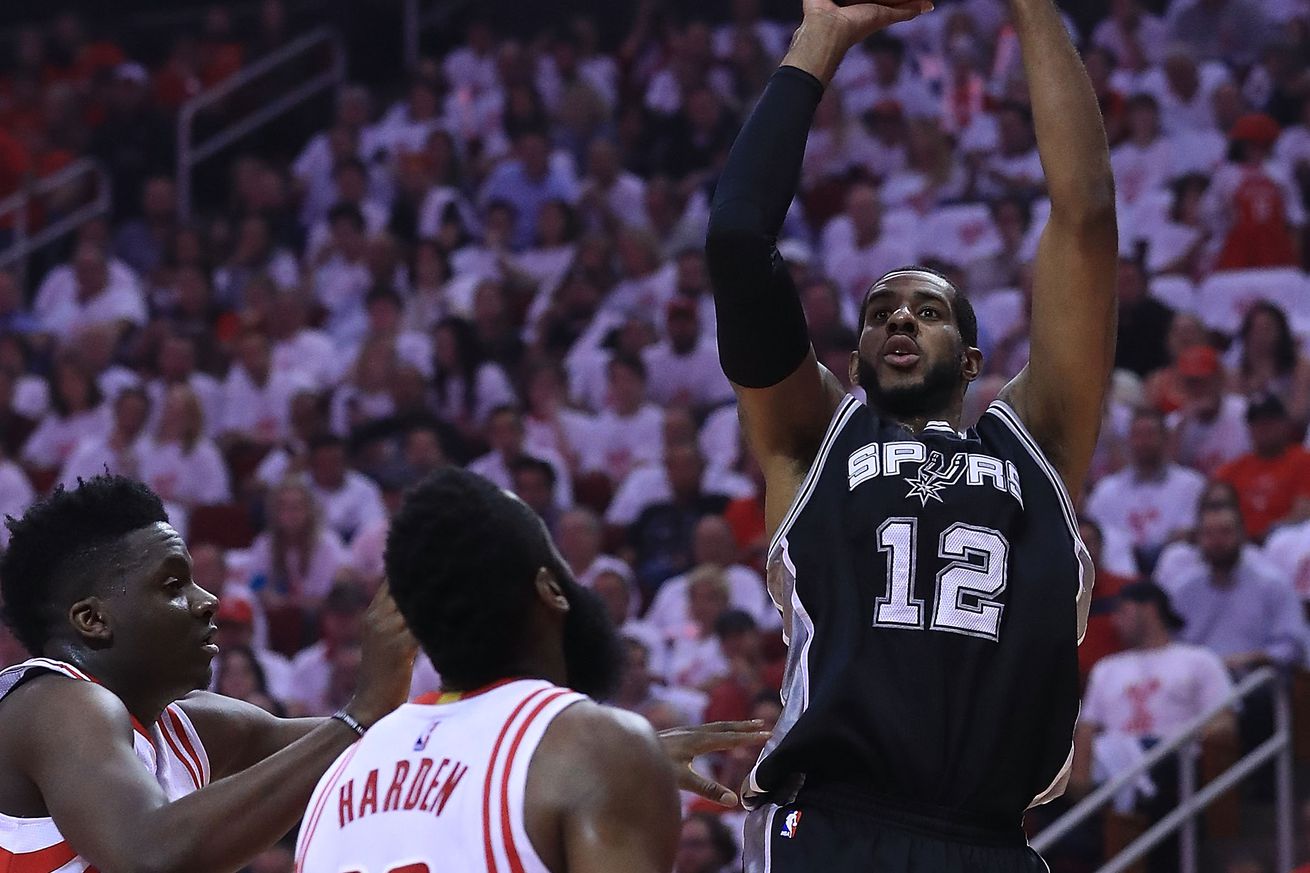 The Spurs overcame the loss of their starting point guard on the road in front of a rabid crowd against an MVP candidate having an incredible game.

The Spurs began a playoff game without Tony Parker for the first time in 16 years. Rookie Dejounte Murray started for the injured Frenchman, who is missing his first Spurs playoff game ever with a ruptured quad. Tony has played in every Spurs playoff game since May 27, 2001…which just seems bananas to see written. He has played in 221 playoff games in that stretch, not missing a single one, which is more than the Kings, Pelicans, Bucks, T-Pups, Knicks, and Hornets have combined (206).

The first quarter was very low scoring for these teams, ending with a 21-19 Rockets lead. Both teams were sloppy, with the Spurs shooting 35% and the Rockets shooting 25%. LaMarcus Aldridge led the Spurs with 6 points and 3 boards. In his post- 1st quarter interview, Pop called the Spurs’ offense “the worst offense I’ve ever seen in my life.”

Literally everyone struggled in the first half of this game. San Antonio missed 6 shots under the rim, consecutively, before the ball went out of bounds and then Kawhi Leonard was blocked out of bounds by Clint Capella. SA went small, which worked so well in game 2, but seemed like a desperation move to just get any offense going, with Pau Gasol, Kawhi, Jonathan Simmons, DJM, and Danny Green, early in the second.

DJM had a flash of brilliance with a steal off Harden and a layup for his first points of the game, but then gave up a steal to Beverly. Pau was the lone bright spot early in the first half, with 9 points. Harden picked up his third foul with 5:18 left in the second. Aldridge was the first Spur in double figures with his 10th point coming with 4 minutes left in the 2nd. The Spurs shot an abysmal 1-11 from 3 point land. The first half was fraught with turnovers (10 each at the half) and bad shooting, although not bad shots, with 40% for Spurs 29.5% for the Rockets. The half ended 43-39, with Aldridge leading the Spurs with 12, and Kawhi ‘s 10 being the only Spurs in double figures. Ariza had 15, all threes, and Harden had 13, along with his 3 fouls, to lead the Rockets. The Spurs led in points in the paint 26-8, and Houston’s 8-1 in 3s made is what made it close at the half.

Kawhi helped the Spurs to a 7-2 run to start the third with a layup and three, sandwiched by blocks by Danny Green and LMA for the Spurs’ 7thand 8th of the game. Kawhi had a stone-cold slam to extend his 7th straight point for the Spurs, and at this point both Kawhi and Harden led their teams with 17 a piece. After a ton of back and forth, Patty had a steal+3 to give the visitors a 6 point lead…Simmons dive and slam gave the Spurs their biggest lead of the night at 11, but then Beverly completed a 3 point play, and Eric Gordon hit 2 FTs to bring the lead back down to 6. Gordon had another layup to bring the Spurs’ lead down to 3, but the J-Simms had a long 3 to extend the lead back to 6 at the end of the third 72-66. Leonard led the Spurs with 19, and Harden led the Rockets, and all scorers, with 27. The Spurs were 5-6 from 3 in the third, but had 6 more turnovers in the quarter, which helped keep the game close.

The Spurs won 103-92 to take a 2-1 lead in the Western Conference Semifinals series. Aldridge and Kawhi both had 26 for the Spurs, while Harden ended with 43 on the night. Hopefully whatever made Pop’s hair go bananas will carry on into Game 4, and even through the Finals.

Game 4 is Sunday at 8pm in Houston.