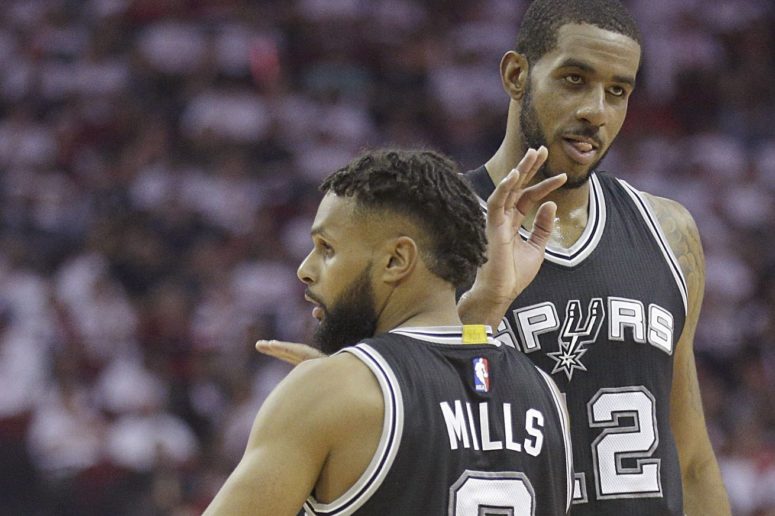 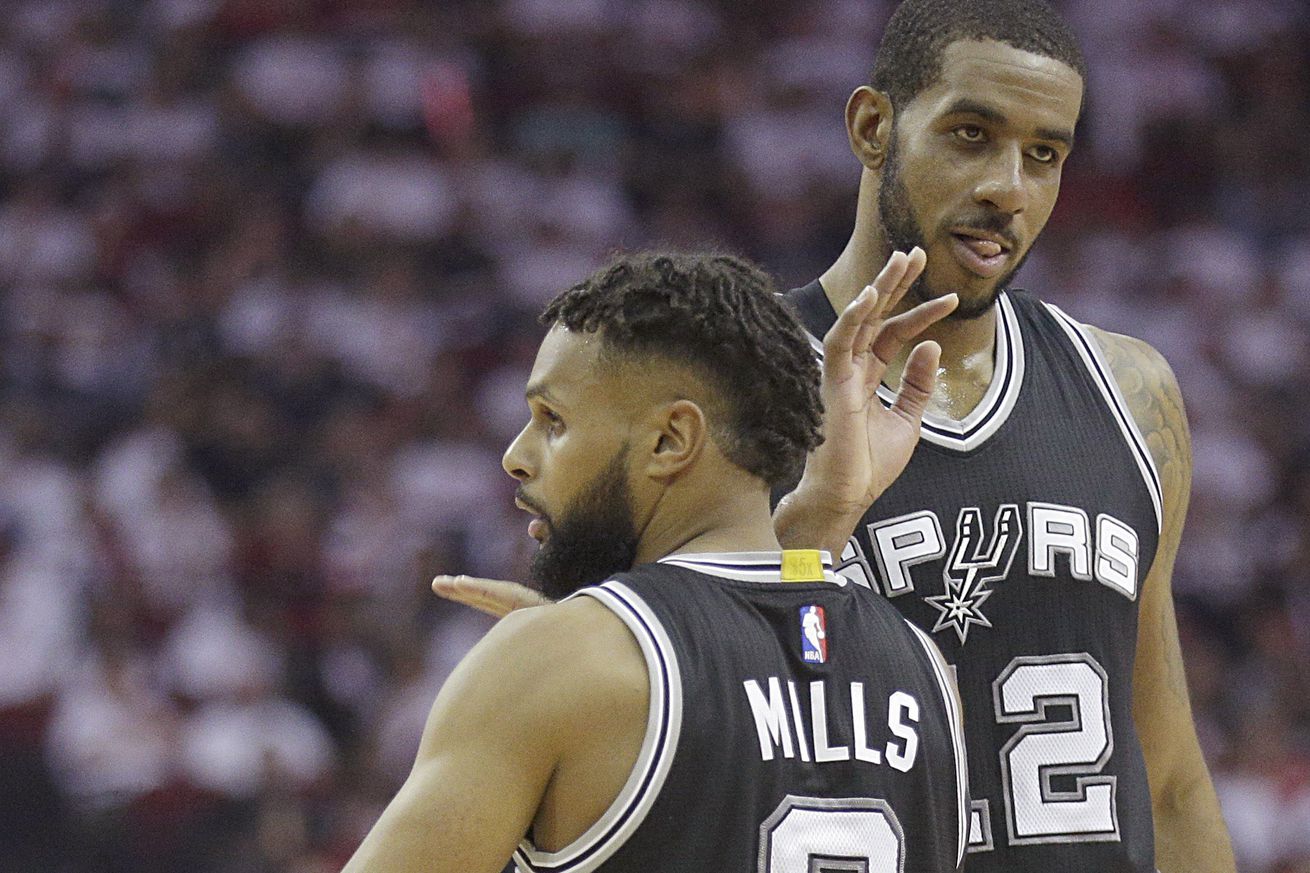 For the first time in… ever, the Spurs have a series lead against the Rockets

You know, it kind of got lost amid the carnage of Game 1, when the Rockets scored approximately 12 googleplex points on 4 googleplex three-pointers, but the Spurs actually did a pretty solid job of holding them down during the regular season. Houston scored 101, 100 and 100 points in the first three games, before getting loose a little bit for 110 in the final regular season meeting at San Antonio, and the Spurs just happened to score 112 in that one, with Kawhi Leonard going all Kawhi Leonard over the place and whatnot.

Houston finished second in offensive rating during the regular season, scoring 111.8 points-per-100 possessions, per NBA.com’s Stats Index. However the Spurs held them to a mere 103.5 offensive rating during the four games, a figure that would’ve finished just ahead of the 24th-ranked Los Angeles Lakers. They also exposed a couple more chinks in the Rockets already pliable defense as well. Houston ranked 18th in defensive rating, allowing 106.4 points-per-100 possessions, but that number swelled to 107.5 against the Spurs, which would’ve placed them just above the 21st-ranked Portland Trail Blazers.

So yeah, Game 1 aside the Spurs have done a better job of making the Rockets bending to their pace and will than the other way around and we saw further evidence of it in Friday’s Game 3 at the Toyota Center where despite their own fits and starts on offense, the Spurs never allowed the Rockets to find any kind of sustained rhythm, never let the home side get further than a couple possessions away from them (and even then, never after the second quarter, taking the lead for good on a Leonard layup 34 seconds before recess) and most importantly never let more than one Rocket get hot at the same time. First it was Trevor Ariza, then in the second half it was James Harden and when it wasn’t them it was nobody.

If you know Gregg Popovich at all then you know down to every bone in your body that this was, by far, his favorite game of the series so far, despite it being the first playoff game he’s coached in 15 years without Tony Parker in the lineup. Whereas the first two skirmishes saw one side playing like the Warriors and the other like Washington Generals, this actually felt like a classic Spurs playoff game in all its ugly, grimy, pounding-the-rock-competitive-fiber-I-want-some-nasty goodness. Plus, it came on the road. Pop loves winning on the road.

It was no masterpiece, to be sure. In fact Popovich summed up his team’s attack through 12 minutes as “the worst offense in basketball history,” and he wasn’t too far off. Dejounte Murray, the first rookie to start a playoff game for the Spurs since the man he replaced (h/t Jeff McDonald) looked a spazzy mess with two early turnovers that could’ve easily been four. Then Leonard and LaMarcus Aldridge took turns diving into frigid waters of Lake Iso-ball. Fortunately Aldridge and Pau Gasol each hit a pair of jumpers but for the most part the Spurs looked every bit the part a team that could managed just 19 points in a quarter. Even more fortunately, the Rockets only scored 21 themselves.

The game tilted in the visitors’ favor in the second quarter. They were a bit more fluid offensively, with the bench contributing some assists if nothing else, Leonard finding lanes to the rim and Murray looking less jittery in his second shift. The Spurs made almost half of their shots, even though none of them were threes. Where they really made hay though was on defense. It’s the third game of the series now and one got the distinct impression that the fellas either through coaching or osmosis have started to notice some of Houston’s patterns and tendencies. Whatever the reason, the rotations were sharper, the closeouts were faster, there was far better communication in transition and none of the Rockets’ role players except for Ariza got so much as a clean look. Remarkably, not only had Houston made more threes (8) than twos (5), but they were 5-of-21 inside the semi-circle, with the Spurs forcing them into an uncharacteristically high number of floaters.

The Spurs had the opposite problem. They were only 1-of-11 from deep and had but two attempts from the charity stripe, but they were fine from two (19-of-39) when they weren’t passing the ball to the other team or bumbling it out-of-bounds. Still, they led 43-39 at half and the score seemed to flatter the Rockets.

After an ice-cold six quarters Harden finally warmed up in the third, cashing in on some drives and hitting a pair of triples. He made 5-of-7 shots and scored 14 in the quarter. But the rest of his teammates connected on five buckets between them, and none from downtown. On the other end Leonard was back in God Mode, making 4-of-5, and at last he got help from the bench with Patty Mills and Jonathon Simmons combining for 11. The former gave the Rockets a taste of their own medicine with a three-shot foul and the latter had another thrilling slam plus a running three at the buzzer, throwing a blanket on what had been a burgeoning Rockets comeback. The Spurs stretched the lead to six, 72-66.

As was the case in Game 2, the Rockets cracked mentally in the fourth quarter. Harden and Patrick Beverley both picked up technicals. Mike D’Antoni, harking back to his “Seven Seconds or Less” days, played just six guys in the period, running Harden, Ariza, Clint Capela and the anonymous Eric Gordon the full 12. Again Harden sank five buckets, but his supporting cast accounted for four. Were the Spurs playing Houston on Friday or Oklahoma City?

For a big chunk of the fourth quarter Aldridge was outscoring the Rockets by himself. He finished with 26 on 12-of-20 shooting with four blocks, and while it was obviously his best game of the series what stood out to me was the how rather than the how many. Unlike the past games Aldridge was quick and decisive in his moves over the final three quarters, forceful in establishing deep post position, scoring on runners, up-and-unders and on baseline cuts after Leonard drew the help. Historically Aldridge has been a fast starter, to the point where if he doesn’t go off in the first quarter it’s tough for him to ever get going, but that wasn’t really the case here. Instead he was like a workhorse running back, wearing down the defense and getting stronger as the game went on.

Danny Green put the game away with a pair of threes, one in transition and one off a designed play out of a time out, Leonard finally got to the line some and the Spurs had the fans heading to the exits with three minutes remaining. (They still haven’t lost in this building this season, you know.)

I wonder how much fatigue played into this game. It was the third in five nights, which is normal for the regular season but a bit compacted for the postseason especially in contrast to the way the league stretches out the first-round games. The Rockets didn’t seem to have their legs on the long-ball or those floaters, missing most of them short and they weren’t as lively in transition either.

It was all too reminiscent of the Spurs’ blueprint to slow down D’Antoni’s Suns and something I called for before the series. Let Harden get his, stay on the shooters, take away everybody else. Heck, at least A’mare Stoudemire could stick a mid-range jumper and was a ferocious roller to the rim. Houston’s bigs can’t even do that — though to their credit they are better defenders than “STAT” ever was. All I know is that it’s going to be very difficult for the Rockets to beat San Antonio when Leonard finishes with more assists than Harden.

Speaking of which, we saw a few minutes of Kawhi running point in the fourth quarter, with nary Mills, Murray or even a Manu on the floor. He did fine.

Expect more of it in the games to come.

Then again, don’t expect anything. Who the hell knows? I’m the same guy who wrote a paean to the Spurs’ small-ball attack after Game 2 and Pop used it for just 10:07 in Game 3, with San Antonio getting outscored by a point in that time. What I’m saying is, in the immortal words of Winston Wolf, let’s not pat each other on the back just yet. The Spurs are up 2-1 in the series, which is good, and mathematically the best possible scenario after losing Game 1, but they were also up 2-1 in 2012 to Oklahoma City, in 2013 to Miami, in 2015 to the L.A. Clippers and last year to the Thunder again.

All I’m certain of is that at the minimum the Spurs will have won as many playoff games this season as they did in either of the past two, despite no longer enjoying the services of the best player in franchise history. That’s a helluva accomplishment, in and of itself.