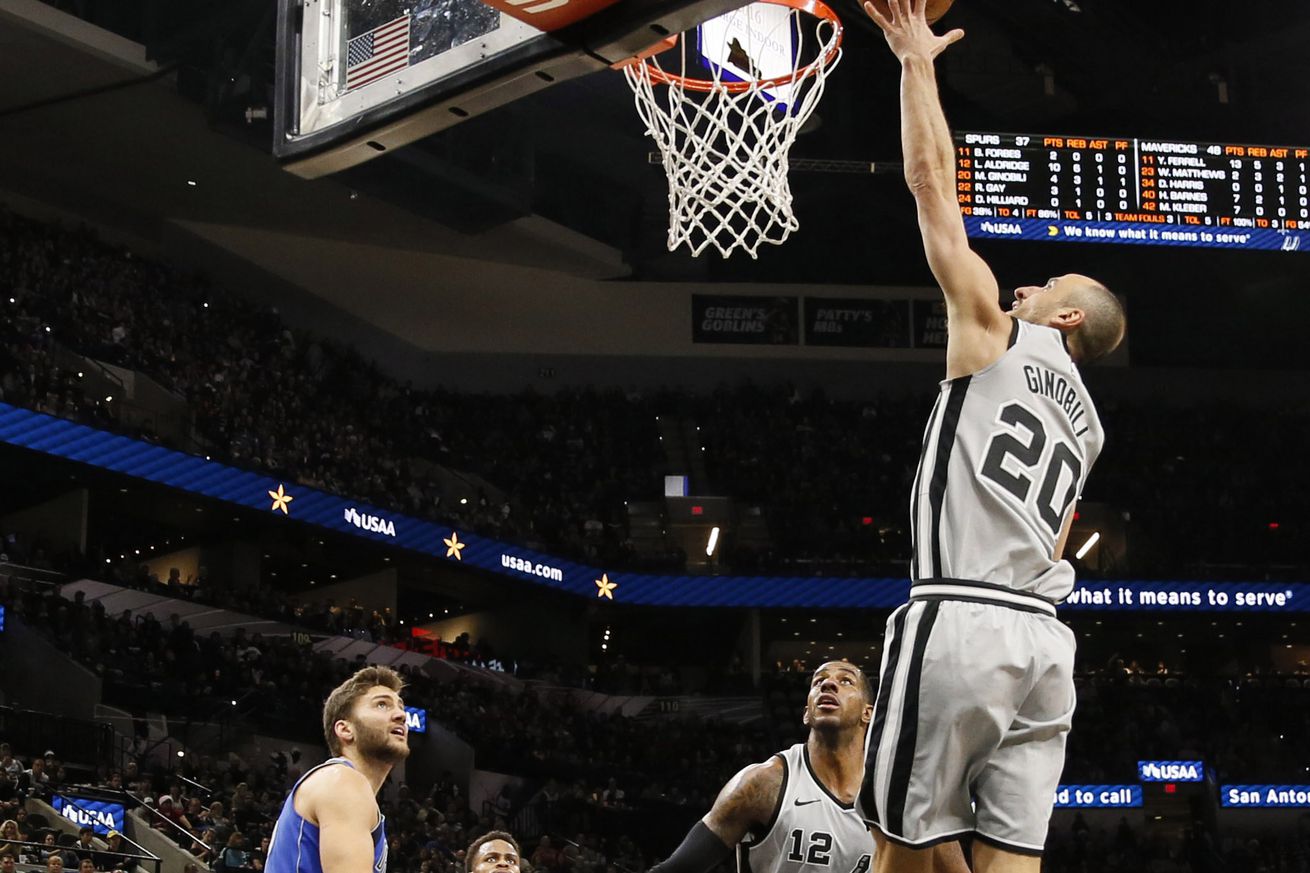 A 13-0 run over the last four minutes earns the good guys a win.

The Spurs played their final meeting with I-35 rival Dallas Mavericks tonight. All four meetings took place in just over a month. The Spurs took the first game at home. Game two featured Tony Parker’s season debut and the Spurs took that one in Dallas. The Mavericks took the third, squelching the return of Kawhi Leonard. Tonight’s match did not feature Parker or Kawhi Leonard. Danny Green stayed out with the current groin strain obtained in last week’s Celtic’s match. And Kyle Anderson sat again since spraining his MCL in OKC. Tonight’s finale promised the energy of young bench play and…

With three starters out, the Spurs started Dejounte Murray, Bryn Forbes, and Rudy Gay alongside LaMarcus Aldridge and Pau Gasol.

The Spurs started cold missing their first five shots but quickly corrected getting everyone involved and going 4 of the next 5 before the first break in play. After the break, the Mavericks went on a 12-0 run until Patty Mills hit his first 3. Another basket by Patty and one by Manu Ginobili would end the quarter and leave the Spurs down by 13. Dallas’ point guards Yogi Ferrell and J.J. Barea combined for 13 once again having their way offensively with the Spurs. Dallas overall shot 62% compared to the Spurs 30%.

Spurs were looking rusty until Davis Bertans completed a four-point-play. After another defensive stop, Dejounte Murray took one all the way to the hoop and the Spurs momentum started to pick up again until the tandem of Ferrell and Barea scored 6 straight pushing Pop to take a time out. The Spurs shooting and defensive woes continued as the Mavs stayed an average of 13 points ahead throughout the quarter. The Spurs improved their percentage to 38% by the half but still trailed by ten when heading into the locker room. Stat to notice- the Spurs had only 5 assists in the first half. That should be telling as to how well they were playing together.

The Spurs came out in the second half fighting the same demons that plagued them during the first half. Bad passing, turnovers, and an inability to put stops on the defensive end helped maintain the Maverick’s lead. The Spurs showed a flurry at the halfway point and closed to within 4 before Dirk Nowitzki shot 3 for 3 over Patty Mills on identical plays. Spurs down by 9.

No matter how hard they tried, the Spurs could not close the gap. Dejounte Murray and Rudy Gay both had foul trouble and no one was offering consistent shooting. Pau didn’t even make an appearance in the final frame and scored no points for the second time in a row against Dallas. One rebound and one assist isn’t going to get it done.

Alas, a 9-0 run left the Spurs down with 53 seconds left. A turnaround jump shot by LMA tied the game with :23.4. A foiled in-bound pass by Manu Ginobili gave the Silver & Black the ball back with :23.1. Manu brought up the ball, created the “Manuver” and won the game…AGAIN!

Dallas had a rough start to their season, but their last two games against the Spurs have shown an evolution. Given enough time, they may have made waves in the Western Conference. Meanwhile, the Spurs are in a funk. Reintegrating key players, managing minutes, and augmenting lineups will challenge any team, but the Spurs are showing some mid-season wear-and-tear that needs to be dealt with immediately.

The Spurs led for 3 seconds. That said, they were the most important 3 seconds and an ugly win is still a win…we’ll take it!