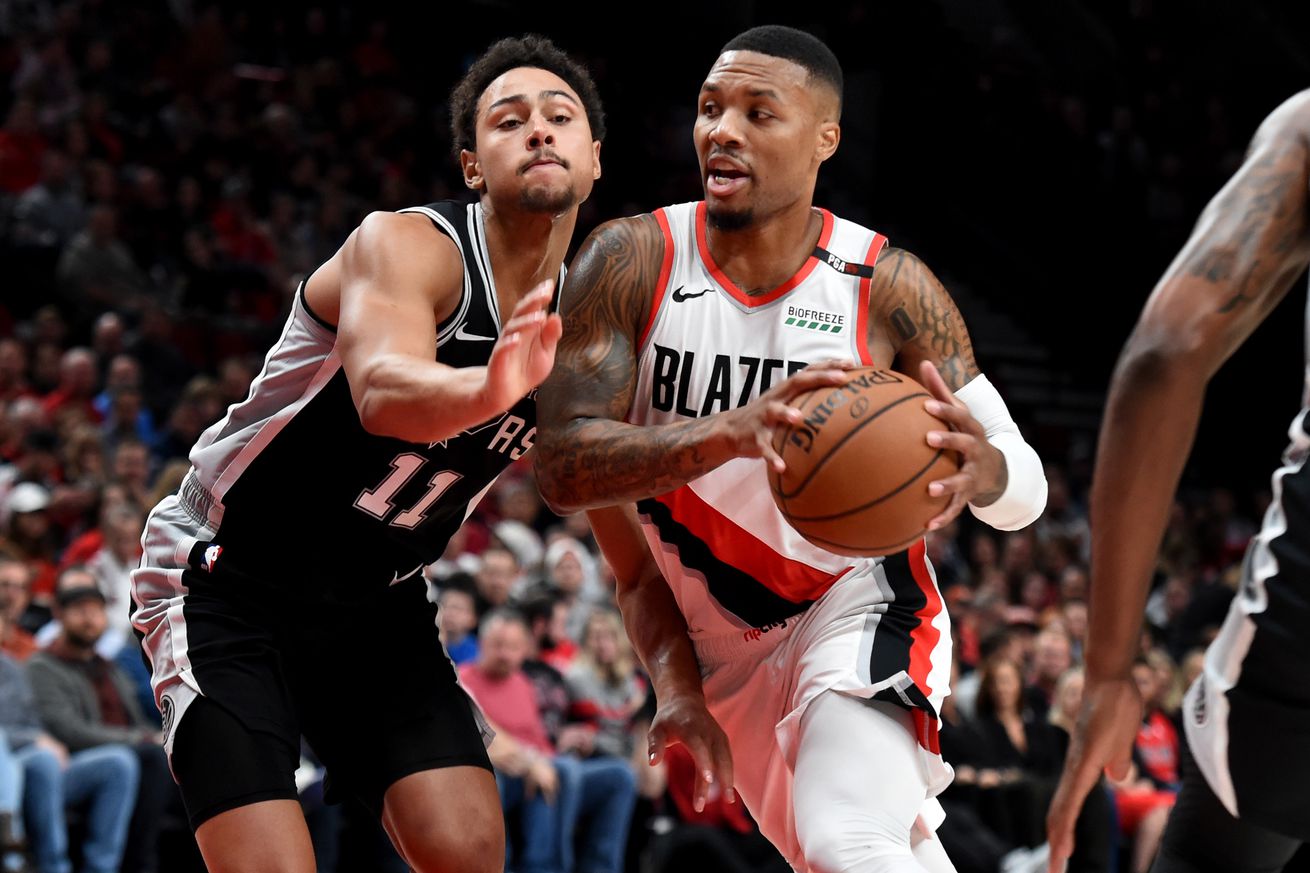 The Spurs couldn’t stop Damian Lillard and C.J. McCollum as Portland cruised past the Spurs in their first road game of the year.

Damian Lillard and CJ McCollum were too much for the short-handed Spurs as the Silver and Black dropped their first road game of the year against the talented Portland Trail Blazers. Although DeMar DeRozan and Bryn Forbes contributed solid efforts on their end of the floor, nobody wearing a Spurs jersey had any luck stopping the Blazers’ elite guard tandem, as they cruised to an easy win in the second half.

Damian Lillard opened the scoring with a deep three-point shot as the shot clock was running out on the first possession. LaMarcus Aldridge and Bryn Forbes scored the first points for the Silver and Black as the Blazers rushed out to a 7-5 lead. Both teams had trouble scoring, as Rudy Gay missed a thunderous dunk, but the teams were tied at 9 each halfway through the first quarter. Neither team could get untracked on offense, as Portland led 19-16 with two minutes left in the quarter after Marco Belinelli forced a Portland turnover(!) The first quarter ended up tied at 22-22, with Davis Bertans and Seth Curry trading deep baskets late. By the standards of this year’s NBA, this was a defensive struggle.

Moe Harkless opened the second with a triple for the Blazers, and Nik Stauskas hit another deep shot with a Spurs defender in his face to stake Portland to a six point lead. But the Spurs went on a seven point run to regain the lead capped by a Forbes triple. The teams traded baskets, but a costly turnover on the inbounds from Bertans gave the Blazers an extra two. The Spurs got extra shots from offensive rebounds, but they couldn’t hit enough shots as Portland led 39-35 halfway though the second quarter. They extended the lead to nine with a shot from Al-Farouq Aminu, and Patty Mills’ marksmanship from deep and DeRozan’s wizardry in the paint kept the Spurs from losing touch. The Blazers ended up scoring 37 points in the second quarter to lead 59-50 at the half.

Forbes started off the second half with two three point shots as the Spurs cut the lead to five, briefly, but the Blazers came back, extending their lead to double digits on a deep Lillard shot with 9 minutes left in the third. CJ McCollum did his part for Rip City both shooting and making slick assists, as their lead ballooned to 14, leading 89-75 with 3:27 left in the third. Patty Mills hit some shots, but so did Seth Curry and the Blazers, and they led 97-82 after three. The Spurs defense was even worse than the second quarter, giving up 38 in the third.

The Blazers stretched their lead to 20 with baskets from Curry and Evan Turner and it was starting to look like a blowout for the home team. But the Spurs weren’t done yet, as they fought back with DeMar DeRozan’s midrange game as the hot shooting from the Blazers finally began to cool a bit. The Spurs methodically cut into the lead, trailing by 11 after a DeRozan jumper in the paint with 6:48 left. But that was as close as they could get, and both teams emptied their benches late, giving Spurs fans their first opportunity to see Chimezie Metu, who played well in garbage time.

The Spurs are staying on the west coast for a game against the Los Angeles LeBrons on Monday night at 9:30 PM CT, televised on NBATV and FSSW. The Lakers should be interesting this year, their roster is an amalgam of mismatched old veterans and raw youngsters. Any team with LeBron James should be tough, but they probably won’t gel until later in the season, if at all, so it will be a great chance for the Spurs to pick up road win.