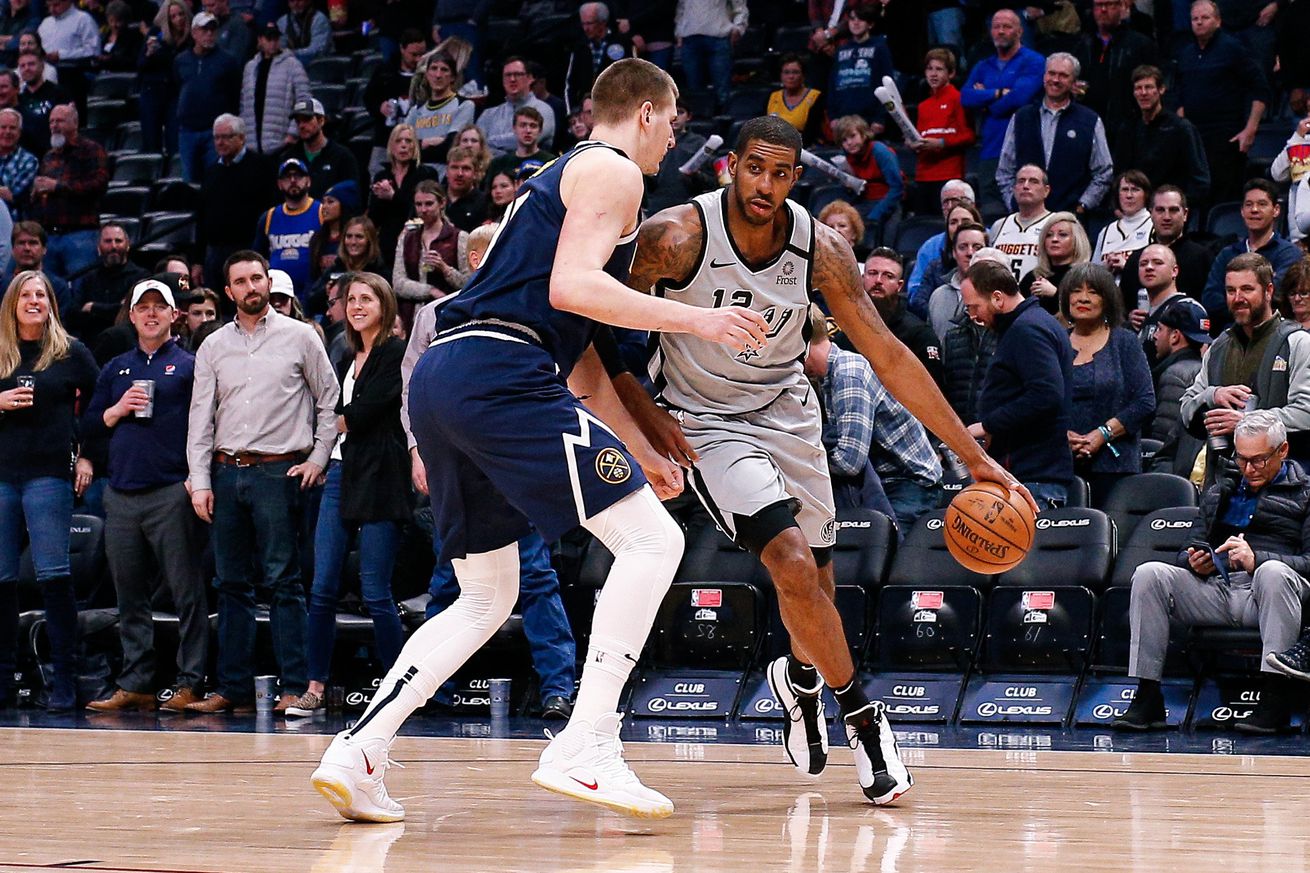 The Spurs snatch defeat from the jaws of victory as the Nuggets steal a win that was all but in the bag.

Stop me if you’ve heard this before. The Spurs played well for much of the game, built a sizable but lost their composure late in the third quarter, and let a team that they had dominated for much of the contest back into the game. Paul Millsap, like he always seems to do against San Antonio, muscled his way to baskets in the paint and hit key triples. The Spurs showed a little resilience early in the fourth quarter by regaining the lead, but the Nuggets were too tough, as Jamal Murray took over late and led them to a win.

The Spurs started out with decent defense, and scored their first points on three free throws from LaMarcus Aldridge, who got fouled by Jamal Murray. The Spurs were hot early as they rushed to a 19-8 lead with LaMarcus leading the way with 11. The Spurs continued their hot shooting and led 40-30 at the end of the first quarter. While the Spurs dominated the first quarter, the Nuggets kept it from turning into a blowout by hitting shots and making smart plays on defense.

Mills opened the second quarter with a triple behind a screen from Jakob Poeltl, and the Spurs used opportunistic defense to pull out to an early 15 point lead with Rudy Gay doing a lot of the damage. The Spurs have had trouble defending three-point shots this year, and tonight was not different, as the Nuggets hit triple after triple to fight their way back into the game with a 7-0 run. The joy of the home team was short-lived as the Spurs turned up the defense and went on a 9-0 run of their own. The last few minutes, the referees decided to suddenly start calling everything, mostly in favor of the home team, and the Nuggets took advantage, junking up the game to keep it in reach. Nevertheless, the Spurs led 67-53 at the half.

LaMarcus started the third quarter with a mid-range jumper as the Spurs extended the lead to 19 with a Forbes triple a couple of minutes in. The game got pretty loose as both teams were playing a little sloppy, while the Spurs ran out to a 23 point lead. Paul Millsap used his toughness and footwork to get scoring opportunities as the Nuggets cut the lead back to 93-89 on a 26-7 run, to ruin the great work the Silver and Black had put together for the first two and a half quarters.

Millsap and Murray hit triples to start the fourth, with a Jakob Poeltl bucket in between, and the game was back even again at 95 points each. The teams swapped punches for a few moments, but Millsap got a wide-open three point look and gave the Nuggets their first lead of the night at 102-99 with a triple. That’s when something weird happened. The Spurs bounced back with an 8-0 run to retake the lead. Jamal Murray, who hadn’t done much in the first three quarters, began to take over as they retook the lead with 4:50 to go. The Spurs looked a little gassed, and the Nuggets were able to get rebounds and a uncontested triple from Torrey Craig with 3 minutes left gave them a 7 point lead. They eventually went on a 15-0 run to put the game out of reach, although the Spurs made it a little more respectable at the end by playing a little defense, but the lost 127-120.

I am so tired, how long can this go on …

The Spurs play tomorrow night at 7:00 PM in Oklahoma City, facing Chris Paul and the always tough Thunder. Can the Spurs pull out a win? The only way to find out is to watch the game. Or look at the box score later, but that’s no fun. See you in the game thread.