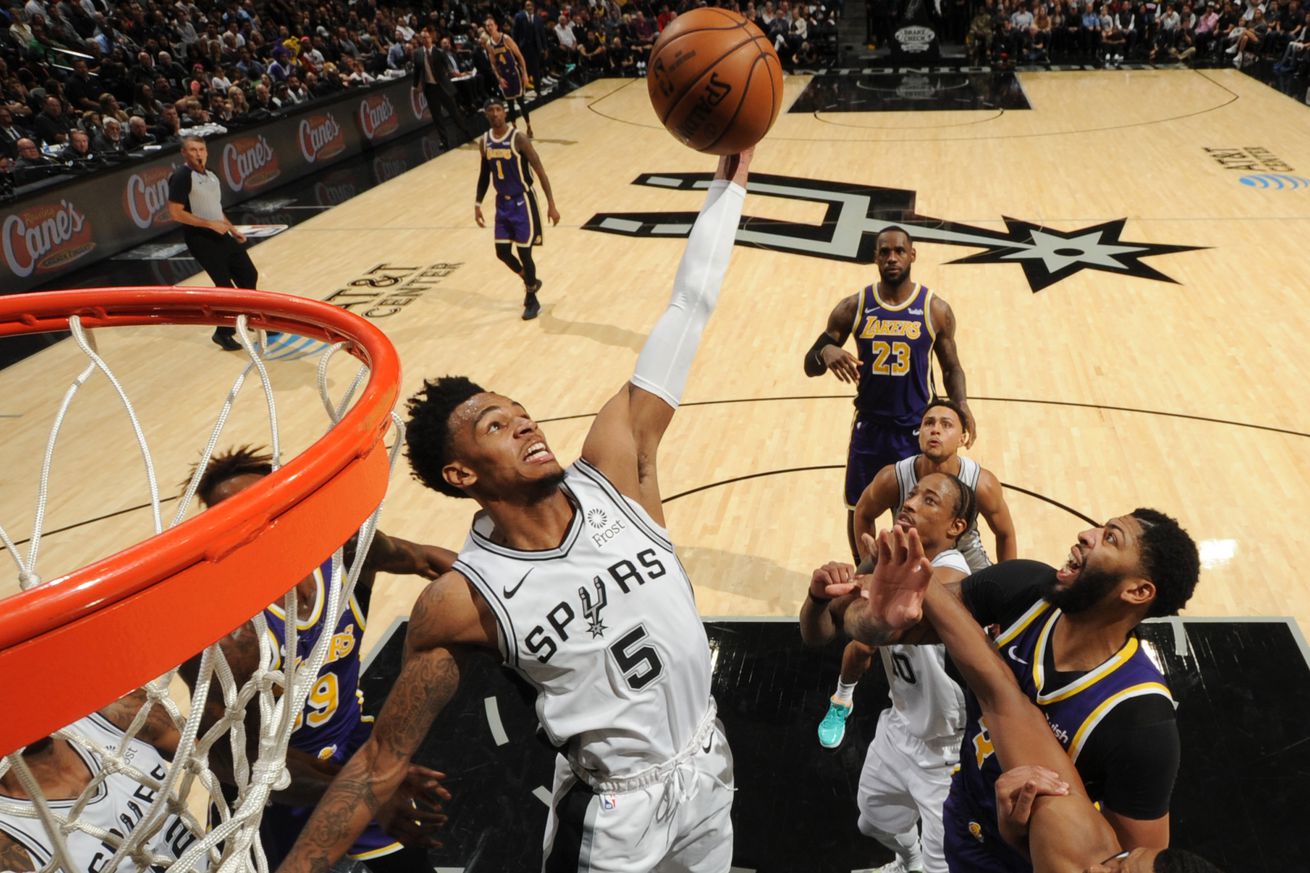 At this point in the season, anywhere you can pick up insight could help develop a team into a contender.

After playing three home games, the San Antonio Spurs hit the road for a SEGABABA and split it. But it seems like Los Angeles just might not be angels for the guys in Silver and Black. A loss to the Clippers in LA and a loss to the Lakers in our house make up the only two losses so far this season. Both the wins and the losses offer some great highlights and some miscues. So the guys learn from this week and move on.

Week 2: In this first full week of games, the Spurs faced only Western Conference rivals. Against Damian Lillard and the Portland Trail Blazers, the team needed a lucky swirl of a basketball to get out with a win, but Derrick White came alive for 21 points and we got both Derrick and Dejounte Murray on the court together for end of game defense. Then the Silver and Black headed to the coast for a back-to-back against one of the reining favorites and a previous world champion. On Thursday night, the Spurs faced Kawhi Leonard and the Los Angeles Clippers. While our guys lost the game, they stayed competitive throughout. White continued his scoring streak and DeMar DeRozan earned 29 points for his hometown crowd. After heading up to San Francisco, everyone hoped the Spurs wouldn’t have a let down game after the Golden State Warriors were dealt another devastating injury. Murray sat out this game due to load management, but Patty Mills picked up the load, scoring 31 points in a blow out of the former champions. The Spurs then returned home to face the Los Angeles Lakers, both teams at 4-1 – tied for 1st in the Western Conference. An amazing performance by Murray against his mentor LeBron James wasn’t enough to survive a poor shooting night (7-24) from the two Spurs All-Stars. After taking a hard foul and fall, thank God Derrick was basically all right.

The Spurs rank second in the NBA in offensive efficiency (112.4 points per 100 possessions) despite ranking second to last in 3-pointers made (8.3 per game) and attempted (25.3). Another statistical oddity: San Antonio ranks second in rebounding percentage (53.7) despite the fact that a skinny point guard on a minutes restriction is leading the Spurs in rebounding, with Dejounte Murray grabbing 8.6 boards in only 23.3 minutes per game. — MacMahon

Dejounte Murray’s minutes restriction must be maddening for Gregg Popovich. Murray is averaging 13 points in just 23 minutes per game, and he leads San Antonio in assists and steals. San Antonio has found its next building block. His health is of chief concern as we approach 2020.

After a win over the Blazers last Monday, the Spurs lost their first two games of the season to the L.A. teams, with a win over the ragtag Warriors in between. The defense has been marginally better and Dejounte Murray has looked incredible, so there’s reason to be optimistic in San Antonio.

The jury is still out on whether this version of the Spurs’ offense – with Dejounte Murray getting them more of the best shots on the floor (those at the rim) – can remain in the top 10. They’ve had three efficient games against teams – New York, Washington and Golden State – that currently rank 22nd, 27th and 30th defensively, and they were held under a point per possession by both the Clippers and Lakers last week. Defensively, only 32% (the league’s lowest rate) of their opponents’ shots have come from 3-point range, though five of their six opponents currently rank in the bottom 12 in that regard. And down the stretch of their loss to the Clippers, they were forced to send a double-team at Kawhi Leonard, lacking a lengthy wing to guard him one-on-one. The offense should be tested more over the next two weeks, with four of their next six opponents (including the Thunder and Celtics) currently in the top 10 defensively.

The Spurs are undefeated against the non-Los Angeles portion of the NBA so far, with their only two defeats coming Thursday to the Clippers and Sunday against the Lakers.

As was the case last year, the Spurs are generating plenty of points with a shot profile that has fallen out of favor across the league. They rank seventh in scoring efficiency despite owning the second-lowest three-point-attempt rate in the NBA.

Now that we are 1 full week in and 6 games down, how are we feeling about the Silver and Black? Do you agree with the sports analysts? Are they getting it right or wrong? Tell us what you think in the comments.