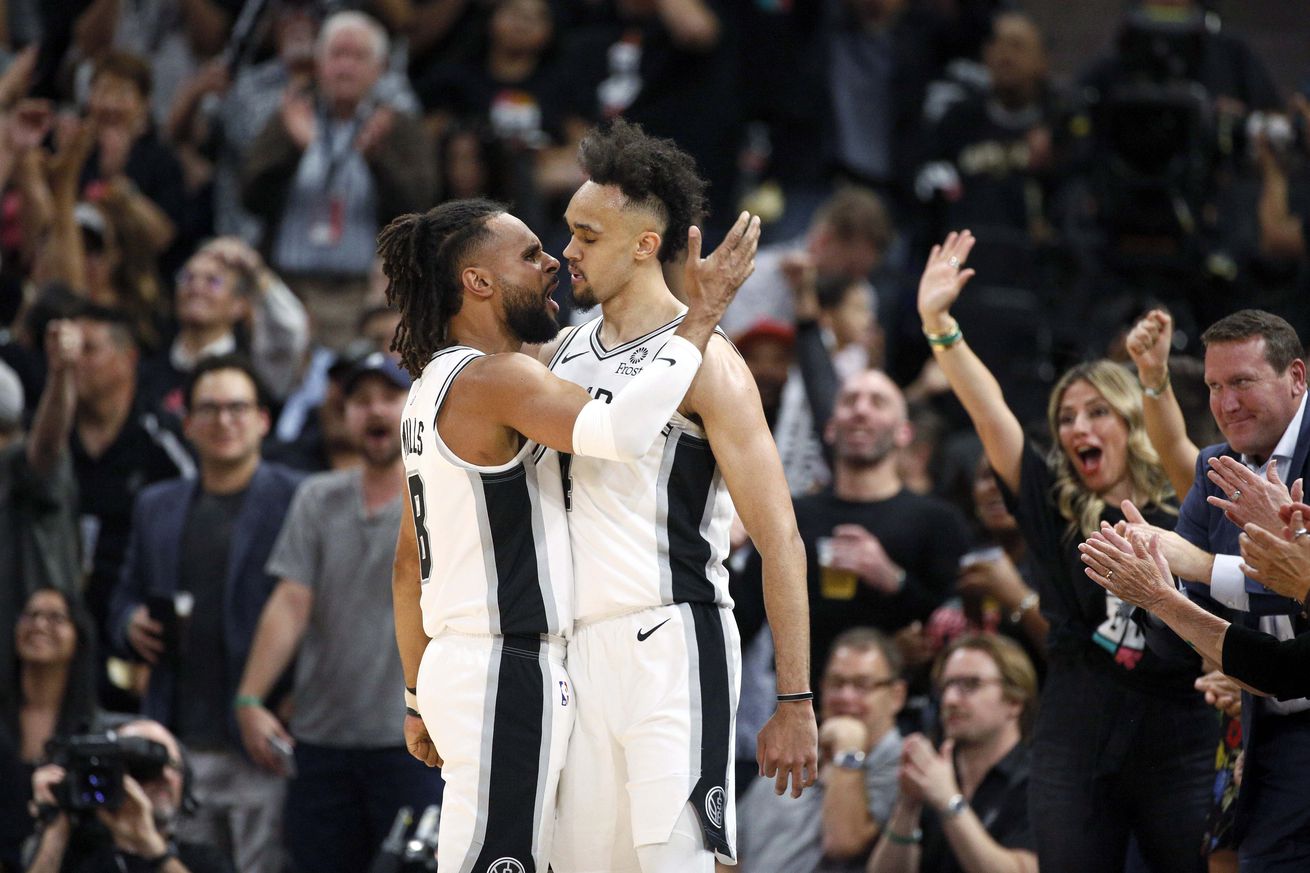 Mills was calm when others were heated and fiery when a spark was needed.

A single play can tell us a lot about a player. In this new series we’ll take a look at the best or most meaningful moments from every Spur, hoping they can provide some insight into what makes them who they are. This time, Patty Mills.

Time was running out in the first half of the Spurs’ January 7 visit to the Pistons. San Antonio had won four in a row heading into Detroit and was closing a strong second quarter in which they scored 34 points to turn a 12-point deficit into an eight point-lead. Yet there was a strangely tense moment as the buzzer sounded which threatened to kill the good vibes.

As far as I can tell, Gregg Popovich wanted Derrick White to use the foul the Spurs had to give before Blake Griffin could take a shot. White ignored him but forced a miss, so he started to make his case, essentially talking back to a coach who is used to having the last word. Neither side seemed angry, but they clearly vehemently disagree about something. It could have escalated into something more.

Fortunately Patty Mills was there.

You can see Mills lingering when he hears the discussion and immediately trying to defuse it by pulling White away. When it continues anyway, he really intervenes, essentially getting between the two. White relents and moves on, ceding to the advise of his veteran leader, which is nice. But Pop’s reaction is what really makes this moment special: he not only allows Patty to meddle but offers a satisfied smile and an approving pat in the butt in response to whatever Mills said. He seems proud, which is understandable.

Mills has come a long way, from being known for his bench celebrations to becoming an essential second unit player. Pop touted him as a leader in the rocky 2018 season, but this year he truly became the torchbearer for the culture Pop built. As the longest tenured Spur, Mills took over Manu Ginobili’s role as the guy who kept the group together and served as a bridge between the young players and the coaching staff. Part of it came naturally. He organized outings on the road and set up a huddle for the bench during player intros, tasks that seem tailor-made for the typically gregarious Mills. Stepping between an up-and-coming young player and Pop and commanding enough respect from both parties is a different story. At age 30 and after years as a rotation mainstay, Mills was ready for the more serious aspects of leadership.

Because of it, Mills would still have value even if he were just a veteran at the end of the bench like Quincy Pondexter. But he absolutely isn’t. Patty has a contingent of fans who have turned on him, mostly because of his contract, who might acknowledge his positive influence in the locker room but tend to ignore his solid production. He was durable and a good scorer during the regular season before struggling with his shot in the playoffs, but he still maintained close to a 3:1 assist to turnover ratio in the postseason and had a better on/off rating than the two stars who are getting paid more than him. Patty Mills is not just the leader of the coffee gang. He can still play.

That being said, there is a chance the Spurs move on from Mills this summer. They do have an overabundance of guards all younger than Patty who need playing time, and there could be cap-related benefits from trading him without taking long term money back. Small guards who rely on quickness tend to not age well, and Mills’ decline is starting to get noticeable, especially on defense. Looking at the stats and the cap sheet will show a capable but utterly replaceable backup point guard on a sizable deal. Teams don’t typically hold on to those.

Patty is more than that when looked through the proper lens, so don’t be surprised if he’s there for training camp. San Antonio could use his shooting and energy off the bench, but most of all, the young ones could use his guidance. Whether you call it experience, corporate knowledge or familiarity with the Spurs’ way, Patty has it and is happy to impart it on his teammates.

Mentors matter. The Spurs now have guards ready to replace Patty in part because he was there to teach them and protect them. They probably are in no hurry to see him go, and neither should the rest of us.

Patty Mills was the leader the young Spurs needed
Source: Pounding The Rock