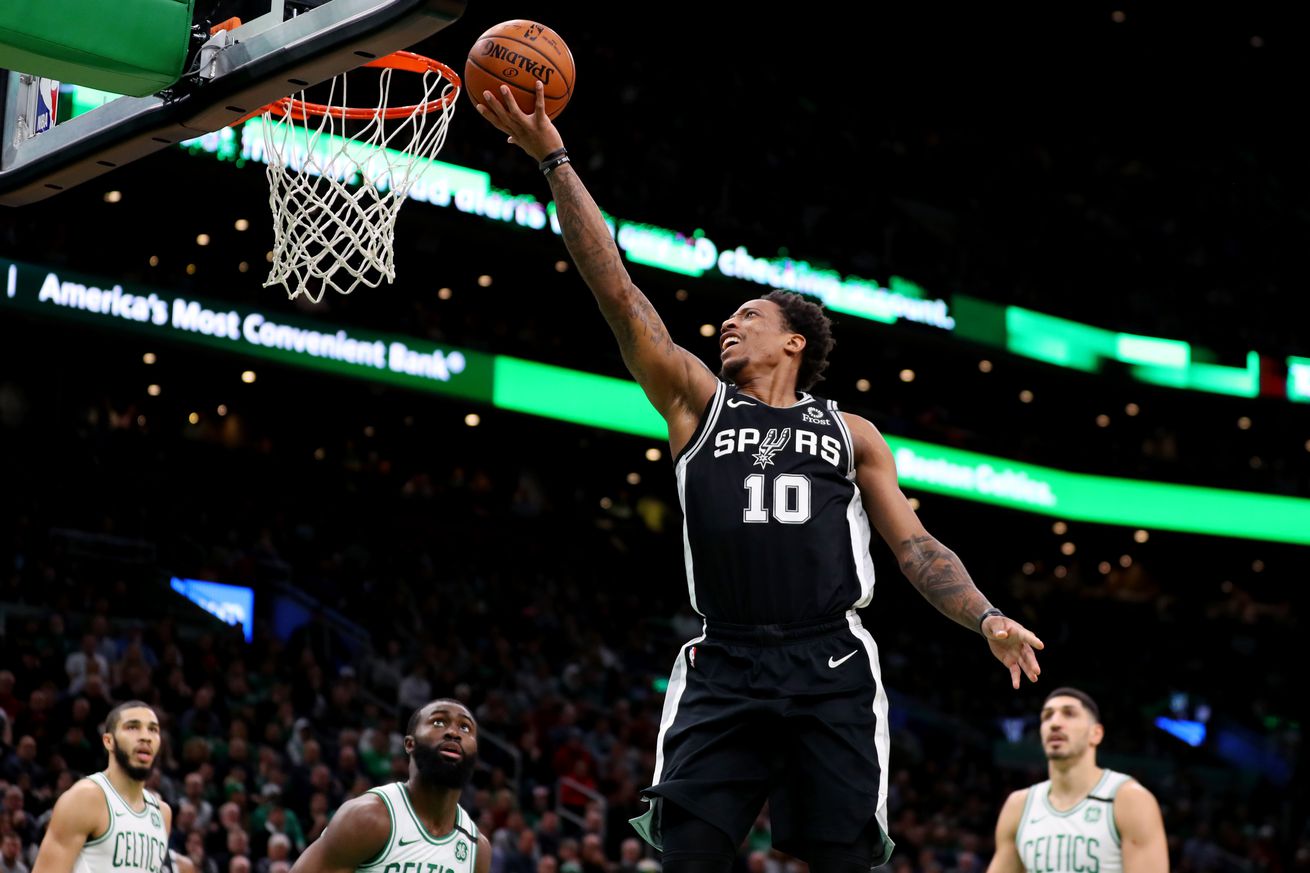 Trade deadlines, All-Star break, Rodeo Road Trip are coming. Which will be a part of DeRozan’s future?

It has been said that any given player is bound to play his heart out during a contract negotiation year. If that is the case, DeMar DeRozan is playing for his life.

The oft quiet and sometimes moody DeRozan expressed disappointment with the trade that took him out of Toronto, where he had pledged to stay. Luckily for him and San Antonio, the welcome he received from Spurs fans and players (especially Rudy Gay) convinced him the adjustment was worth it.

But since the top of the season and especially during the Spurs run of losses, a quick scroll through fanposts and comments unveil a willingness to trade the disgruntled guard before he can walk away at the end of the season.

One reason is that his price tag is high and bound to eat into the Spurs cap space. The Spurs are at a vulnerable point in their history. All of the greats have retired and the next generation of stars have not proven they can go it alone.

Veteran role players Marco Belinelli and DeMarre Carroll have barely seen the hardwood as of late, and that’s not a bad thing. But it leaves LaMarcus Aldridge, Patty Mills, and DeRozan to pass the torch without snuffing out the flame.

Just before Kawhi Leonard was traded, there was a belief that the Spurs’ hand was going to be forced into a rebuild. Had that been the case, there might have been a couple of seasons out of the limelight. That was definitely no way to show the greatest NBA coach in modern history the door.

But the addition of DeRozan comes at the subtraction of the younger players. Dejounte Murray, Derrick White, and Lonnie Walker IV all need playing time and DeMar’s presence distracts from at least two of them.

That said, DeMar and the Spurs need one another at this moment. The question remains, who will need more when the moment passes?

A search with keywords “NBA free agency 2020” reveals this summer’s cohort of available contenders is thinner than last year’s, meaning some players may be worth more than they would be if the likes of Kevin Durant, LeBron James, and James Harden were available to the highest bidder.

DeMar DeRozan, in particular, could cash in on the drought.

As recently as November 20th of last year, Yardbarker has DeMar DeRozan ranked as the 4th strongest grab in this summer free agency behind The Brow, Brandon Ingram, and Andre Drummond.

CBS Sports has DeMar DeRozan even higher, listed 3rd behind Davis and Ingram.

Earlier, NBC’s Nick Gloss had DeMar DeRozan racked 7th, but since their ranking, Draymond Green has re-signed, notching him up

But last July 23rd, Bleacher Report listed DeMar DeRozan as the most likely 2020 free agent to jump ship. Considering his ranking and a lack of an offer from the Spurs, that analysis could be accurate.

If other key players in the summer shuffle stay put (talkin’ ‘bout you Anthony Davis) the bidding for DeRozan might become a factor.

In fact, DeRozan’s stock might already be trending up as his run of great playing continues. He’s currently the only player since Michael Jordan to shoot over 53% for the season at this volume of attempts.

Even in a lackluster game, his performance is solid, as fans saw last Friday against Memphis.

It will be interesting to see if the rest of the basketball world takes notice. Beyond the All-Star fan voting is a community of people who know the sport. If they vote their conscious, DeRozan may just be decked out in Western Conference jersey next month.

But before that, the trade deadline looms and the question has to be asked – will DeMar DeRozan’s current outstanding play lead to a contract extension, or is his value going to attract teams who need a great shooter and have money to invest into their future?