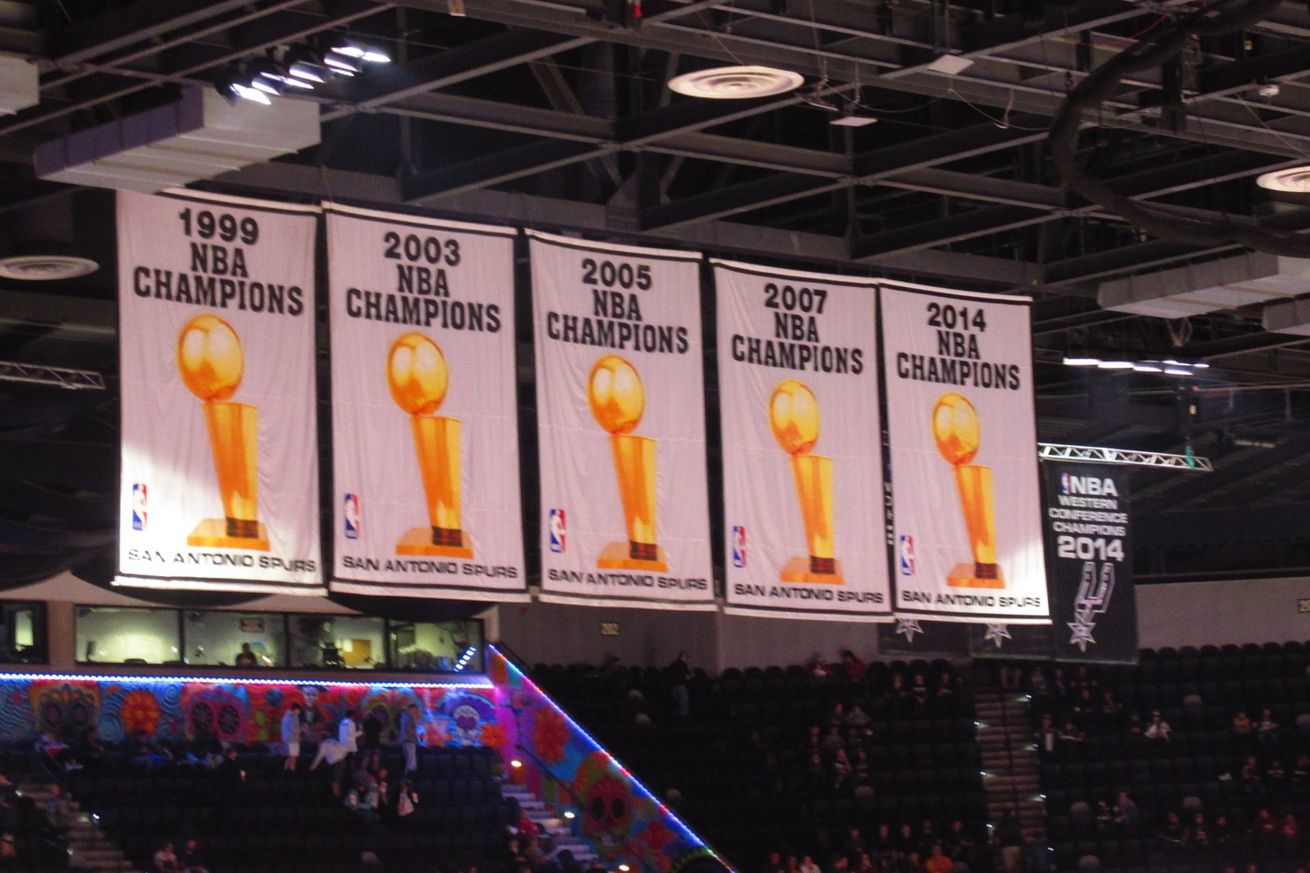 My favorite moments from five years at Pounding the Rock.

My first piece on Pounding the Rock was published on October 14, 2014, entitled “When I coached against Gregg Popovich.” Which means today is my fifth anniversary with PtR. Wow.

I have very few rules I strictly follow, but this is one of them: Whenever I have the fifth year anniversary of my very first piece on Pounding the Rock, I put together a highlight reel of lines from those five years. These are my favorites.

The first is from a random Spurs game in Sacramento in 2016, when Pop was about to pass Larry Brown on the all-time win list. This comment referred to how Pop started on his journey from coaching Division III ball at Pomona-Pitzer in the 1980s to where he is today: For the 1985-86 season, he spent a sabbatical from Pomona-Pitzer to coach with Larry Brown at Kansas:

“Put another way, if not for Larry Brown, Pop might still be coaching basketball at Pomona-Pitzer, probably teaching a few history classes on the side. And loving it.”

From the 2015 NBA Warriors – Cavaliers Finals:

“Much better than the call from Van Gundy and Mark Jackson that JR Smith’s flagrant foul was just ‘playoff basketball.’ No – it was assault with intent to inflict great bodily harm.”

From the write-up of Game 5 of the 2019 NBA Finals in Toronto, after Draymond Green blocked Kyle Lowry’s shot at the buzzer:

“Instead, Gasol did not move, remained in no man’s land, meaning Draymond could cover both Gasol and Lowry. That allowed Draymond to get out to Lowry to contest and tip the final shot, ending the game — leaving 18,000 Canadians stunned, looking like someone had just outlawed poutine.”

From one of my first pieces, “Coaching Youth Basketball,” from December 2014:

“Have fun. By your own example, teach your young players that basketball is fun. Put another way, avoid being one those coaches who suck all the fun out of the game. If you are deadly serious while coaching, your young players will find it difficult to have fun. Conversely, if you have fun while coaching, your players will too. Coach like you like doing it.”

Last but not least, during the Memphis game, J.R. Wilco announced that Anderson was on his way to a “triple nickel” — 5 points, 5 rebounds and 5 assists. I responded that ex-Spur and Laker Robert Horry once had 8 points, 8 rebounds, and 8 assists, which I called a “triple snowman.” J.R. asked what one would call 9 points, 9 rebound and 9 assists. We settled on “an odometer.” Yep, that should about do it for today.

From a piece about our trip to Australia looking for Spurs’ fans in the Land Down Under. Here, I describe Australian Rules Football:

“The game involves throwing or kicking an oblong ball around the field in all different directions, players tackling or crashing into each other whether or not anyone has the ball, referees randomly blowing whistles which the players seem to ignore, and points being awarded haphazardly to one team or the other for no apparent reason. In many ways, it looks like a Clippers game from the 1990s.”

From an August 13, 2016 piece which compared the San Antonio Spurs to another of my favorite things — Bruce Springsteen and the E Street Band:

“Among bands and sports teams, Bruce and the Spurs stand for commitment to greatness over the decades, giving maximum effort each time out. Of course, the band plays many more road games.”

In the summer of 2018, as the Spurs moved on from the Big 3 era, I wrote the line below. I am 100% confident that this sentence had not been included in any prior Pounding the Rock piece. Or anywhere else in SBNation, for that matter:

“Ancient Greek philosophers examined the metaphysics of identity in a thought experiment about the ship of Theseus, also known as Theseus’s Paradox.”

From a piece about a Lakers – Spurs game in Staples Center in December 2018:

I did in fact attend Wednesday’s hard-fought loss, in good seats to boot. Those seats were a few rows behind Denzel Washington, and allowed me to take this picture of a first-half highlight – one of my better live basketball shots. It also showed that LaMarcus Aldridge does occasionally get off the floor.

From a piece after Manu Ginobili retired:

“One of my clients was a wonderful 91-year-old fellow who had spent his career as a commercial real estate broker. One of the numerous sales he had handled led to him being deposed in a lawsuit. This is a small part of his testimony:

QUESTION: Are you married?

QUESTION: How long were you married?

My client’s answer encapsulates how I feel about Manu’s retirement. As great as it was to have Manu for 16 seasons, we did not have him long enough.

And, finally, from the piece that got me this gig in the first place, writing about Manu’s wonderful Game Five in the ill-fated 2013 Finals:

“KIRK: You know, my gut tells me we need to start Manu. It may be his last home game, and the crowd will get very emotional if we let him start. Bones, what do you think?

MCCOY: Dammit, Jim, I am a doctor, not an assistant basketball coach.

SPOCK: Captain, it would be illogical to start Mr. Ginobili. He is shooting 35%, averaging only 7.5324 points per game, and has more turnovers than rebounds. Frankly, starting a tribble would be more logical.

MCCOY: Jim, I hate to say it, but old pointy ears is right this time. Manu’s game stinks so bad it would knock a buzzard off a crap wagon.

KIRK: You are right about that. Bones, is Manu injured?

Of course, we all know that Manu, while old, continued to supply Spurs fans with many more highlights. He also made my first five years of writing here that much more enjoyable.