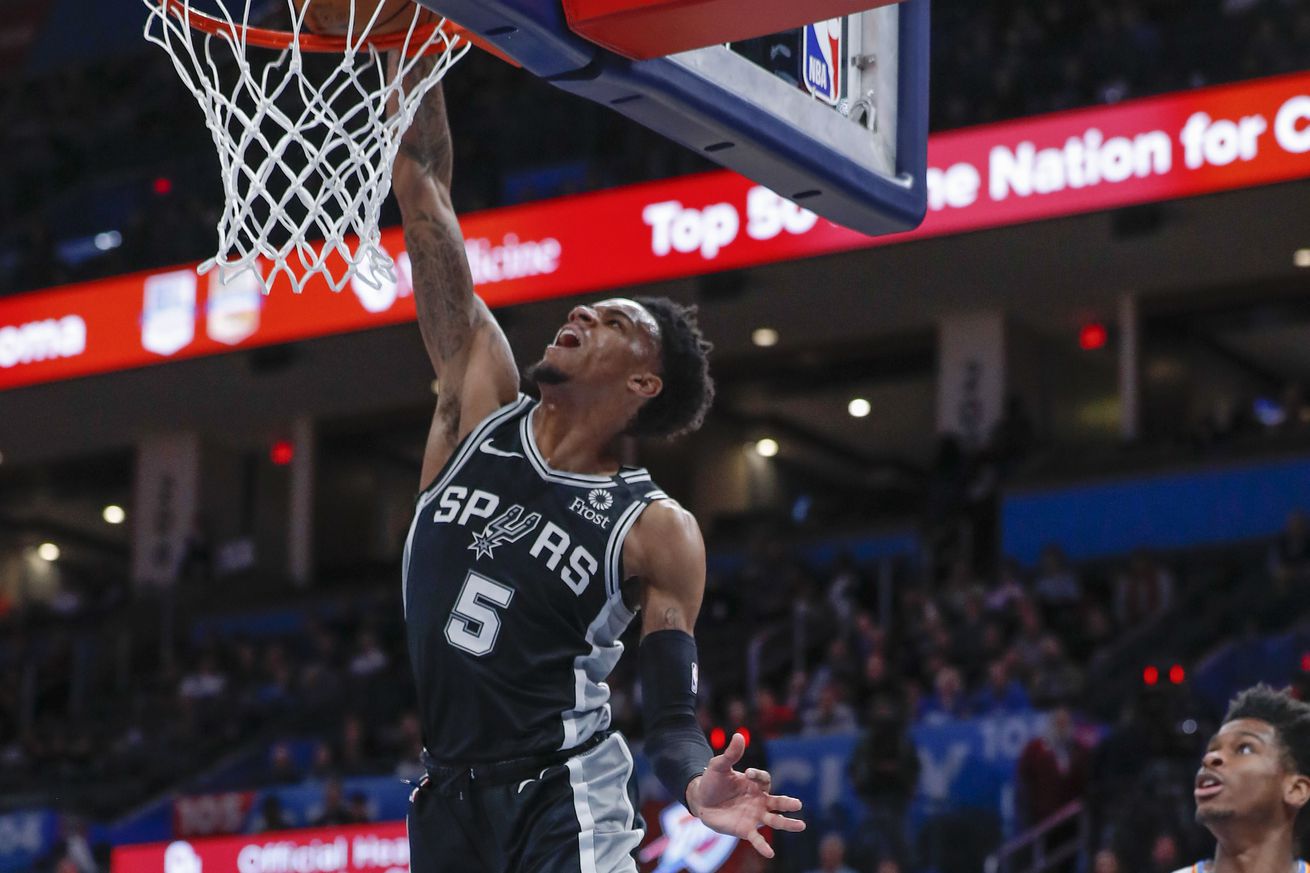 The Spurs go into the All-Star break on a high note.

I consider myself a bit of a horror buff. Some horror movies like to hit the viewer over the head with carnage right off the bat, while others effectively build tension before all hell breaks loose on the screen. No matter the path taken, there’s only one thing that’s guaranteed: it rarely ends well for the heroes.

While many fans of the San Antonio Spurs may consider the Spurs’ season as a whole to be something out of a horror film, their recent losing streak has had an eerie slow burning horror feel to it. The game starts out great. Shots are falling, opponents are missing shots, the Spurs are winning, and everybody is happy. Here’s the problem. We know what kind of film we’re watching.

No matter how good the Spurs look early on, or how big of a lead they build, there’s always the sense of impending doom. The carnage in this case has been the inability to stop the opponent in the second half of games, typically in the form of a barrage of three-point daggers straight into the heart of the Spurs.

Against the Oklahoma City Thunder, the Spurs started off right on script. Neither team was lighting it up early on, but the Spurs were able to generate enough offense to build an 11 point lead against a Thunder team that was only able to score 14 points in the first quarter. All the more impressive is that the Spurs were able to build that lead without connecting on a single three point attempt. To be fair, the Thunder only connected on one of their attempts. The second quarter wasn’t very pretty, as both teams had some very strange possessions. Dejounte Murray and Patty Mills combined for 15 of the Spurs’ 24 second quarter points, providing enough offense to give the Spurs a 49-41 lead heading into the second half.

The Spurs once again found themselves with a lead heading into the third quarter, but with the way things have been going, a second half collapse felt inevitable against a team that just so happens to have the best clutch scorer in league in Chris Paul. After extending their lead to 12 early in the third quarter, the Thunder went on an 11-0 run to cut the Spurs’ lead down to 1 point. This was it, wasn’t it? The Spurs had their moment where everything seemed fine, but we know what kind of film we’re watching.

Here’s the twist. Every once in a while a hero emerges in a horror film who posses a legitimate threat to the villain. In the third quarter, that hero was Derrick White. White replaced Murray with 4:30 remaining in the third quarter and the Spurs clinging to a 1 point lead. White quickly assisted on a Mills three-point shot, then hit a three-pointer of his own. White went on to score 6 more points in the quarter, which was just good enough to give the Spurs a 2-point cushion heading into the final frame.

Still, the signs of another collapse was right there in plain sight. The Thunder had just scored 36 points in the third quarter, only 5 points less than they had scored in the entire first half. White kept the Spurs afloat temporarily, but we know what kind of film we’re watching.

Bryn Forbes replaced Mills to start the fourth quarter, which meant he and Marco Belinelli would once again be sharing the court in the fourth quarter of a close road game. This duo has a -27 net rating in 163 minutes this season, by far the worst combination on the Spurs out of the 48 two-person lineups that have logged at least 150 minutes together this season. They were both in the lineup in the fourth quarter of the Denver Nuggets a game prior, and that went about as well as expected. This was is, wasn’t it? Gregg Popovich was stealth tanking his way into another loss. We know what kind of film we’re watching.

However, something strange happened. The Spurs were actually able to outscore the Thunder 4-2 in the first 2:30 of the fourth quarter before Murray and Lonnie Walker IV replaced Belinelli and White in the lineup. Belinelli still played 15 scoreless minutes against the Thunder — after going 18 scoreless minutes against the Nuggets — but at least Pop made the smart decision to not close out the game with him.

Murray and LaMarcus Aldridge played the role of the hero in the fourth quarter, combining to score 24 of the Spurs’ 35 fourth quarter points. Just like in the third quarter, the Spurs struggled to stop the Thunder from scoring, but also like the third quarter, the Spurs were able to generate enough offense to keep the Thunder at arm’s length. Murray and White combined to go 8-8 from the free throw line in the final minute of the game, which was great to see from the young guard duo of the future. Oh, and Murray also had this ferocious dunk to squash any thoughts the Thunder might of had at making a last second push.

The heroes might have come out on top this time, but we know what kind of film we’re watching. Anytime the heroes think they have defeated the villain, there’s always a sequel. And it’s true. Despite the result, the Spurs showed signs of wanting to give the game away. They got away with it this time because of a couple great performances, but they failed to prove they can hold onto a lead and compete for an entire 48 minutes. We’ll see if this game can help start some positive momentum coming out of the All-Star break, but until I see some consistency on both sides of the court, I’m going to continue watching games expecting carnage.