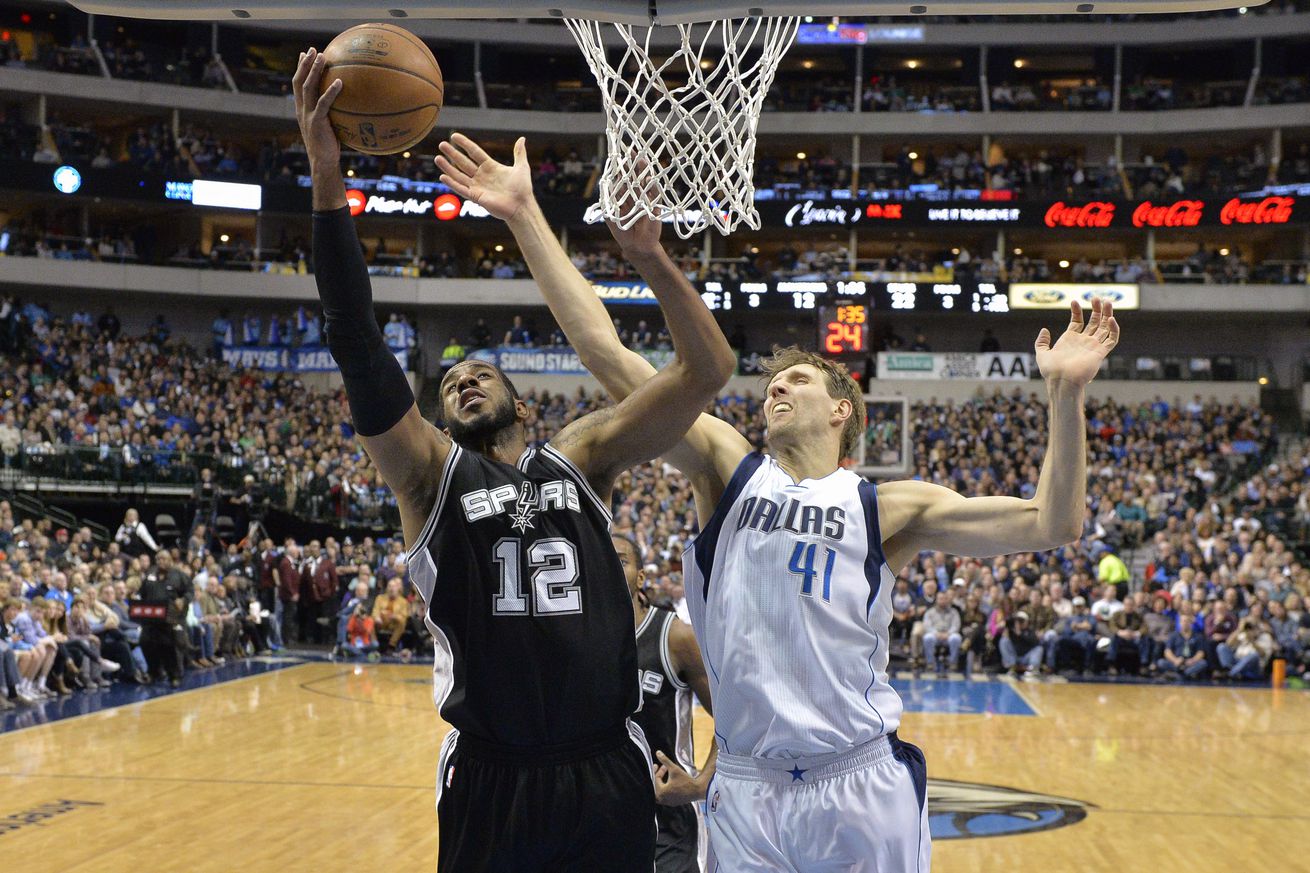 Will tomorrow be the last we see of Dirk Nowitzki? LMA doesn’t think so.

Wednesday’s regular season finale between the San Antonio Spurs and Dallas Mavericks promises to be a doozy, and not just because there will be playoff seeding implications on the line for the Spurs. It also may or may not be the final game of Dirk Nowitzki’s illustrious NBA career, which is reportedly bringing hordes of international media to a game that otherwise would fly under the radar to anyone else besides standings-watching Clippers and Thunder fans.

While the 14-time All-Star and one-time champion has yet to make any announcement or offer any clues about next season, there has been much speculation that this may be it for the German big man, and as a result there has been plenty of tributes as he travels around the country. Mark Cuban has even hinted at a tribute of some sort for the Mavs’ home season finale tonight.

Even so, LaMarcus Aldridge doesn’t think this is it for the player he watched bring his hometown team back to relevance during his high school days. Although he has no insider knowledge and has not spoken to Nowitzki on the matter, Aldridge thinks the “Goodbye Dirk” tour has been premature.

“I’ll go on record, I have not talked to him,” Aldridge said after the Spurs practiced on Tuesday morning. “I just think he’s so competitive and he loves the game so much that he’s going to come back. I think we’ve made a big deal about this being his last year, and I think he’s coming back.”

“I think he has one more year in him,” Aldridge said. “But that’s just my thought process.”

Of course, it’s always impossible to know what to expect when players hide their intentions. Some players want the goodbye tours. David Robinson got one in 2002-03, and players like Kobe Bryant and Dwyane Wade enjoyed plenty of tributes during their final seasons. Other players, like Tim Duncan, don’t want the attention and keep everything airtight before quietly announcing their retirement, or they just don’t know until they know, like Manu Ginobili.

There’s no telling what category Nowitzki falls into. He’s definitely one of the more unselfish superstars of all time, but he’s also not as adverse to extra attention as Duncan. Regardless, I’m sure the Spurs will have something up their sleeves for him tomorrow just in case. Although the IH-35 has been relatively dormant for at least 5 years now, it still won’t quite be the same once he’s gone.