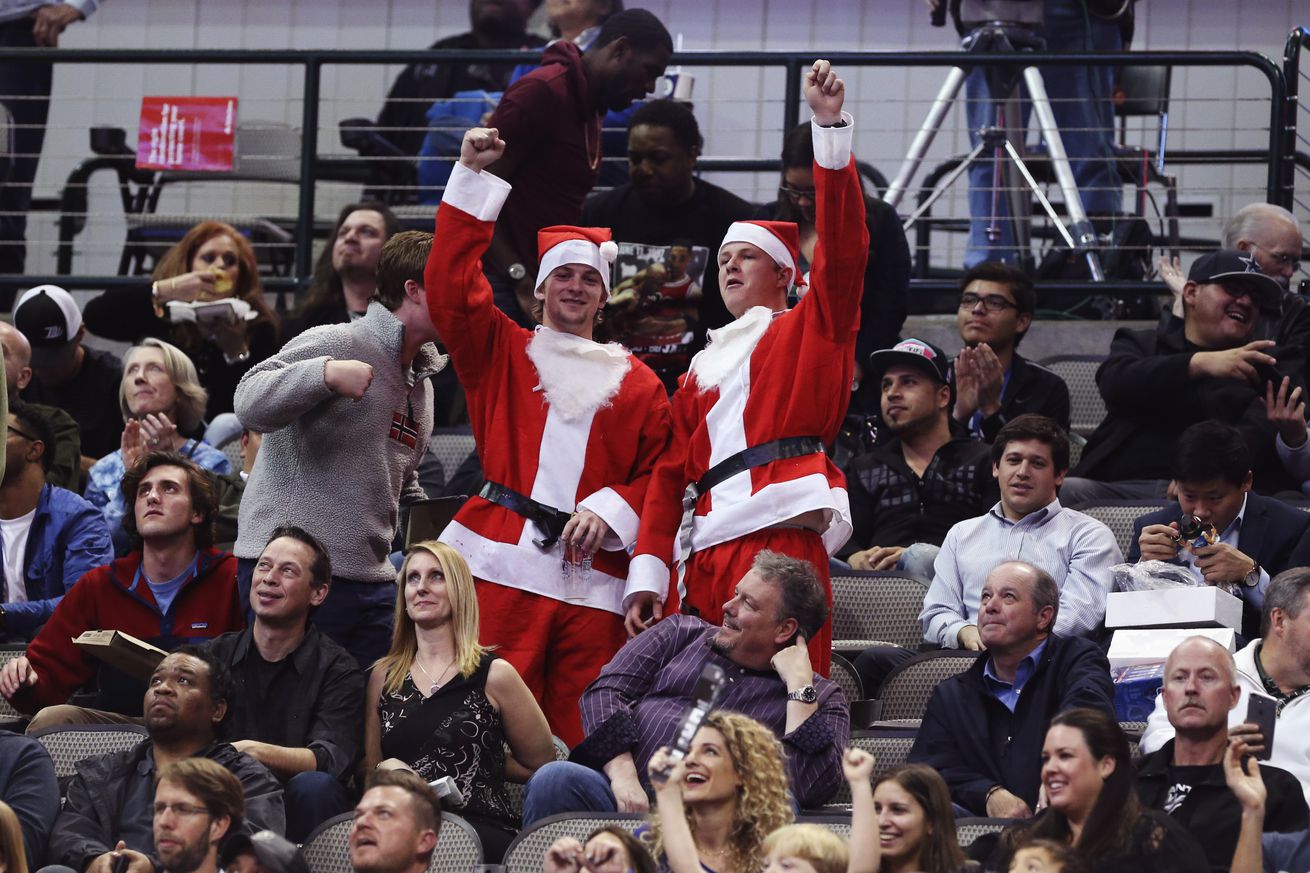 Almost all of San Antonio’s vaunted ‘‘corporate knowledge’ is gone, but the team is forging ahead.

The Spurs are rolling. Sure there have been some minor interruptions (darn you, Rockets!), but otherwise, San Antonio has been locking down opponents to under 100 points with a nice consistency over the last eight games.

This week PtR contributors Marilyn Dubinski, Marrk Barrington, Jeph Duarte, Jesus Gomez, and editor-in-chief J.R. Wilco discuss the Spurs December. Between defense and outside shooting the Spurs have many great games under their belts.

Join in the conversation as the panel will be discussing holiday traditions and their favorite Spurs moments of the holiday season.

The Spurs have held opponents under 100 points in seven of the last eight games. What’s the biggest reason for the defensive turnaround?

Marilyn Dubinski: Communication definitely seems to be a big reason for the turnaround, along with learning the system and gaining trust in each other. Players are talking to each other, and they can count on the help defense to be there when they switch. Without any elite defensive players it will take a team effort to stop other offenses, and in this stretch that ability to play team defense has shown well.

Mark Barrington: I think they’re starting to trust each other more handle switches better, instead of losing contact after just one or two screens. Also, Derrick White is coming into his own and playing much better on defense.

Jeph Duarte: The Spurs are coming into their own. They are starting to look intuitive on covering the open man. In most cases, the opponents best players are struggling which impacts then entire system.

Jesus Gomez: The players seem to be communicating better with each other. It’s really surprising how fluid the team defense is. Everyone is flying around after helping, even on a slightly more aggressive scheme. Davis Bertans and Jakob Poeltl in particular are doing an amazing job of being in the right place at the right time. It’s been fun to watch.

J.R. Wilco: Communication is indeed a huge part of the equation (three weeks ago I noticed Pop call a timeout and immediately approach Forbes and White as he made the talk sign with both hands), but I don’t think it tells the entire story. For me, it comes down to the extent to which the youngsters have learned Pop’s defense.

The other big variable in the recent wins has been hot outside shooting, with the Spurs making 47 percent of their threes over a nine game stretch. As weird as this may sound, are the Spurs too reliant on the three-pointer now?

Dubinski: No, because a vast majority of those shots are coming within the flow of the offense (perhaps with the exception of Marco Belinelli, but when he has it going you just live with that), hence why they have remained so efficient despite the slight increase in attempts. As long as they are shooting the open threes and not forcing things, they can take as many as they want, especially since it opens up the interior for The Mid 3 and helps prevent double-teams.

Barrington: They’re still less reliant than the average playoff team in today’s league. They say if you can’t beat ‘em, join ‘em, and this the Spurs finally catching up to the modern three point offense … as much as they can. They’re still going to rely heavily on the Mid 3, but they now have the ability to augment their scoring with a long range capability, and that makes them much more of a threat to do something in the playoffs this year.

Duarte: Not at all. The percentage is up, but they still average less than most teams. The key to their success is shooting them when they look good. Teams like the Rockets and Warriors will live and die by the 3. The Spurs use it as a tool which makes it viable,

Gomez: In a way, yes. Without hitting a large percentage of the threes they create, the Spurs simply don’t have an explosive enough offense to pull off the type of blowouts they’ve gotten recently. But they should still be able to score enough without the long ball to stay in games with most teams, so they are not a traditional “live by the three, die by the three” team.

Wilco: We might as well as if the league is too dependent on the three.

What was the most satisfying Spurs win during the month of December?

Dubinski: I’m probably biased, but I’m going with the Clippers win because it was such a dominant performance and the most enjoyable game I personally covered (both the preview and final score). As an added bonus, I will always be happy when Boban Marjanovic plays no matter how uneventful it turns out to be.

Barrington: It’s a tie between Orlando and the T-Wolves. Orlando, because they showed that they can be dominant on the road, and the Wolves because of the revenge factor for the blowout loss in the last meeting.

Duarte: I’m going with the Lakers win. It was game one of the recent run and an immediate response on a home-to-home. It also showed the difference between LeBron James going ballistic in the 4th quarter (20 points?!?) vs the Spurs outscoring the Lakers by 23 and shutting the King down.

Gomez: The win against the Sixers. After the loss against Chicago I was bracing for a losing streak. The Spurs destroyed Philadelphia instead. There’s nothing I love more than being pleasantly surprised by this team. Also, it was probably the last hurrah for the Dante Cunningham, starting power forward experiment. I like Dante, but I’m glad Pop appears to be ready to move on from him.

Wilco: The Magic, because it showed me that the excellent form they’d been showing off at home was sustainable on the road.

Pop shaved his beard after the Nov. 19 loss and didn’t show stubble again until December 7. The Spurs record without the beard was 3-6. Since then they’ve gone 7-2. Your take?

Dubinski: I was always anti-beard because the Spurs have never won a championship with him sporting one, and I remember him often growing them right after championships, only for them to not repeat (because we’re totally going to blame all that on Pop’s beard), and he’d shave it. However, this is a new team with different personnel than those days, so whichever works now, I’m all for it.

Barrington: I’m very pro-beard. I think shaving is a waste of time and energy, and Pop has better things to do with his time.

Duarte: When my daughter was three she made me shave my beard. It weirded out everyone around me as I hadn’t been without a beard for over a decade. I immediately regretted the decision and grew it back. Perhaps Pop saw himself in the mirror and knew the decision was bad. The record during this period only supports that choice.

Gomez: I’m almost sorry that Pop sported the beard before. I would have loved for it to be a late-career affectation, his not-so-subtle way of telling people “I’m getting too old for this s—t.” Alas, he grew it before, so I’m not as attached to it as I otherwise would have been. That being said, now that I’ve seen those numbers I’m in the “Pop, never shave again” camp.

Wilco: Mrs. Wilco and I agree that he looks 1000% better with the beard and he should never shave it off again.

Do you have any holiday traditions, Spurs related or not?

Dubinski: Mainly just hanging out with family more than anything. When the Spurs play I watch, but there’s nothing overly special about a Spurs game on Christmas to me. (It’s almost more of a nuisance to watch unless it’s an evening or nighttime game.). The biggest thing that is different about this Christmas than others for me is we are celebrating at my sister’s house in Houston instead of my parents’ in SA. This is my nephew’s third Christmas and pope likely the first he will have memories of, so now he can remember getting out of his own bed to see what Santa brought him at his house.

Barrington: Mostly, I like to have a quiet day at home. Recent life changes have made that no longer likely to happen, but I’m enjoying having a messy and loud house full of happy people, one of which is me.

Duarte: This year I bought a print of George Gervin and had him sign it for my daughter. The Iceman has become her favorite since we went to Rudy’s Seafood. She opened it, came and sat by me, hugged me with the maturity of an adult, and whispered that she loved me. There is a bond between us that involves the Spurs and she took a moment just for me. There is one of those every year.

Gomez: Christmas Eve is a little different here in Argentina. It’s actually a mix between Thanksgiving and New Year’s Eve is in the U.S. as everyone goes home for a big dinner and then party. Typically my house is where my friends and I get together before and after the family feast. It’s always great to get see my buddies that live away. It’s even better to host the impromptu reunions that take place between them. Those are always fun moments.

Wilco: We drive and/or walk around and look at Christmas lights. I remember sitting in the back seat with my grandmother up in Electra, Texas in the 70’s while the beautiful lights passed by the window, and now I’m the one driving the car while my kids ooh and ahh.

Join in the conversation in the comments below. Merry Christmas and Happy New Year!