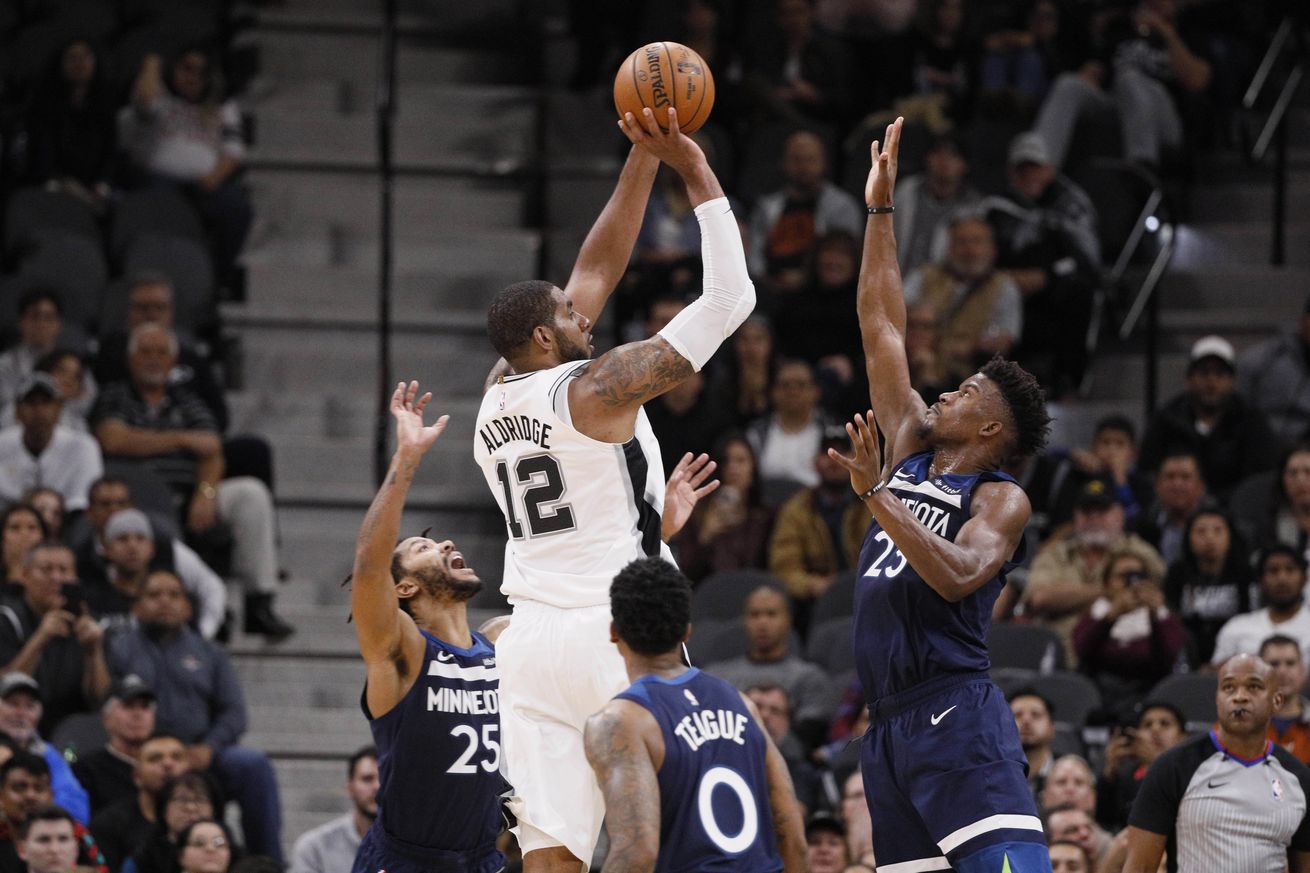 The Spurs offense is struggling. They have a 102.4 offensive rating in November, which is 25th in the league for the month. There are all kinds of problems scoring that plague the team, from players still not knowing the plays to missing open shots. But there are some simple things the team could do to improve.

One way is to improve the effectiveness of a play-type they probably shouldn’t be using as much as they are. I’ve talked before about when and how the Spurs could use postups, but they continue to feature it as a significant portion of their offense. Last night against the Suns, the team ran seven postups for LaMarcus Aldridge, and scored 4 points. That’s not bad offense — it’s terrible offense. LaMarcus shot 1 for 3 on those plays, which isn’t good, but the real problem is what happened on the other 4 possessions.

The Suns, and most of the teams the Spurs have played, doubled LaMarcus almost immediately on the catch all night long. The issue for the Spurs is that they are rarely able to take advantage of that double team to generate a high quality shot.

Early in the 1st quarter, the Spurs got LaMarcus the ball on the left side of the floor with plenty of time on the shot clock.

T.J. Warren digs down on LaMarcus off of Dante Cunningham, who then cuts to the rim. There’s a moment where LaMarcus has an opening to get the ball to Dante, but it quickly closes as Mikal Bridges helps off DeMar at the top of the key. But LaMarcus doesn’t immediately throw it to the guy Bridges was guarding. He waits long enough to pass it out to DeMar that Warren is already recovering to Dante. That forces Demar to attack a set defense. Look at the right side of the floor as DeMar goes to work.

There’s no space and nowhere to go. DeMar needs to receive that ball before Warren is able to recover so he can attack a defense that’s still rotating.

At the beginning of the 3rd quarter, the Spurs tried it again. LaMarcus gets the ball on the left block and the Suns double immediately.

Warren helps off Dante again, and Dante does the exact same thing, cutting to the rim. There’s a better opening for the pass this time, and LaMarcus has to take advantage of that kind of cut. But he’s a beat late, and Bridges helps off DeMar again to cover Dante. LaMarcus must throw DeRozan the ball the moment Bridges leaves him, but Aldridge both hesitates and throws the ball to DeMar’s left, taking him away from the rim and right next to Derrick White.

Derrick could have cut through to the corner instead of spacing back out to the top of the key and maybe that’s what LaMarcus was expecting when he threw the pass. If he had, Canaan would have had to choose which of them to cover, meaning White likely gets an open corner 3. He didn’t though, and DeMar is once again forced to attack a set defense. He gets to work against 6’0” Isaiah Canaan this time, which results in an uncontested jumper from the edge of the paint.

A few possessions later, the Spurs found LaMarcus with a mismatch in the post after pushing the ball up court off a rare Phoenix miss.

The Suns double right away and LaMarcus has Bryn Forbes open on the opposite wing. If he had immediately fired it over to Bryn, it’s 3 points, but he hesitates, allowing Deandre Ayton to catch up to the play. Since Derrick White is a little too close to Bryn, Ayton is able to hang out at the free throw line and disrupt both passing lanes. Derrick moves just enough to create a window and LaMarcus tosses him the ball. Derrick swings it to Bryn, but that extra moment forces Bryn to shoot against a close out from Canaan, and he misses the shot, though it’s still not a bad look.

1 minutes later, the Spurs were back in the same position, with LaMarcus on the left block, but guarded by Ayton this time.

T.J. Warren flirts with the defensive three seconds call before committing to the double and as soon as he does, Dante cuts to the rim. LaMarcus hits him on time this time, but Dante misses the 4-footer. Since he doesn’t have a layup, it would be better for Dante to swing this ball out to Derrick White for an open corner 3.

The common theme here is that LaMarcus’ postups do create an advantage for the Spurs offense, they just can’t take advantage of them.

This isn’t a new trend. LaMarcus’ passing and assist rates out of postups has been relatively stable for his entire career. Now that he’s shooting less than 42% on these plays, though, it’s become even more problematic that he doesn’t often make the right pass at the right time. If he’s going to continue to lead the league in postups, the Spurs have to find a way to get some value out of these lost opportunities.