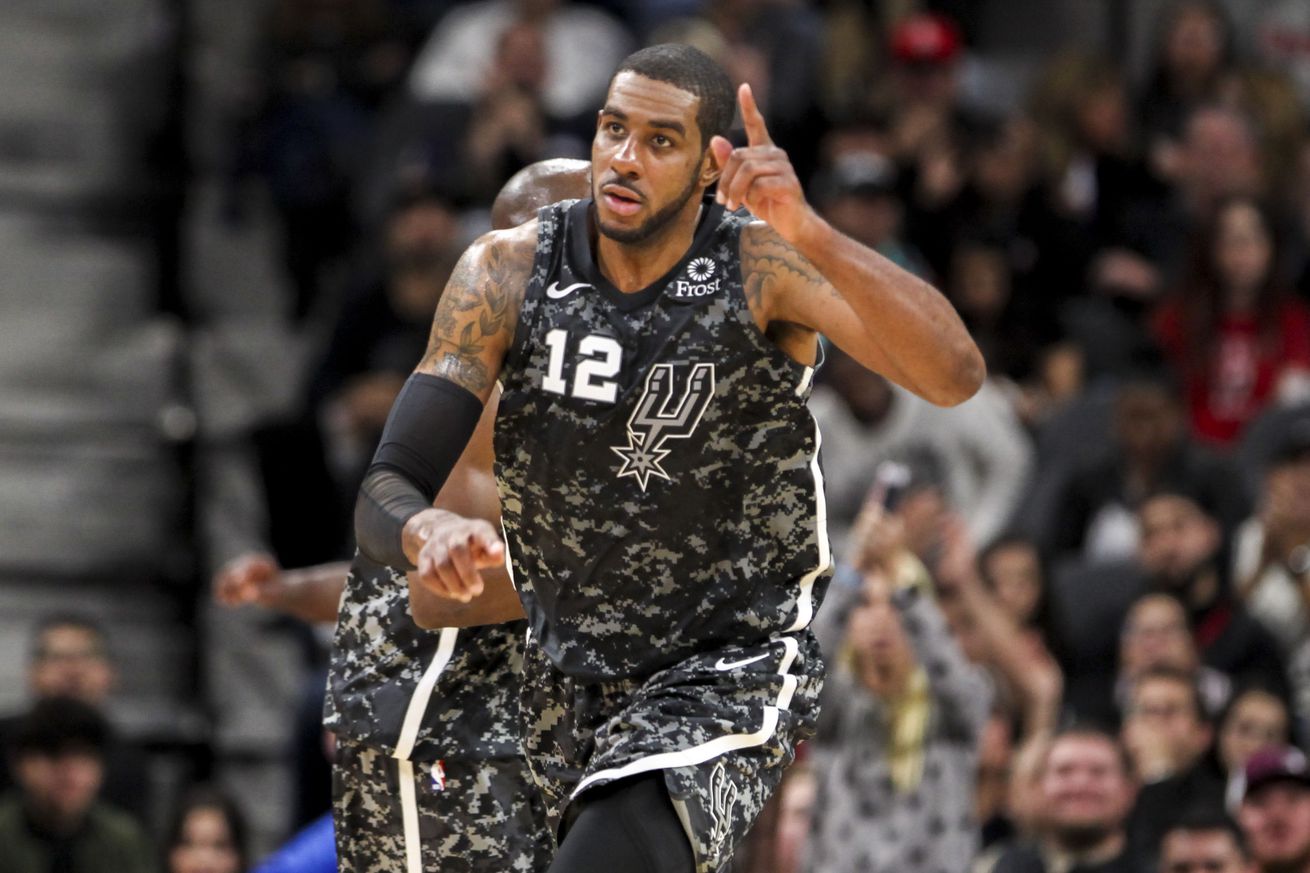 Against the Rockets, in crunch time, San Antonio used a pair of plays to help put the game away.

After giving up an 11 point lead late in the third quarter, the Spurs found themselves in a tight game to open the fourth. Two quick-hitting plays, which both leveraged the threat of a three to get easy buckets for LaMarcus Aldridge off Derrick White assists, were critical to securing the win.

With 7:58 to go, after a Chris Paul loose ball foul, the Spurs ran this sideline out of bounds play.

There’s very little about this play that’s unique. The Spurs, and just about every other team in the league, run a similar baseline action where a shooter comes off multiple screens several times a game. What makes this version interesting is how it highlights the holes in a switching defense when players aren’t on the same page.

At the start of the play, James Ennis is covering Bryn Forbes, P.J. Tucker is guarding DeMar DeRozan, and Clint Capela is guarding LaMarcus Aldridge. LaMarcus sets a screen on Eric Gordon to allow Derrick White to receive the inbounds pass at the top of the key, then moves back towards the right block. At the same time, DeMar and Bryn meet up on the left block, looking to draw a switch between Ennis and Tucker.

Bryn takes a couple of steps out towards Chris Paul, who’s guarding Quincy Pondexter, which causes Tucker to set up for a switch between him and Paul if Quincy and Bryn get involved in an action together. That puts Tucker in a position where he has to switch with Ennis again once Bryn reverses course and sprints into the paint.

Ennis is a little late to respond, and is trailing Bryn by quite a bit.

Capela sees Bryn heading his way en route to the wing for what he fears will be an uncontested three-pointer. Bryn was 3 for 3 on the night, so that’s a reasonable concern. Capela attempts to deny the pass to Bryn, thinking that Ennis will make the same read and pick up LaMarcus in the post. If LaMarcus lands this pick, Capela will have made the right play.

But LaMarcus has other ideas. The moment Capela leaves him, he slips the pick and turns toward Derrick, ready for the ball. Derrick is on the exact same wavelength, and as soon as LaMarcus is open, he makes the pass. Given that this happened immediately after a foul, and not out of a timeout, it’s likely this is something the Spurs had discussed prior to the game or at halftime, and not something they had just drawn up.

The Rockets defense has struggled at times this year, and for new players in the system like Ennis, learning to anticipate what teammates will do is critical. In this case, it looks like LaMarcus and Derrick took advantage of Ennis’ inexperience by leveraging the threat of Bryn’s outside shooting.

Not even a minute later, the Spurs used an identical concept to get LaMarcus another layup.

This time, Bryn is coming off staggered screens from Quincy and LaMarcus as he moves from the left corner up to the top of the key on the left side. Paul switches onto Quincy, Tucker switches onto LaMarcus, and Isaiah Hartenstein switches onto Bryn. That leaves two much smaller players between LaMarcus and the rim, but what really seals the deal is this little bit of movement by Tucker at the free throw line.

It looks like Tucker’s expecting Hartenstein to stay with LaMarcus, which would mean he’s responsible for Bryn. That’s not what happens, though, and that little slide gives LaMarcus a free run at the rim. Derrick puts the ball where only LaMarcus can get to it, and it’s another easy bucket.

These two plays stretched the lead back out to 6 points at a time when the Rockets were threatening to take the lead. In both cases, motion and the threat of outside shooting, coupled with perfectly timed passing, got the team points when it needed them most.