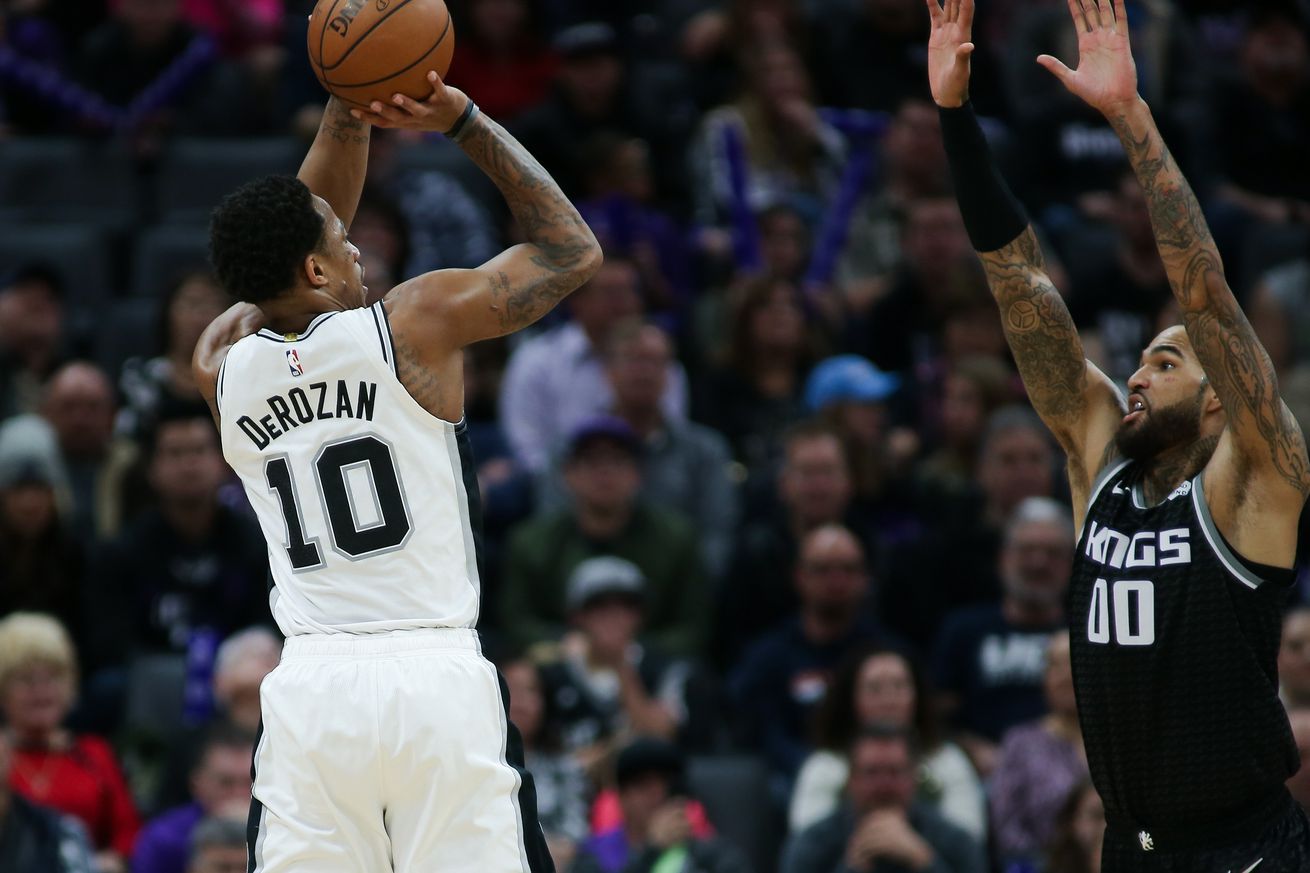 Rehashing the good and the bad from the RRT opener.

The Spurs’ Monday night loss to the Kings in Sacramento was a mixed bag. It’s a great sign that DeMar DeRozan may be finally breaking out of his slump, but watching the team get torched in transition and all over the perimeter was just the opposite.

With Derrick White sidelined with a bout of plantar fasciitis, the Spurs broke out a starting lineup with a net rating of -15.8 in the 56 minutes they had played together before Monday night. Davis Bertans’ 6th start of the season, alongside Bryn Forbes, DeRozan, Rudy Gay and LaMarcus Aldridge, worked out quite a bit better than that, though. In 11 minutes of play, they were a +1, which is pretty good when the team gets outscored by 15 points overall.

Part of that lineup’s success was thanks to some sorely missed early aggression from DeMar. After earning free throws on the team’s 1st possession, he got up 6 shots in the 1st quarter. He made 4 for a total of 9 points, the most he’s scored in a 1st quarter since the Toronto game.

It’s tempting to see DeMar’s box score as proof that his slump is at least partially due to White’s emergence, but that doesn’t appear to be the case. These looks are right in line with the shots DeMar usually takes.

The two isolations on the left baseline, one early in the clock and one late, are right in his comfort zone. He’s death against a mismatch from there; whether the defender is too big like Willie Cauley-Stein, or too small like De’Aaron Fox, doesn’t really matter. The same can be said about the pull up jumper he hits from just above the foul line. With Cauley-Stein picking him up as he takes the dribble hand off, he knows he’s got room and can let it fly with confidence.

The only bit of overlap is the play the Spurs ran for him 4 minutes into the game.

DeMar passes it to LaMarcus just above the 3 point line then cuts off Rudy’s outside hip towards the rim. With that part of the play covered, DeMar sets a cross screen for Bryn, who acts like he’s getting ready to come off a down screen but instead sets another cross screen for Davis. Meanwhile, DeMar takes a down screen from LaMarcus and pops out to the left wing for an in-rhythm catch and shoot jumper.

It looks a little different when they run this same for Derrick because he has more range.

Aside from taking Derrick’s place in that play, and a few others, DeMar filled much the same role as he has for the last couple of months. His touches, passes made and received, and overall involvement in the offense were essentially the same as usual, he just hit some more shots. It’s more likely that his assertiveness derived from getting that early whistle, and getting to see a freebie drop through the net, than from Derrick not being on the court.

Unfortunately, the modicum of success the starting lineup found wasn’t nearly enough to make up for the team’s complete inability to stop the Kings’ fast breaks. After giving up a season high 20 fast break points in the 1st quarter, the Spurs did relatively well the remainder of the game, giving up just 15 more over the rest of the contest. But their immediate collapse on the perimeter and in transition in their first game without Derrick for what might be an extended period of time is especially troubling.

Per Cleaning the Glass, the Spurs’ opponents get fewer opportunities in transition with Derrick on the court and score less efficiently on those opportunities. Without him, the team’s defense, already well below average, is in serious trouble of tumbling down towards the bottom of the league again.

Lest it be forgotten amid the storm of fast break buckets headed the other direction, it’s important that we take a moment to remember the best pass of the month so far, in any sport. Davis’ 73 foot bullet to Patty Mills for a layup with less than 2 seconds remaining in the 3rd quarter was as surprising in the moment as it is astounding in retrospect.

That ball travels from the baseline to the top of the key in a little less than a second and a half on a rope. It doesn’t even curve to the side, which is slightly incredible given how hard he threw it. Even a little side spin would’ve caused the ball to float left or right.

Patty’s break for the basket is impressive enough, but Davis’ recognition and execution is a thing of beauty, although given the game circumstances, the bench’s celebration is appropriately muted.