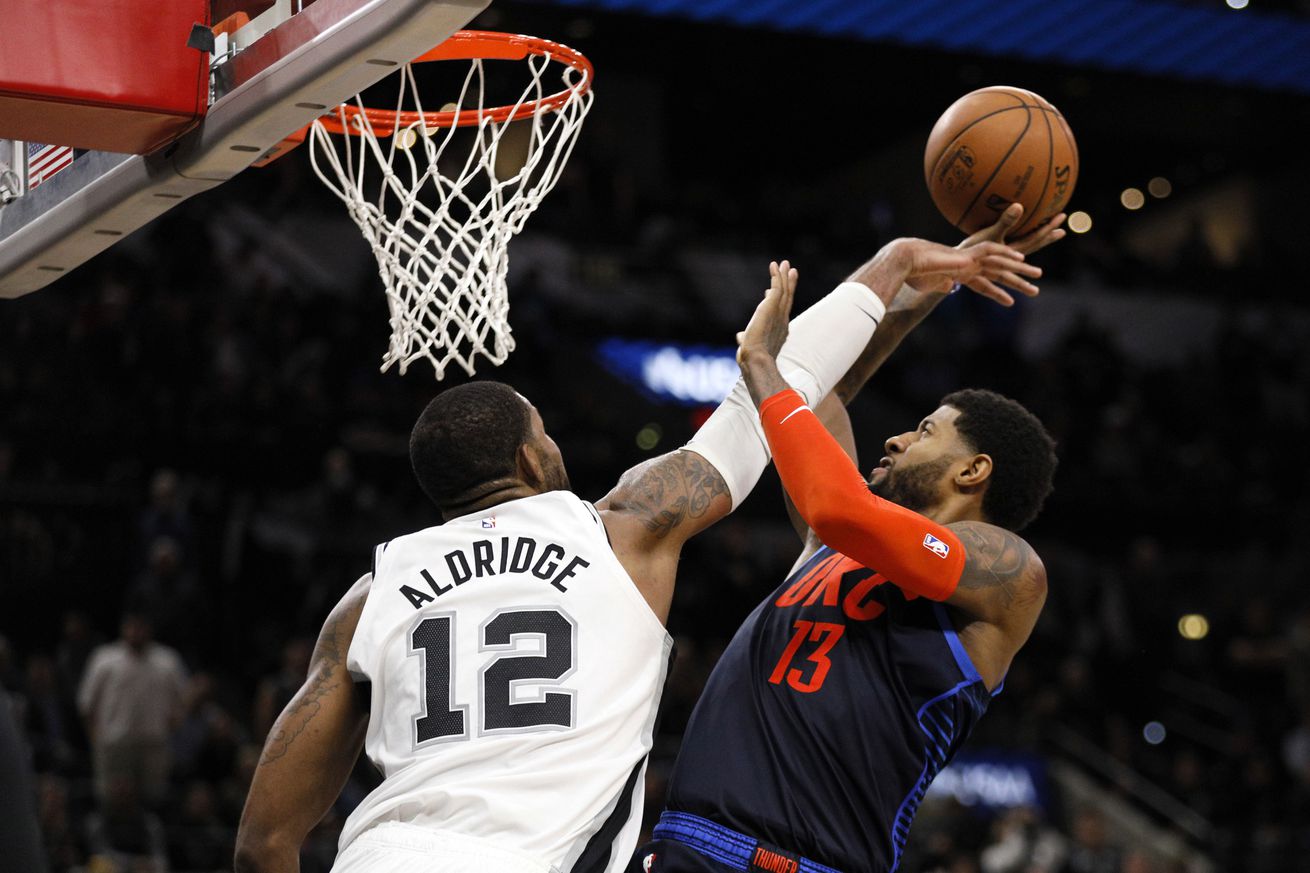 Two titans get together to clash once again, with the Spurs looking to take the season series from their rivals in Oklahoma City

These guys again ALREADY? After an epic back and forth affair that featured plenty of broken milestones and is most certainly a candidate for, “Game of the Year,” awards and on message boards and Twitter comments, the San Antonio Spurs will travel to OKC to once again take on the Thunder. At stake is a chance to take a commanding 2-0 series edge over the Thunder (they only meet 3 times this season) and to help move themselves higher up the Western Conference standings.

Maintaining a presence on the glass

For 3 quarters Thursday night, the Spurs held a modest +4 advantage on the glass, but were dead even in the offensive rebounding category. San Antonio did an excellent job boxing out and crashing the boards against an OKC team that, as I wrote before the last game, is top 2 in both total rebounds per game and offensive rebounds per game. Preventing second chance points is crucial to beating them, as they (usually) lack consistent offensive firepower from the outside, and for 3 quarters, the Spurs did just that …

And then the 4th quarter happened.

Going 5/6 from 3 and out-rebounding the Spurs by 7, the Thunder was able to fight their way back into a game that they had trailed by 12 coming into the fourth and force not one, but two overtimes. In the overtime periods, OKC was able to grab 7 more offensive boards (0 for the Spurs), but some big-time play and clutch free throw shooting from LaMarcus Aldridge helped San Antonio put the game away for good.

Adams, the hulking 7-footer from New Zealand, rolled his ankle Thursday night in the 4th quarter. Though he would make an appearance in the first OT and help force the 2nd with a gimpy dunk, he was on the bench in the final OT.

If Adams cannot go tonight, it should be another huge game for Aldridge. The All Star big man has been playing fantastic the last few weeks, and OKC lacks anyone with the size and strength to guard him except for Adams, which was clearly demonstrated on Thursday. OKC resorted to sending a variety of double teams at Aldridge to slow him down, but nothing would stop the big fella from scoring a career-high 56 points.

It will be important for Aldridge to dominate smaller defenders and continue to seal close to the basket as he has been doing so effectively this season. When OKC sends double teams, be they delayed or immediate blitzes, he has to continue to be aware and not turn the ball over (he had 5 on Thursday) while looking for cutters and open 3-point shooters. A double team means someone is open.

Look for your shot, DeMar!

I know DeRozan contributed to the win in other ways than just pure scoring (even though he did still end up with 16 points), nearly notching his 2nd career triple double, but the Spurs can only benefit from a strong showing from their All Star guard in the points column. Too often you see DeRozan get deep into the paint, only to force some bad passes where there really are none to be made. For a guy with such a terrific mid-range game, I’d like to see him shoot some more pull-up jumpers from just outside the restricted circle instead of trying to jam passes into teammates or get stuck in the air looking to pass.

I’ve seen talk online that he may be a bit fatigued, but that shouldn’t stop him from looking for other shots during his forays to the paint.

Game Prediction: Spurs by 6 (I was almost right last game!)

For the visitor’s perspective, please check out Welcome to Loud City.