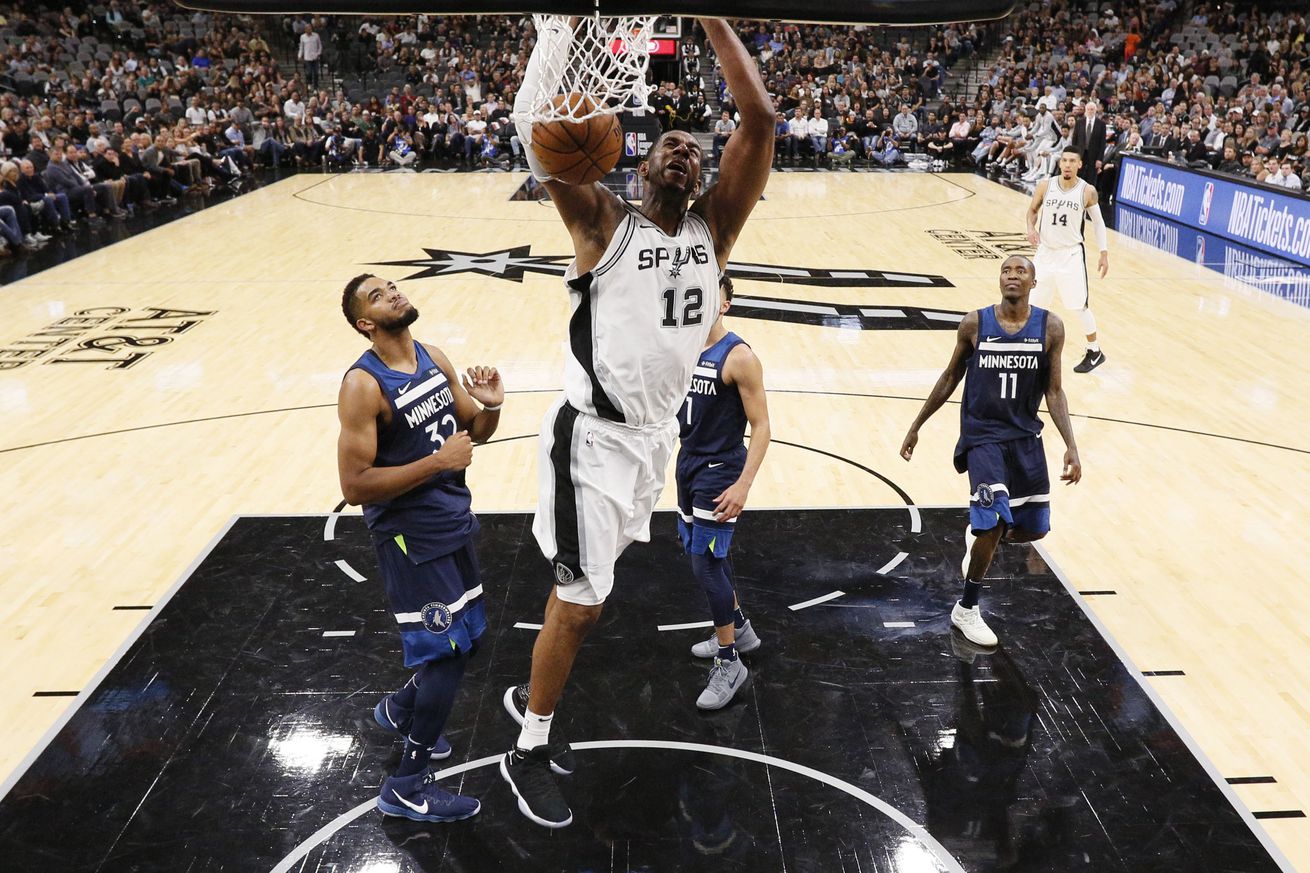 The Timberwolves come to town for a game with serious playoff implications and two missing stars.

Nothing has been as consistent over the past two decades as the success of the San Antonio Spurs, except perhaps the failure of the Minnesota Timberwolves. Just as the Spurs are nearing a rebuild, the Wolves finally appear to have found the right group to build sustainable success for the near-future.

And for the first time in over a decade, Minnesota is firmly in contention for a playoff spot. Prior to the Jimmy Butler injury, Minnesota has been graced with particularly good health; Kawhi has missed more games than their entire roster! Despite this, the Wolves are only the sixth seed right now. Their biggest issue is that

You have to go all the way back to the 2003-04 season to find a Timberwolves team with a top-10 defensive rating. Despite Tom Thibodeau’s reputation as a great defensive mind, he hasn’t done much to improve their situation this season. The Wolves currently possess the 26th best defensive rating, which trails the tanktastic Hawks, Knicks and Bulls.

There are several culprits for their defensive predicament. Andrew Wiggins has never been a good defender – 538 even dubbed him the “Least Defensive Player” last season. He hasn’t gotten any better under the tutelage of Thibodeau; opponents shoot 1.2% better when guarded by him, including 8.8% better in the paint!

When opponents blow by Wiggins, it doesn’t help that the second line of defense is Karl-Anthony Towns. Towns has certainly improved as a rim protector since his rookie season, but he still has issues with help defense.

Then, there’s the bench. To call it a disaster would be a tremendous understatement. Tyus Jones is the only average defender on their bench. They allow the 2nd most points per game of all benches and the worst field goal percentage. Every one of their lineups that features fewer than three starters has a negative net rating! Fortunately,

The offense makes up for it

4th in offensive rating, 3rd in field goal percentage, 2nd in turnover percentage and 2nd in free throws made. Those are some prolific numbers right there. It makes sense that they put those kinds of stats up – their starting lineup of Andrew Wiggins, Jimmy Butler, Karl-Anthony Towns, Jeff Teague and Taj Gibson is a whole lot of athleticism and length to deal with. What doesn’t make sense is the way they get there.

The success of their offense is confounding because the scheme feels like a relic of a bygone era. The Wolves are 29th in 3-point attempts in the league and they also attempt the 2nd most contested twos and 3rd most mid-range shots.

How are they actually successful with this? Let’s have a look at their shotchart:

This is basically a more extreme, more efficient version of the 2017-18 Spurs. They attempt as few threes as possible and try to get in the paint as much as they can. If that doesn’t work, they’re happy to opt for long-twos. After all, Wiggins, Butler and Towns are tough to guard because they are able to hit those shots. Minnesota’s offensive playbook may be an anomaly in the modern NBA, but because teams aren’t used to guarding such a style, it’s also the reason they have one of the league’s best.

Matchup to watch: LaMarcus Aldridge vs. Karl-Anthony Towns. In the two games between the Spurs and Wolves this season, the winner of the Aldridge-Towns matchup was also the winner overall. LMA had a killer 25-point, 10-rebound night to lead the Spurs to a 107-99 victory, and Towns followed with 26 and 16 a few weeks later. Kawhi Leonard and Jimmy Butler squaring off in a game with significant consequences would have certainly been a sight to see, but Aldridge-Towns is nothing to scoff at.

PtR’s Gamethread will be up this evening for those who want to chat through the game. You can also follow along with the action through PtR’s Twitter feed