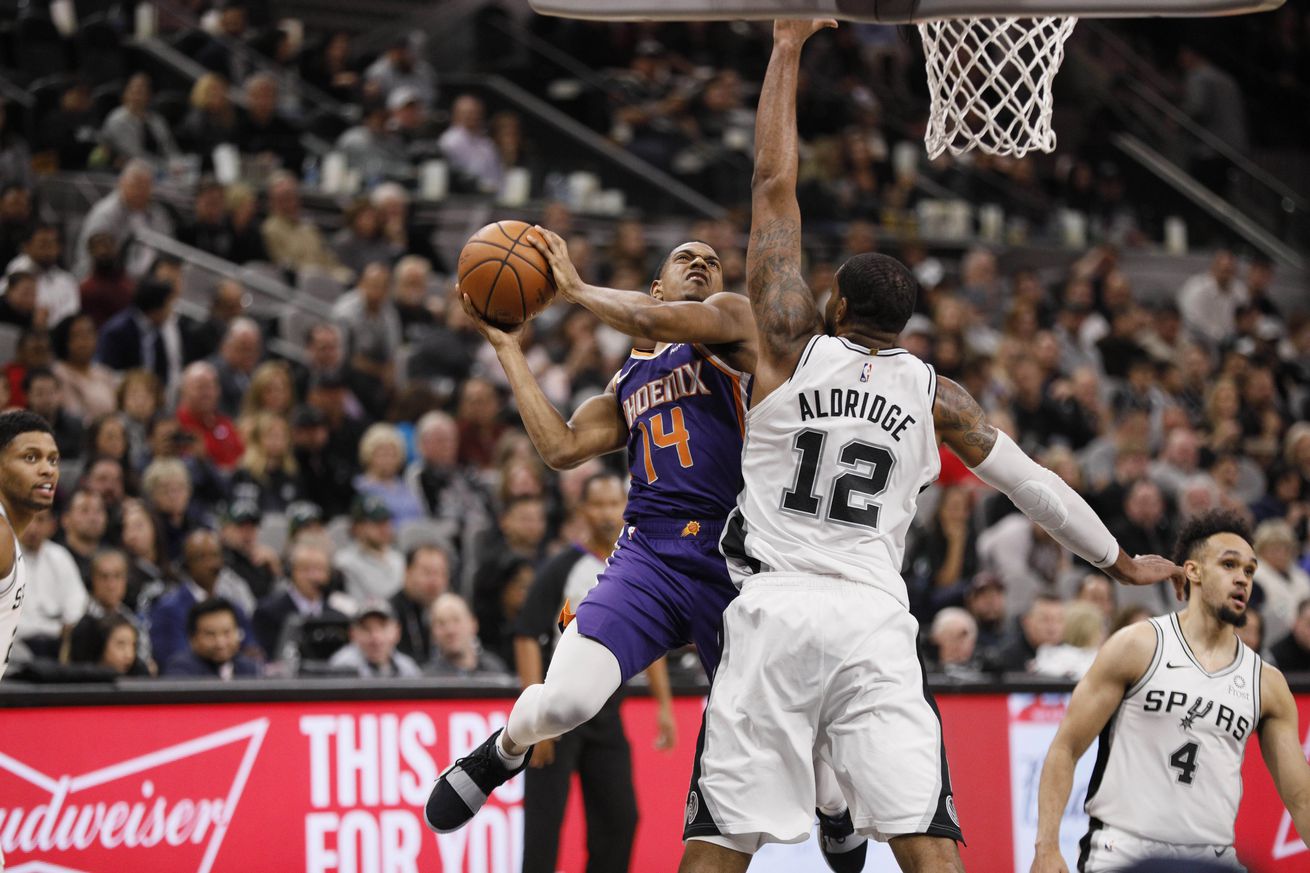 The Spurs will look to continue their quest to sweep this 4-game homestand before the Rodeo Road Trip against a banged-up Phoenix Suns team.

After settling into their homestand with a 132-119 victory over the Washington Wizards, the San Antonio Spurs will look to make it two in a row when the cellar-dwelling Phoenix Suns come to town. Phoenix, who are 2-12 in the month of January and 11-41 on the season as a whole, continue to look like a team wasting another year of standout guard Devin Booker’s career. As bad as they’ve been though, the Spurs would be wise to remember that they lost to this Suns team back in November, a wire-to-wire 116-96 walloping that saw the Spurs never really have any sort of grip on the game. Two months and a whole lot of improvements later, we’re about to see if they’ve learned their lesson.

Go to the (Aldridge) Well

LaMarcus Aldridge started this season off shooting the basketball horrifically. Coming off a campaign that was considered not only his best since coming to San Antonio, but his best ever, the big fella scored just 18 points a game and shot a putrid 43% in October and November, way down from the 23 points on 51% shooting that he averaged all of last season. As the losses piled up for San Antonio and the defense looked like Swiss cheese, more than a few fingers were pointed at Aldridge, even though he was still finding ways to contribute as both a rebounder and defensively at his position.

We know, of course, that he has since found his footing. Aldridge averaged 23 points a game and shot 59% in December, helping to lead San Antonio back from the brink of what looked like it was going to be a lottery-bound season. He’s continued that pace in January, even dropping a career-high 56 in a win over the 3rd seeded Thunder.

With a newfound love for sealing close to the basket and a variety of jump hooks and turnaround jump shots to compliment that flat-footed mid-range jumper that he loves so much, Aldridge has been dominating opposing bigs and teams that dare to go small. Watch how he bullies Jeff Green on the block, who is giving up a few inches and about 30 pounds:

During that 116-96 loss to the Suns back in November, Aldridge shot just 3 of 12 and appeared to struggle with the length of Sun’s rookie Deandre Ayton, who is an imposing 7’1”. With Ayton likely missing tonight’s game with a sprained ankle, the Spurs should make it a priority to continue to feed the Aldridge, who still has a shot to make the All Star team as a reserve.

The Spurs were actually relatively OK defensively during their win over the Wizards Sunday night. They held Washington to a modest 26 points in the first quarter and flat-out blitzed them in the 2nd half, allowing just 37% shooting and 50 total points, with more than a handful coming in what was essentially garbage time.

The problems came in the 2nd quarter, where the Wizards, led by the trio of Bradley Beal, Jeff Green, and Tomas Satoransky combined for 28 of a season-high for points in a quarter 43 for Washington. San Antonio was all out of sorts on that end of the floor, over-helping at times, poor defensive habits, and failing to close-out on shooters. Look how late LMA is to contest this Jeff Green 3-ball:

To avoid another blunder against the Suns, the Spurs can’t take them for the 11-41 team that they are. This team needs to bring their A-game every night in a Western Conference where you can go to bed as the 5th seed and wake up in 8th.

Crazy that I’ve gone the whole article and had yet to mention the Suns’ best player. Booker is a combo guard that is capable of everything offensively. He can hit you with the pull-up jumper, run and attack in pick and roll, and is a crafty driver in the lane. He’s averaging career highs in assists (6.7 per game) and field goal percentage (45%), and even though he’s shot the ball poorly from 3 most of the year (32%), he’s shown in the past that he can get hot from out there in a hurry.

Most effective defensive gameplans start with cutting off the head of the snake. That snake, in this case, is Booker. I fully expect Derrick White to get the assignment once again, as he’s done a phenomenal job guarding the opposing team’s best wing since he got his legs under him.

For the Suns viewpoint, please visit Bright Side of the Sun.