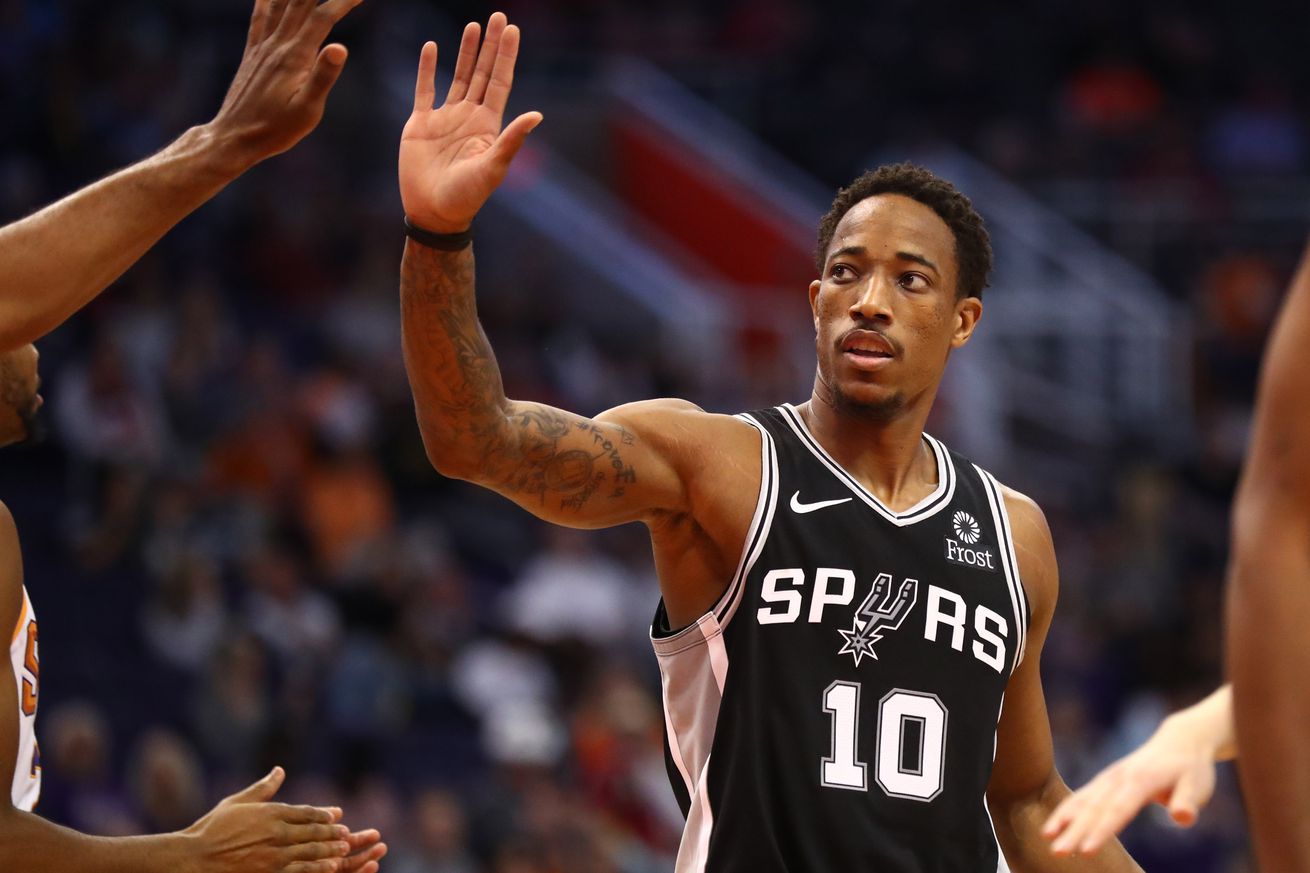 If DeMar can keep this current pace up, he should be in deep in the mix by season’s end.

It has only been nine games, but DeMar DeRozan has already exceeded most expectations in his limited time with the Spurs, and by extension has them exceeding expectations as well. After arriving in San Antonio with the reputation of an inefficient scorer, hesitant passer and unwilling defender, it has taken him no time at all to seamlessly fit right in to the Spurs system develop into one of the league’s premier offensive creators.

Despite missing three guards for the entire season so far (although that will change tonight with Derrick White’s return), the Spurs have fought their way to a 6-3 record, currently good for fourth in a Western conference that, at least for the moment, looks like it could have 13 teams vying for 8 playoff spots. DeRozan has no doubt played the largest role in this early but promising accomplishment, so should he be in the early discussions of MVP candidates?

Some sites currently have him on the outside look in, while others already have him at least in the discussion, but Managing Editor of NBA.com — Global Editions, Micah Adams, decided to delve even deeper into why DeRozan belongs possibly even in the top 3 of early MVP ladders, and its one compelling argument.

That he’s doing it while averaging more assists per game than two-thirds of the league’s starting point guards and making over half of his shots, something which he’s never done?

Just how rare is averaging 27 points and 6 assists per game on 50 percent shooting? It’s only been done 12 times in the history of the league by five different players.

Beyond just the historical factor, there is also to evolution to his game and willingness to learn under Gregg Popovich despite already being a proven star in his tenth season in the NBA. Whether it’s the improved play-making abilities or defense, voters like a well-rounded player. Micah’s article is a fascinating read, so be sure to check out the entire thing.

Unless the Spurs make a quantum leap towards “could seriously knock the Warriors out” contender status, don’t expect to see DeRozan announced as the league MVP at next summer’s NBA Awards ceremony. Asking him to convince enough of the media to vote for him over more glitzy candidates like Curry, Kevin Durant, Giannis Antetokounmpo, and even that guy up in Toronto whom he was traded for is a tall task.

However, if he finishes the season with similar numbers while leading the Spurs — whom many expect(ed) to miss the playoffs — to a top-four seed, then he should at least get the honor and recognition of being on the ballot and an invite to sit at the “MVP table” in late June (not sure that’s a thing, but you get the point).