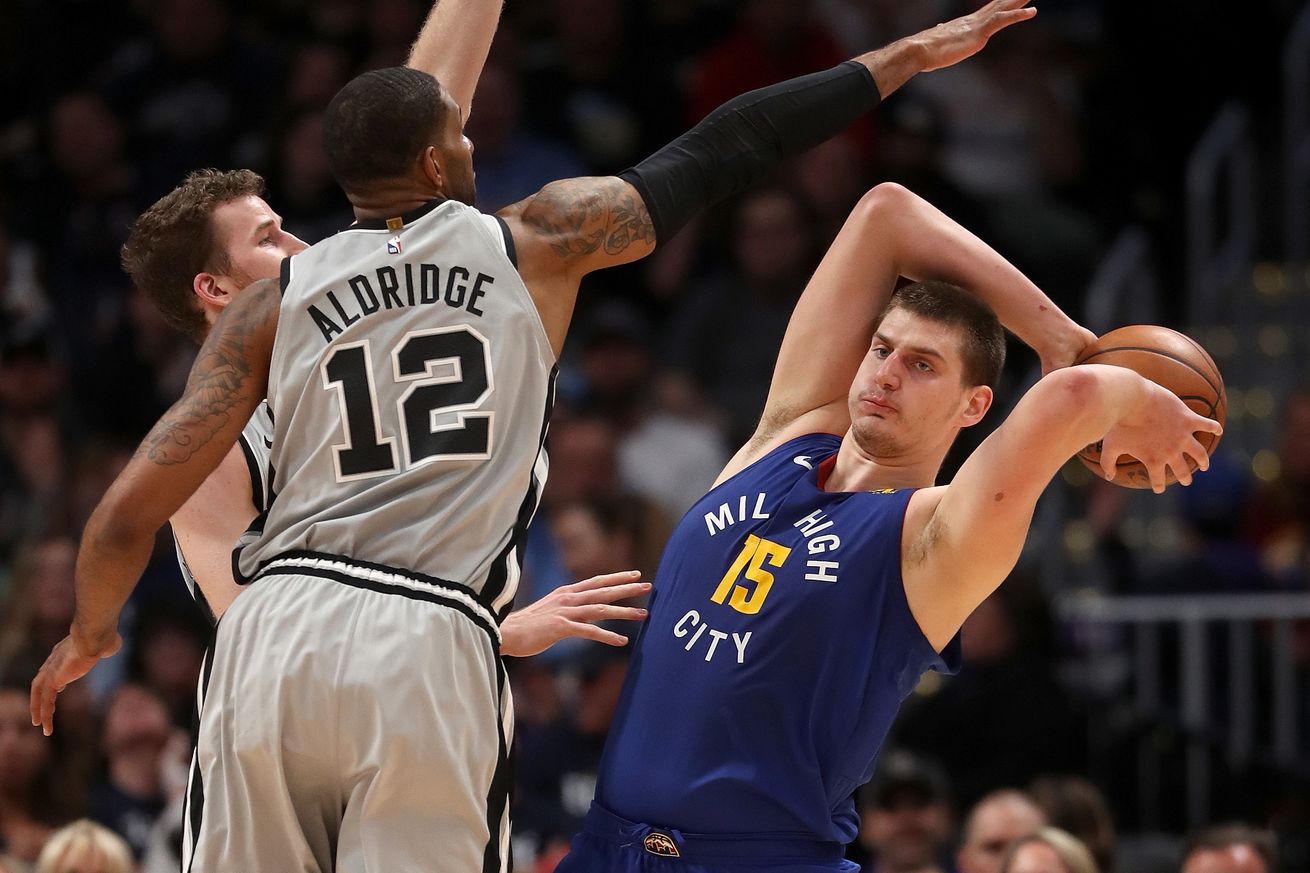 The Spurs can keep doing what works but need to be ready to switch things up.

The Spurs should be in no rush to change up their game plan as they approach Game 2 in Denver on Tuesday night. Having seized home court advantage with a Game 1 victory in which they led from late in the 1st quarter on, the Spurs will almost certainly run it back on both ends of the floor.

The Spurs rarely unveil major adjustments early in a series anyway, and certainly not when what they’re doing appears to be working. On top of that, they’ll be playing a Nuggets team with its back against a wall, and while a 2-0 series lead on the road is essentially a knock out blow, this will be a difficult game to win.

Still, there are several things the Spurs could improve on from Game 1, and at least a few major changes they should be considering as the series progresses.

The Spurs struggled to exploit double teams on post ups, a weakness the Nuggets will likely try to attack. But there’s an easy path for the Spurs to fix their issues here, and it only requires a small adjustment to how they space the floor.

The Nuggets primarily doubled off the player who made the entry pass, though they came from elsewhere when that player was a shooter like Patty Mills or Bryn Forbes. The Spurs, like many teams, have that player cut through the paint, either to the rim or circling back out to the top of the key, after making the pass. That afforded the Nuggets an easy opportunity to send a quick double.

It’s easy to see the Spurs’ preferred response, which is to send the now open player to the free throw line as an outlet. That worked twice early in the game, but the Nuggets dropped the weak side wing defender into the paint early enough to deter the pass the third time.

Even when they were able to get the ball into the center of the paint, the Spurs still weren’t able to score efficiently. The problem is how the rest of the players on the floor are aligned. Take a look at what Derrick White had to work with when he made this catch on the Spurs’ 4th play of the game.

His immediate options are a contested floater, a potential drop off to Jakob Poeltl, and a kick out to DeMar DeRozan on the right baseline. Derrick chooses the most open option, DeMar, but DeMar’s open here for a reason. The Nuggets are fine with him taking a baseline jumper, and since DeMar isn’t a three point threat, this is a great result for them.

The play looks a lot different when DeMar’s the one making the catch in the lane, though.

With Patty Mills in the corner, Jamal Murray can’t commit into the lane. Gary Harris is hustling back into position, but the only player between DeMar and the rim is Nikola Jokic, who’s also responsible for Jakob. DeMar took this jumper, which isn’t a terrible look, but he had a better option. He should’ve taken it to the rack.

Jokic would’ve had to choose between stopping him and giving up a layup to Jakob. Alternately, if Murray strayed too far into the lane to help, DeMar could’ve hit Patty in the corner.

Regardless of who makes the entry pass, when DeMar’s on the floor, he should be the one flashing into the lane as an outlet. With a shooter in the weakside corner, he’ll have plenty of space to operate and a couple of good options in front of him.

Jokic’s ability to gum up plays like this has a lot to do with how the Spurs used Jakob. By letting him hang out in the dunker spot, Jakob was in great position for drop off passes and to go for offensive rebounds and putbacks, but it made it very easy for Jokic to root himself at the front of the rim.

Jokic also dropped deep into the paint on ball screens, much as the Spurs’ bigs did on the other end.

If Jokic is going to drop that deep, the Spurs should add in some more creative ways to use Jakob. On the first clip, Bryn should work that screen over and over until he gets the shot he wants, preferably a clean look at a pull up three. On the second, once DeMar snakes back into the center of the floor, it would be interesting to have Jakob set an off-ball screen for Bryn instead of rolling to the rim.

Throwing unexpected looks at the Nuggets could result in some high value opportunities and perhaps force them to second-guess their preferred coverages.

On the other end of the floor, the Spurs did an excellent job of defending Jokic, limiting his opportunities, and forcing the Nuggets’ other players to hit shots. In this game, they couldn’t make the Spurs pay, but that’s not likely to be the case for an entire series.

Once the Nuggets start knocking down those open looks, the Spurs will be in trouble unless they try something else. They have a couple of options. One minor and relatively easy to implement change would be to do a better job of keeping their hands up when coming to double.

Jokic is an incredibly gifted passer who can read the floor in an instant and put the ball exactly where he wants it, but he throws all 3 of those passes right past a defender. The Spurs could at least make it a little more difficult on him.

Another way to do that, although admittedly a bit more complicated, would be to double with another big. Jokic’s lone turnover off a post up came on just such a play.

Trying to pass over or around LaMarcus is obviously much more difficult than any of the Spurs’ guards and it clearly affected Jokic on this play. Rudy Gay and Davis Bertans would likely present some of the same issues, too, so the Spurs do have some options if they want to spice up their defense.

Essentially, if the Nuggets get any more effective on the boards, the Spurs may find themselves at too big of a disadvantage to overcome. While the scheme worked well enough on Saturday night, the Spurs need to consider some more dramatic solutions. They’ve already essentially given up on transition, having scored just 2 fast break points in game 1, so the next step is an easy one.

The Spurs should consider sending another body to help box out Jokic and/or Mason Plumlee when the shot goes up. They would be a little more vulnerable to backtaps, but if the Nuggets get to the point where they’re rebounding over a third of their misses, the Spurs will have to pick their poison.

In the same vein, the Spurs may be confronted with another situation where they have no good options if the Nuggets continue to shoot so efficiently in the mid range. They made 12 of their 24 attempts between 4 and 14 feet, nearly matching the Spurs mid range efficiency. In large part, that was the concession the Spurs made to contain Jokic and keep the Nuggets’ ball handlers from getting to the rim.

Again, it worked well enough in this game to get the W, but the Spurs may want to fine tune their approach. Giving LaMarcus Aldridge and Jakob the freedom to stray another foot or two out away from the basket, as long as they can maintain the ability to contest at the rim, could force those shots out a few more feet. The risk, of course, is that they would get beat to the rim, potentially giving up easy points and exposing the Spurs’ bigs to even more foul trouble, an issue that nearly crippled them in the first half of Game 1.

The Spurs need to make that same decision on offense. As a team, they were perfectly comfortable pulling up before they got into the teeth of the defense. They took just 17% of their shots at the rim, low even for a team the placed last in the league in frequency of attempts within 4 feet.

That they somehow managed to hit over 49% of their mid range shots is one of the key reasons they won, but that’s almost certainly not sustainable. The team will likely be better off to commit to getting to the rim at least a little more often. They’ll get better looks, force more help defense and rotations, and draw more fouls.

Aside from 7 seconds of Lonnie Walker IV at the end of the 1st quarter, the Spurs stuck with the same 9 man rotation they’ve relied on for the last 2 months, but Game 1 exposed a few cracks that, at least in this match up, could become a problem.

The first and most obvious is how much the defense struggles with Marco Belinelli on the floor. While he managed to emerge from Game 1 with a +8, it had as much to do with the randomness of chance as anything else. The Nuggets made just 1/7 from three and 4/8 from the free throw line with Marco on the floor. Then again, the most important thing Marco brings to the game is a dash of chaos, so maybe it’s not fair to penalize him for benefiting from a little bit of luck.

Still, the team has a whole season’s worth of evidence that playing Marco and DeMar together is problematic on that end of the floor. DeMar’s going to play so much that they’ll have to spend at least a little time on the court together, but ensuring that occurs when it’s least likely to become a crippling liability will go a long way towards maximizing Marco’s contributions.

Assuming Derrick and LaMarcus can stay out of foul trouble, someone on the team will need to give up some minutes, and Marco should be the one spending more time on the bench unless the offense stagnates and needs another creator.

Rudy Gay, on the other hand, should get more playing time. He only played 26 minutes, but according to Dean Oliver’s net points statistic, he contributed the most of any Spur to the win. He can guard just about everyone on the Nuggets’ roster, he might be the team’s best help defender, and he can get a good shot just about anytime he wants. Unless they’re still managing his playing time, Rudy should be getting at least 30 minutes a night.

That will likely come at the cost of some of Davis’ playing time, which is a problem because of how valuable his shooting and toughness are. The issue is that the Nuggets are a difficult defensive match up for him. He can’t credibly guard any of the team’s bigs, and most of their wings are too quick for him. That’s not to say he can’t play, but like with Marco, the Spurs should consider being a little more deliberate with getting him in the game at the right time.

All that said, the Spurs are in great position as they approach Game 2. The pressure is all on the home team to avoid going down 0-2. The Spurs, meanwhile, will continue to ride their winning formula until the Nuggets show it won’t work. Once (if) they do, that’s when the fun really starts.