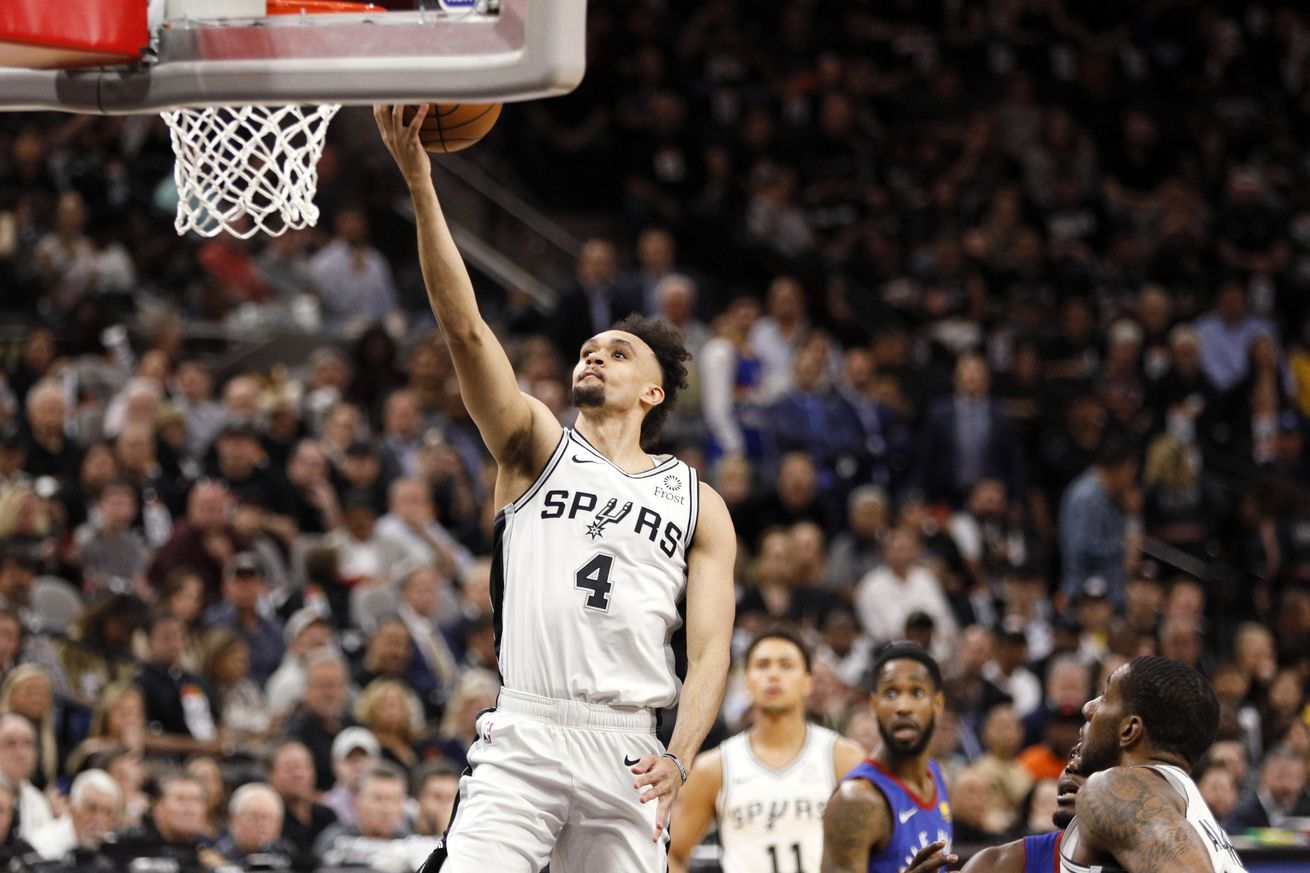 Derrick White was thrown into the fire this season, and boy did he deliver.

With Manu Ginobili retiring, Tony Parker leaving San Antonio, and the drama surrounding #2, last summer was memorable for all the wrong reasons. The one thing we as fans had to look forward to was watching the growth of the youngsters on the roster. Dejounte Murray was coming. His defense was already being awarded by the NBA, and summer videos showed an expanding offensive game. Lonnie Walker IV was the highest draft pick (not counting trades) the Spurs had for a very long time. Jakob Poeltl wasn’t flashy but was a former top 10 pick who showed promise as a solid rotational big in his sophomore season with the Toronto Raptors.

Then there was Derrick White. A late bloomer who ended up being drafted 29th overall by the Spurs in the 2017 NBA draft. White spent the majority of the 2017-2018 season playing extremely well in the G-League, where he ultimately led the Austin Spurs to a championship. He followed that up with a dominating performance at the Utah Summer League. His performance impressed the coaches enough to where they felt comfortable shutting him down for the majority of the Las Vegas Summer League. Even with all that success, White’s role on the team had yet to be defined. There was still Murray and Patty Mills on the roster. The Spurs had reportedly offered Parker a similar contract to the one he received in Charlotte, showing they weren’t quite sold on their point guard rotation.

In what was becoming an almost unbelievable amount of bad luck for the Spurs, White tore a ligament in his left plantar fascia on the same day it was announced that he would be the new starting point guard. He was expected to miss 6-8 weeks. With that news, the expectations for White this season were once again up in the air.

White returned to the court on November 7th against the Miami Heat. He immediately took over the starting point guard position, but after five games of minimal success, Pop relegated him to the bench. Over the next 12 games White came off the bench. His minutes fluctuated during this stretch, and as a result, so did his impact on the game. The Spurs went 4-8 over the stretch and it was starting to look like a lost season.

A few games into December Pop moved White back into the starting lineup and removed Dante Cunningham from the rotation. Those two moves took the Spurs to a new level. Even though White wasn’t a scoring threat at that point in the season, he was anchoring a defense that ended up being one of the top defenses in the NBA for the month of December.

January saw White take yet another step in route to his speedy ascension as a key player in the Spurs’ rotation. He scored 15.3 points on 60/47/75 percent shooting while averaging 4.2 rebounds, 3.9 assists, 0.8 blocks, and 1.1 steals. The Spurs went 10-5 in January, and their record could have been better had DeMar DeRozan not gone through the worst stretch of his season during this time-span.

In February White suffered another injury to his plantar fascia, this time in his right foot. He returned to the lineup at the end of February and was mostly up and down the rest of the season. He averaged a tidy 5.1 assists to only 1.4 turnovers in March, but he struggled with his shot, scoring 10 points a game on 41/28/78.6 percent shooting.

White was easily the best player for the Spurs in the first three games of their playoff series against the Nuggets, but in Game 4 the Nuggets adjusted their starting line-up and forced White to become a shooter, limiting his impact on the offensive side of the court for the rest of the series.

White exceeded expectations in almost every facet this season, but there are a few areas White should be focused on this offseason. Below is an excerpt from Marilyn Dubinski’s review of Derrick White for the 2017-2018 season:

If there was one concerning stat from his time in Austin it was only shooting 33% from three. However, he shot just under 40% in college and, in an extremely small sample size, hit 8-13 threes (61.5%) in the NBA this season.

White once again struggled with his outside shot, shooting 33.8% from three this season. Once the Denver Nuggets stopped respecting White’s shooting and sagged off of him, it became difficult for him to get to the rim and have a positive impact on the offensive side of the court. It got so bad in Game 7 of the series that Pop chose to bench White for Mills in the final 21 minutes of the game. Not surprisingly, the Spurs had trouble stopping the Nuggets’ guards once White was on the bench. If Murray and White are to coexist in the starting lineup next season, one or both of them will need to become at least league-average shooters.

White didn’t foul out of any games this season, but he did have the tendency to pick up quick fouls. It’s tough to ask him to be less aggressive though. The same defensive pressure that caused these fouls also caused him to wreak havoc on opposing guards. A little bit of discipline could go a long way.

Luckily, some of this should work itself out with the return of Murray. The Spurs will be able to switch on the perimeter more, reducing the number of fouls received while fighting over screens. Both Murray and White will be able to guard the opposing ball-handler, taking some of the pressure off of White. I really hope that spacing doesn’t become an issue because seeing both Murray and White on the court at the same is an exciting proposition.

White had a few incredible performances this season (the overtime win against the Oklahoma City Thunder comes to mind), but the obvious choice here was Game 3 of the first round of the NBA playoffs against the Denver Nuggets. Enjoy!

White’s highs were really high, but he had a few rough patches throughout the season. These struggles can be expected from somebody who was basically a rookie in the NBA and was taking on a far heavier load than had been expected going into the season. Even so, White still exceeded expectations in almost every conceivable away.

Up next: Quincy Pondexter