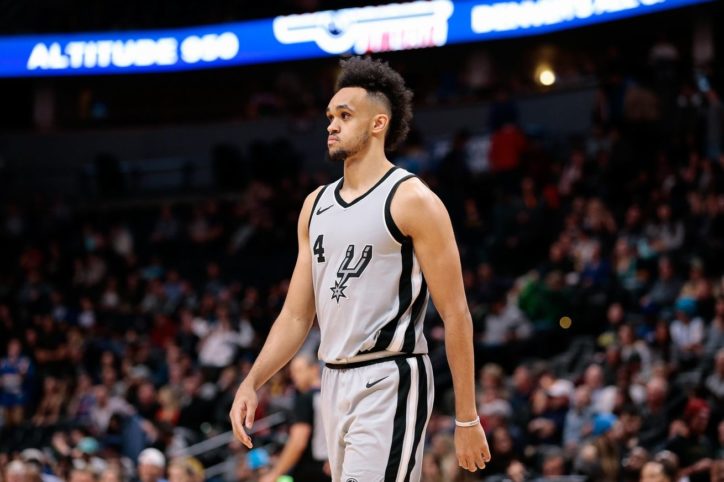 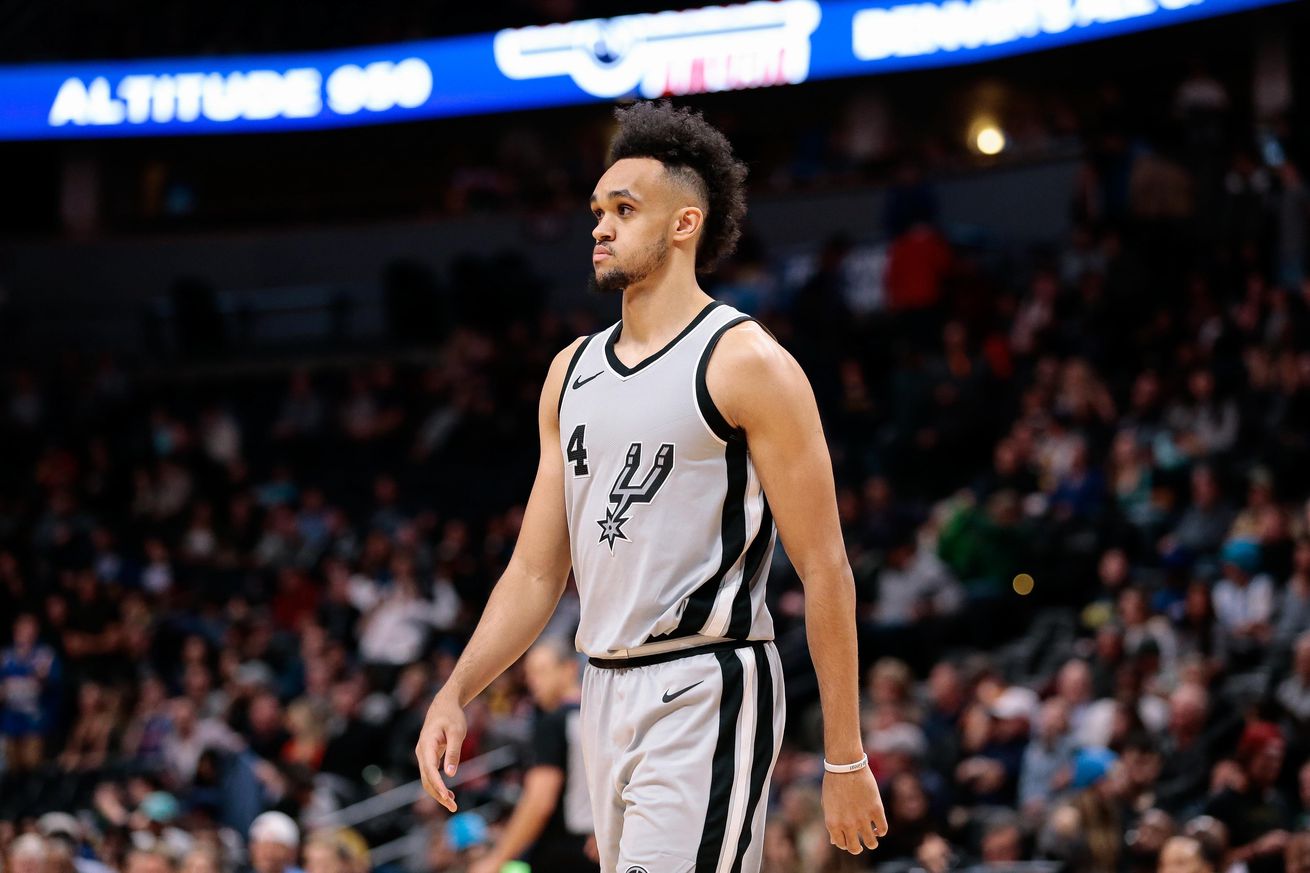 The two role players have given San Antonio the edge it was lacking.

After a rocky start of the season, the Spurs have slowly started to find an identity. They don’t rely exclusively on the stars to generate offense and they have developed a cohesiveness on defense that just wasn’t there back in November.

Several factors contributed to that progress, including Gregg Popovich finding his core lineups and tweaking both the offensive and defensive systems. Yet the emergence of two role players has been as important as anything else in the process.

Davis Bertans and Derrick White have allowed the Spurs to find their bearings and regain the aggressiveness of past seasons, with the Latvian sharpshooter greatly affecting the offense and the second-year guard having a big impact on the defense.

Davis Bertans and the return of the .5 rule

Back in 2016, the Spurs used to have a .5 rule, which meant that players were expected to shoot, pass or drive withing .5 seconds of receiving the ball. The idea behind it was simple: in order for the offense to have any flow and for it to keep the defense a step behind, no one can be a ball stopper. It was the philosophy that powered the Summertime-era Spurs, which used to ping the ball around until finding an open man.

The .5 second rule fell in disuse in recent years, for understandable reasons. Stars can get their own shot whenever they want, but they need some time to set it up. The problem was that some role players were also starting to hold the ball more, either because a more plodding offense needed them to or because they lacked the tools to make and execute the right decision quickly enough. The result was a more predictable attack.

Davis Bertans is helping change that. No one on the team is quicker to decide what he’s going to do upon getting the ball than Davis. His first instinct is to shoot it, even with a hand in his face or from a couple of steps behind the line. He’s shooting 48 percent on three-pointers, so it seems wise that he defaults to that option. Yet it’s not the only thing Bertans can do. When the closeout is too aggressive, he immediately attacks it, typically looking for the defense to collapse to he can find the open man. If the opponent’s defense is slow to rotate, he’ll waste no time making the extra pass.

Bertans has a tiny usage rate and averages the second fewest touches per game out of any Spurs rotation player, yet he undoubtedly makes an impact on offense. He’s a killer shooter and he boasts a sturdy 15 percent assist percentage on his limited drives. He doesn’t hold the ball and he doesn’t try to do too much. His style makes him a perfect fit for a bench unit that is filled with guys that do a little bit of everything but can’t consistently create their own shot. Even with the starters, who will always play a more methodical game, he’s a better fit than Dante Cunningham, who struggled making quick decisions.

Bertans alone is not responsible for the Spurs and especially their bench looking more like past iterations of the team. Patty Mills, Marco Belinelli and Jakob Poeltl are also buying into the .5 rule. Even DeMar DeRozan makes his moves quicker when he shares the floor with them. Yet none of those players exemplifies the value of not holding the ball like Davis.

The Spurs lost some of their best defenders last offseason. Danny Green was part of the Kawhi Leonard trade and Kyle Anderson signed an offer sheet that was simply too rich for the Spurs’ blood. Then Dejounte Murray got injured. By then it was obvious that the team was going to struggle on that end and that, considering the personnel available, they were going to be less disruptive and aggressive than in previous years.

The start of the season confirmed all fears. Everyone tried their best on defense, but the talent just wasn’t there. The Spurs were futilely trying to play the same type of scheme with players that were ill-suited for it. Pop made adjustments to the system, involving more players in the pick and roll and allowing for more help on half court settings. The tweaks helped, but not as much as the emergence of Derrick White after an adjustment period following an injury.

White became the starter on what looks like permanent basis on Dec. 9. Since that date the Spurs’ defense has allowed under 101 points per 100 possessions, the third best number in the league in that stretch. When White has been on the court, the defense has been even stingier, allowing just 94.9 points per 100 possessions, seven fewer points than when he’s been off. The starting lineup, by far the most used unit in that period, boasts a tidy 102 points defensive rating. The Spurs have gone from having an atrocious defense to temporarily jumping all the way to the elite while showing the tools to at least not return to the bottom in the process. White hasn’t been solely responsible for the turnaround, but he deserves plenty of credit.

White is as close as the Spurs have to a stopper. He’s become their go-to guy on tough guard matchups, as he has good length and quickness, solid instincts and relentless aggression. That last aspect was missing from the team in the past. White is not content with staying in front of his man; he wants to make life hell for him. He plays ball denial well, uses his quick hands to make timely swipes and fights through screens. Opponent turnover percentage is at its highest when White is on the court, but not their free throw attempt percentage. White defends well without fouling while also being disruptive, as exemplified by his six-steal night against the Nuggets. That’s a tricky balance to strike.

The Spurs have given up size in order to insert White into the starting lineup, but they’ve gotten back aggression at the point of attack. It was a worthy trade off. White’s energy on the defensive end has been contagious, too. He’s been a perimeter version of what the Spurs had with Cunningham, only better since he has more offensive skill to boot.

A lot of players have stepped up in the Spurs’ recent stretch of solid play. For some, like Marco Belinelli, it was about finding more consistency. For others, like Jakob Poeltl, it had to do with the team discovering how to best use him. Everyone’s contributions have been valuable.

Yet what Bertans and White have done deserves special attention. Their stats might not be as impressive as others, but those two are as responsible for the Spurs turnaround as anyone else.

With their play, both at the individual and team levels, they have allowed the Spurs to rediscover their selflessness and aggressiveness on both ends, which was clearly needed to give a talented but often incongruous roster an identity.