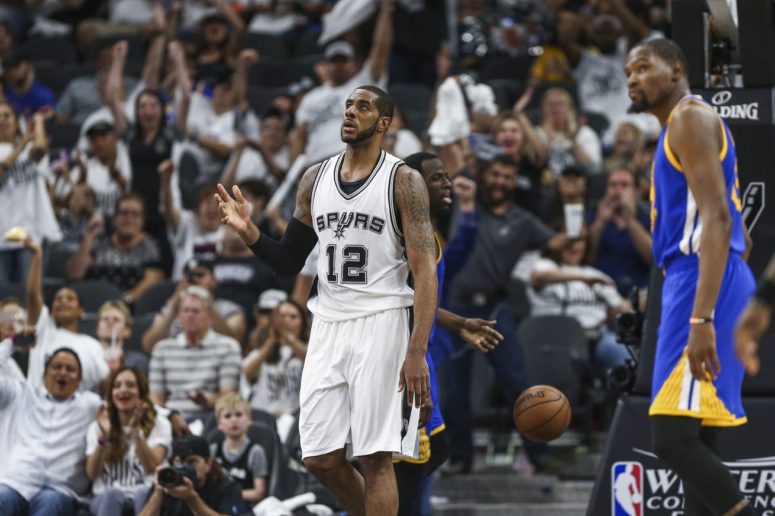 In the lead-up to the NBA Draft, the Spurs rumor mill whirred as loudly as ever as fans, against their own experience and better judgment, leaned into the possibility of the team taking a big off-season swing for the fences. Reports percolated that PATFO was pursuing a landing spot for the reputedly disappointing, allegedly malcontent LaMarcus Aldridge, with designs to net a top 5 pick in return and create enough cap space to chase a marquee free agent.

There are a number of reasons teams end up not moving disgruntled stars — just look at how the Kyrie Irving buzz has stalled — and Aldridge might be one of the most complicated cases around. That’s both bad and good.

Aldridge has found himself amid one of the NBA’s great shifts, and the power forward position is its fault line. It’s not just that traditional fours are having to adapt; many are becoming obsolete as teams seek greater spacing and lineup flexibility. At 32 and still a borderline All-Star, it doesn’t make sense for Aldridge to completely reinvent his game, but it’s also hard to imagine most teams being able to plug and play a mid-to-high-volume starter who prefers to wade in the lowest-efficiency parts of the floor.

It’s serendipitous that, in this continental shake-up, he ended up in San Antonio’s Land Before Time system, which adapted its offense around his mid-range and post-up game (Aldridge was fourth in the league last year in post-up field-goal attempts per game) and found great success in doing so. Yes, the Spurs led the NBA in three-point percentage last year, but they still ranked just 24th in three-point rate. And that’s fine, because…

The Spurs have been pretty good the last two years

Spurs GM R.C. Buford made the point when being asked about not moving Aldridge.

#Spurs RC Buford on Lamarcus Aldridge rumors: Happy w/group, but if we can make it better,well do it. Won 128 gms in 2 yrs,but its about fit pic.twitter.com/JBMTG4t019

The team has not only won 128 games over two seasons, including a franchise-best 67 wins in 2015-16, but also been no worse than seventh in offensive or defensive rating both years. That’s very good, and having LaMarcus Aldridge play second banana is a big part of that, even with the subtle mention of “fit” at the end.

Gregg Popovich still looks to carve an identity around defense, and it’s that side of the ball where Aldridge remains underrated. Despite relatively low shot-block numbers, he’s an elite defender around the rim and has finished 9th and 17th among all players in defensive win shares over the last two seasons.

That said, fit matters, and both sides apparently saw some potentially greener grass just a few weeks ago. One of the next hurdles, then, is Aldridge’s contract.

An expiring deal is one thing — it gives teams a short-term window to capitalize on on-court value before making use of the cap space left behind. Two- and three-year contracts offer the same kind of visibility for teams to work around. But Aldridge’s option (to either hit the market in 2018 or remain with the Spurs on a $22.3 million salary) muddies the water, especially with a player who may be a tough fit for a team without the ability to work their system around him.

How many teams want to win now?

That brings us to the final point. The league’s short-term future is best viewed through the lens of the Warriors’ hegemony. Anything can happen, sure, but it certainly feels like only the injury bug can challenge them as long their dominant core remains intact. Aging superstars want to win now regardless — we saw that with Chris Paul forcing his way to Houston and we could see it next year with LeBron James doing the same to SA next year. GMs, though? Most would be wise to wait out the storm another season or two and re-examine the lay of the land.

Know who does want to win now (and always), though? The Spurs. And they still stand to be one of the best teams in the league with Aldridge in black and silver next year.