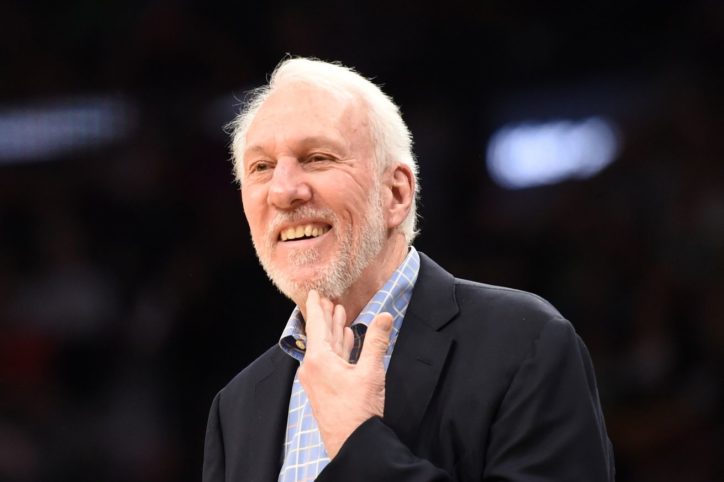 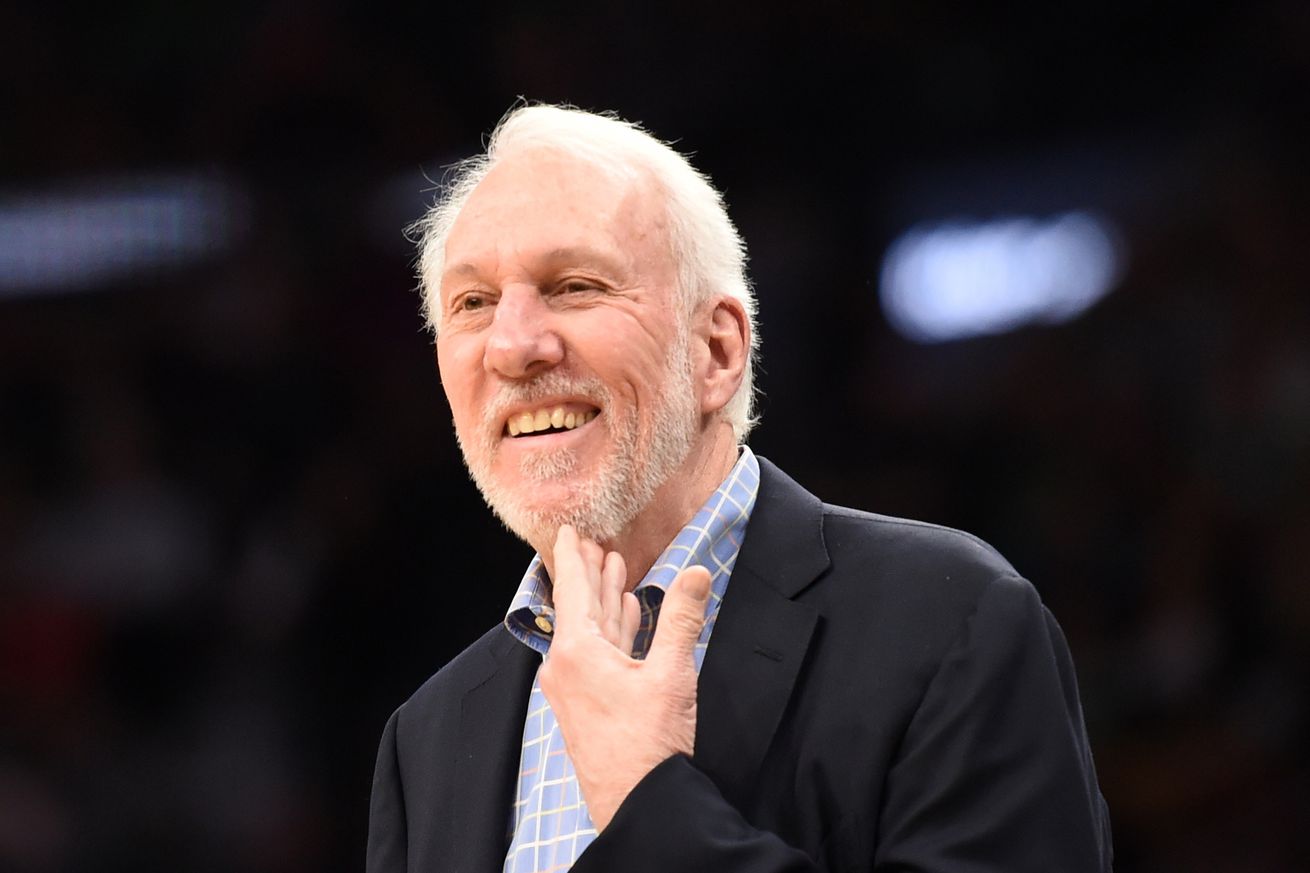 The regular season is almost over. In this week’s round-table the PtR staff takes a look back at the year’s best and worst moments and tries to figure out what’s next.

The regular season is almost over! It seems like it was just yesterday when the Spurs made their debut against the Timberwolves and now they are getting ready to start the playoffs.

It’s been a wild ride. San Antonio came into the season with plenty of doubts after a momentous summer. The team looked alternatively great and disastrous before largely settling into the solid shape that allowed it to make it to the postseason despite the tough blow of Dejounte Murray’s preseason injury. The patience of fans was tested, but ultimately rewarded by a 22nd consecutive trip to the playoffs.

Now that we are at the end of the regular season, PtR contributors Marilyn Dubinski, Mark Barrington, Bruno Passos, and Jesus Gomez join Editor-in-Chief J.R. Wilco to wrap up the wild past six months of Spurs basketball.

How would you describe the season, in one word?

Marilyn Dubinski: Promising. Even before Dejounte Murray’s injury the Spurs were not expected to even meet last season’s win total, and worst case now they have matched it. Many young players got valuable experience that could pay off big time down the road, and despite the huge roster turnover and injuries, the Spurs are still heading to the playoffs in a stacked Western Conference. How many franchises can claim these results in their biggest rebuilding season in over two decades?

Mark Barrington: Satisfying. I didn’t expect much from them this year after the loss of Murray with this many new players, and the development of players and teamwork has been really inspirational. I’m really looking forward to adding a veteran contributor next year and becoming a title contender in 2020.

Bruno Passos: Unpredictable. In contrast with the past 20+ years, there’s been so much variance in performance night to night as a result of an uncharacteristically shaky defense and a number of new parts getting integrated at once. It’s all worked towards a positive in the aggregate, though.

Jesus Gomez: Fun. It didn’t start out like it. At first, I think the fanbase struggled to cope with the reality that the team simply wasn’t a contender anymore, which was tough. There were some dark moments along the way — the Wolves loss almost broke me — but ultimately it became fun to watch this iteration of the Spurs try to figure it out. I think after Kawhi’s visit the dark cloud that was looming over the franchise was lifted and at least personally I started to enjoy the ride, as bumpy as it was at times.

J.R. Wilco: Puzzlearnsitional: a puzzle wrapped in a learning transitional time. The season was frustrating for all of the awful teams that the Spurs lost to, and yet here they are in a position to improve on 2018’s 47-win season. The team is learning how to play as a unit while finally transitioning from the last portion of the Big Three era. It’s exciting that we can see the future structure of the team, and look forward to them playing together long enough to develop the beginnings of the chemistry that Manu talked about on the night his jersey was retired.

What was the most pleasant surprise of the season? (Could be a player, stat, result, etc.)

Dubinski: The development (or revelation?) of Derrick White on both ends of the court. I initially saw him as a place-holder starter for this season with a future as a poor man’s Manu Ginobili: a 6th man who would lead the bench. It turns out he’s a top-tier defender with a serious offensive game, and I stand by the assertion that he has already passed Danny Green as a player (who admittedly is having a career year in Toronto). There could be some interesting battles for starting SG between him and Lonnie Walker IV down the line, so this promises to be fun. Runner-up surprise is Bryn Forbes.

Barrington: Derrick White. I thought his ceiling was going to be competent backup, and now I see him as possibly developing into a borderline all star as soon as next season.

Passos: On an individual basis, it’s been White, but the near-elite efficiency of the offense — whose makeup was criticized heavily through the beginning of the season for being built around mid-rangers — has been really fun to see.

Gomez: The development of some of the young players — Bryn Forbes is an NBA player! Derrick White is a two-way force! Jakob Poelt was not just a throw in! — has been fun to track. If I have to pick just one pleasant surprise, however, I’ll go with how well the culture of the team remaining strong in the first year without any of the Big Three around. Patty Mills and Rudy Gay deserve a lot of credit for their leadership. Obviously so does Pop. It’s just been great to see that the Spurs still have a great locker room filled with unselfish guys that root for each other’s success.

Wilco: While Forbes surprised me, and the offense (after last season’s struggle to score) certainly did as well, the most pleasant surprise was how quickly I fell in love with Derrick White. He absolutely maximizes the physical talents he has by thinking his way around the court and I am beyond looking forward to watching his development through the playoffs and into next season.

What was the biggest disappointment of the season? (Could be a player, stat, result, etc.)

Dubinski: The Spurs maddening’ habit of playing down to lottery teams and the number of losses it generated. A few less listless efforts against teams like the Bulls and Knicks, a little more respect shown to teams outside of the playoff hunt, and the Spurs are looking at home-court advantage and a higher postseason ceiling, especially considering their well-documented road struggles.

Barrington: I think it was the loss to the Knicks, but it could have been any one of a number of losses to bad teams. As good as the Spurs were at times this year, they really had their asses handed to them by a number of terrible teams, just seemingly not being ready for young players who played with maximum effort, and not adjusting to the pace of the game.

Passos: The ending to the Raptors game was probably the emotional low point, in my mind. I found myself pretty invested in DeRozan’s revenge game, one in which he was performing so well, only to see him fall — literally — before Kawhi Leonard and have the game snatched away from him in the closing seconds.

Gomez: That Wolves game I mentioned early was infuriating. The loss to the Raptors was heartbreaking. I guess in a more general sense the lapses in focus and sometimes even effort in some games was the most disappointing thing about this team. It’s understandable, since it was a transitional year, but at times it was frustrating to see the Spurs underperform.

Wilco: The team’s inconsistency was my biggest disappointment. They would play up to an elite opponent and then lose big to a bottom feeder. They’d get blown out by a contender and then require buzzer-beating heroics to stave off a middling team. Of all the things I knew I was taking for granted in the seasons of excellence Tim and Manu and Tony gave us, it’s the consistency that I didn’t realize I didn’t fully appreciate. (That and the lack of beautiful game plays from the starting unit.)

What was your favorite moment of the season? (Moment, game, stretch, etc)

Dubinski: I’m pretty confident I was smiling throughout that entire January beat-down of the Raptors in Kawhi Leonard’s return to San Antonio. It was by far the most satisfying and anticipated win of the season, and after that it felt like we could finally shut the door on him as a topic and what could arguably be considered the darkest chapter in Spurs history. The only thing that tainted it a bit was the incessant booing. While I was never one who was on the booing bandwagon, I understood that some people needed to get it out of their system. That being said, never letting off for the entire game was overkill. It should have been over after his first possession.

Barrington: It was probably the March 9 win against the Warriors that capped off the 9-game winning streak. That was having me believe that the Spurs were actually as good as anyone this season, but the loss to the Miami Heat brought my expectations back to earth as I realized that the Silver and Black were still beset with inconsistent effort.

Passos: It was a treat to be in the building for the 154-147 win over the Thunder. It was one of many closely contested wins on the season, but Aldridge’s career night and the number of big shots hit throughout lent a unique atmosphere to a game that you rarely experience in January.

Gomez: The aftermath of the win against the Raptors was sweet. Going into the matchup I was anxious to see if we were going to get more information as to what cause the breakup between Kawhi and the Spurs. After it, I was fine with not knowing and moving on. The January stretch was great, too. Pop is probably not going to win CoY but the way he tweaked the defense and essentially installed a separate offense for the bench in order to mask the fundamental issues with the roster was — here’s that word again — fun to watch.

Wilco: My favorite moment was the trouncing the Spurs put on the Raptors in San Antonio. But since an entire game is hardly a moment, then I’ll choose this one:

What are your hopes for the playoffs?

Dubinski: A match-up with the Nuggets, and the Spurs showing the level of play against them from their first 3 meetings against them (not the last one). Anything could happen from there, and if they take the series to 6 or 7 games I’ll be very proud of them. If they somehow pull off the upset I’ll be ecstatic, even if I wouldn’t count it as their most surprising playoffs upset ever.

Barrington: Extending the first round series to six games, and a nice long summer focused on rehabbing injuries and developing players. If they somehow get past the Nuggets (or whoever they play in the first round), then I’ll change my level of expectations.

Passos: A first-round win is an appropriate if slightly-aspirational goal to give this team. The season’s already been a success in my book, but it could do with one more milestone for good measure.

Gomez: Getting past the first round would be amazing, but I don’t see that happening. So I’m hoping that they can make it a series and we get to see good minutes from the stars and the young guys, especially White and Bertans in their first postseason as key contributors.

Wilco: If they can make the second round, I’ll be ecstatic. If they push the first round to six games, I’ll be pleased. If they get Pop the game that pushes him to #1 combined all time wins for an NBA coach, I’ll be satisfied.