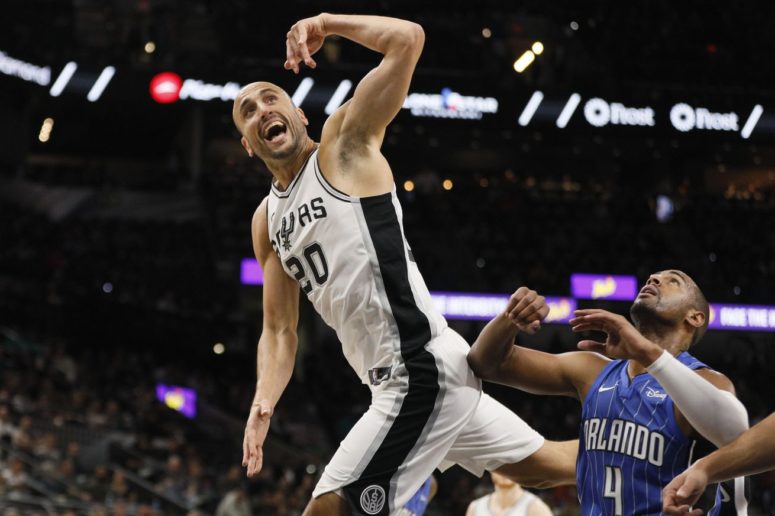 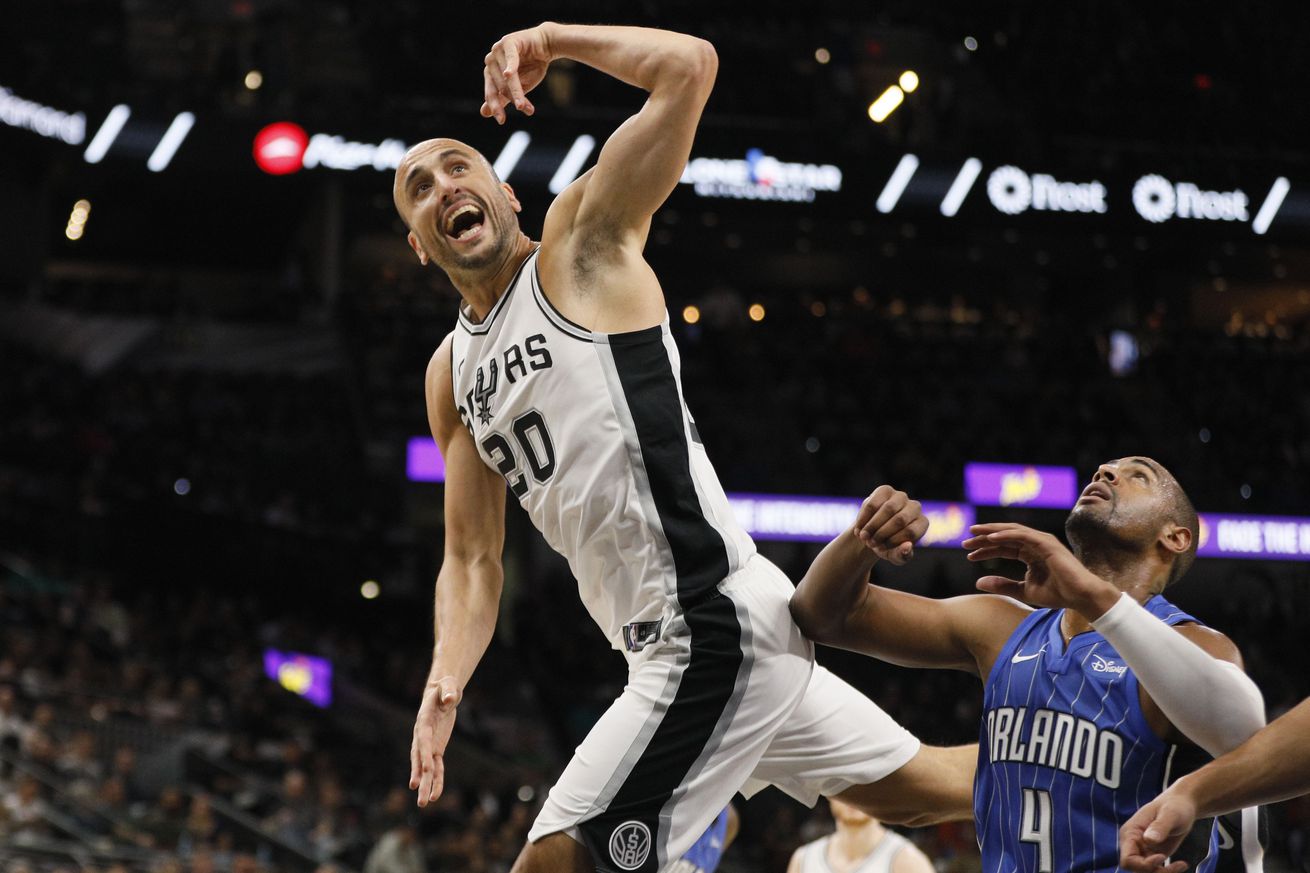 The regular season is right around the corner, making this the perfect time for some bold predictions.

1) Oddsmakers set the Spurs‘ over/under win total at 54.5. What are you taking, and why?

Mark Barrington: Over, but not by a lot. The Spurs improved in the off-season, but so did the other contenders in the west. I see them in the 4th position with 56-58 wins.

Marilyn Dubinski: I’m taking the over. Excluding the lockouts and 1997, the Spurs have only finished with 54 wins or less three times under Pop, and those were all injury-riddled seasons. I just don’t see that changing this year. This team already feels more talented and cohesive than last year’s 61-win team, and a healthier, more engaged LaMarcus Aldridge can only help.

Jesus Gomez: It’s tempting to take the under. We know Pop will rest everyone on a winnable game or two and the defense will take the night off against a terrible opponent, likely from the East. I’m still taking the over. There’s enough talent and depth on this roster to win at least 55 games, as long as Kawhi suits up for 70+ games. This is not the year in which the Spurs will fade.

Bruno Passos: The Spurs have beaten their Vegas lines in four out of the past five years. More impressive than that, though: they’ve bested the line by a combined 49 wins since 2006. I have no reason to think this group won’t keep that tradition going.

J.R. Wilco: Over, as long as Kawhi plays more three quarters of the games. If we assume a healthy Kawhi, I’d say they could even make a run for 60 games for the third straight season.

2) Almost every season offers a new player who comes out of nowhere to become an important contributor. Who’s your 2017-18 breakout Spur?

Mark: I’m going to go with Kyle Anderson. He’s not actually coming from nowhere, but he’s never gotten consistent minutes. His Swiss Army skill set will make him a valuable backup for the 2, 3, and 4. He will win games for the Spurs this year.

Marilyn: Joffrey Lauvergne seems like the obvious answer, so I’m going to take another path and go with Brandon Paul. I’ve liked this kid from the moment they signed him. He has the right attitude and work ethic to be a Spur. He’s athletic, plays good defense, and he can shoot from outside. He may not bring the house down with Jonathon Simmons-level highlights, but he could easily be a more solid player in the Spurs’ system.

Jesus: The Tyrant King Joffrey is going to be that “the Spurs have done it again” guy for the national media. He’s going to shatter his career-best numbers, in all likelihood. The actual breakout Spur, though, is probably going to be my lanky Latvian son, Davis Bertans. I can see him shooting over 40 percent on three-pointers in a rotation role. At least that’s what I’m hoping for, because without a killer three-point shooting forward, those small-ball units we are all so excited about might struggle.

Bruno: The safest bet based on what we’ve seen in preseason (and who doesn’t like to get carried away with preseason performances?) is third-year journeyman Joffrey Lauvergne. The opportunity is there for him as the third and final big man on the roster but, even better, he’s looked like the type of high-IQ, multi-skilled player who can flourish in the Spurs system. Lauvergne doesn’t have the same complete game as David Lee (who finished fourth on the team in win shares last season), but there’s a chance he makes a similar impact coming off the bench.

J.R.: I’m 100% backwards from Jesus, I’d love nothing more than to see Bertans break out, but I think his defense is still a year away. But Lauvergne is definitely going to surpass expectations this year. And I think he’ll surpass them even after they’re adjusted for the fact that no one on the national scene expects anything at all from him now. He just affects possessions in so many positive ways: he’s got a serious motor, never takes a play off, crashes the boards, positions himself well, and sees the cracks in a defense at a single glance. I’m 100% on the JoLo train.

3) Where does Kawhi Leonard finish in MVP voting?

Mark Barrington: First. As if anyone else had a chance.

Marilyn: Second. A lot of his previous competition now has even more superstar divide votes, and I think he should win if he leads a Spurs squad that many (but not me) think took a step back this summer to another second seed. However, I can’t help but think LeBron James will get one last hurrah from the voters if he leads the Cavs to the first seed past Kyrie Irving’s Celtics, especially if the GM survey is any indication. Also the media seems so obsessed with stats that I can see them shying away from Kawhi if his scoring averaging doesn’t go up for the first time in his career, even if it’s because he became a better facilitator.

Jesus: First! Again, I’m assuming he plays at least 70 games. The quad injury is a little concerning and it might prevent him from taking the league by storm early, hurting his chances. But if he regains his level soon enough, he’s a good bet to take home the award. Other candidates will either split the vote or will have to battle voter fatigue.

Bruno: I’m going to assume Leonard’s injury isn’t serious — because I have no reason to assume otherwise just yet — and say first. The narrative will be there for Leonard as the lone superstar on a very good, potentially great, team, in a season otherwise defined by superteams. If he can at all improve upon his play from last year, I think this is his award to lose.

J.R.: This year’s MVP award is Kawhi’s to lose — or technically, it’s his quadriceps tendon’s award to lose.

4) Who’s the Spurs’ starting point guard at the end of the season?

Mark: Tony Parker. But Murray will play a lot of minutes.

Marilyn: Tony Parker. Unless Dejounte Murray blows everyone away and creates unbreakable chemistry with the starters (which is possible), I can see Pop going back to Parker if he’s healthy and in good form. Pop has a knack for trusting his old guard more, and considering how well Parker performed in last year’s playoffs it wouldn’t be surprising to see him get one last chance to prove he still has what it takes.

Jesus: Tony Parker. I could absolutely make a case for Patty Mills. He’s a better shooter and defender. But if Tony returns to form, his ability to create for others and be a floor manager will be hugely important with the starters. Mills is a better fit with the bench, as well. Next season Tony will likely be a backup when he re-signs, but this year, I think he’s still the Spurs’ starting point guard in the playoffs.

Bruno: This is a tough one to speculate on, since it requires you to factor Murray’s development and Parker’s return to form, while still assuming Mills is forever locked into a backup role. Just to be a contrarian voice, I’ll say it’s Murray, whose defensive talents shine while his poise on offense takes a big step.

J.R.: Assuming Parker returns to a reasonable facsimile of his 2016-17 self, and Murray doesn’t suddenly raise his game several levels, it’ll be Parker. He understands the game so well, and knows how to set up every offense regardless of who he’s playing with. Murray would have to become a near Kawhi-level defender this year to make taking him out of the starting lineup a difficult decision.

5) How far does this team go in the playoffs?

Mark: Second round. I don’t think they can get past the star-laden rosters of OKC or Houston, and those two teams will be fighting for second place in the west. I would be glad to be proven wrong, but I don’t think a team with one all star can beat a team with three or more in a seven game series. The thing that could change this prediction is if LaMarcus Aldridge starts playing like an all star. If that happens, it changes everything.

Marilyn: Common sense says Western Conference Finals. Despite the hype surrounding the new superteams, OKC and Houston don’t scare me enough to think the Spurs will lose to either them in the second round. The Warriors still present a challenge that will require near-perfection to overcome, but I do think with more shooters and a more versatile roster the Spurs are better prepared to challenge them this season. If everyone is healthy, anything could happen.

Jesus: A second round exit is the safest bet, but it will depend on the seeding. I think San Antonio can beat any Western team in the semis, except for the Warriors and, possibly, the Rockets. If they finish with the second best record and the Thunder take out Houston, the conference finals are not out of the question.

Bruno: Western Conference Finals. Fans will get the full-health matchup against the Warriors they all deserved last postseason, but the smart money says the Spurs will once again fall short.

J.R.: I think that as long as they have the 2 or 3 seed, that they have an excellent chance of making the WCF. The Rockets have Chris Paul, who has a history of his body betraying him during the end of his playoff runs, and until OKC has shown that they no longer struggle with identity problems and the team dysfunction, I can’t place them over the Spurs.