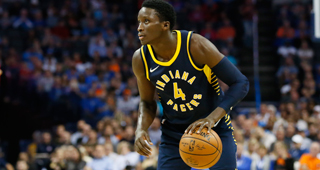 Victor Oladipo was traded by the Indiana Pacers to the Houston Rockets for Caris LeVert as part of the broader James Harden trade.

Oladipo will be an unrestricted free agent this offseason and sources tell Kevin O’Connor of The Ringer that he still hopes to eventually end up with the Miami Heat.

Oladipo had reportedly wanted a trade from the Pacers for some time.

Houston could still trade Oladipo before the trade deadline.