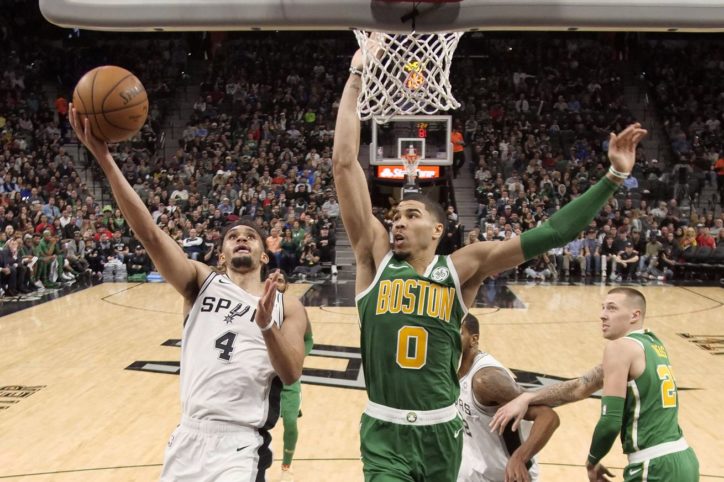 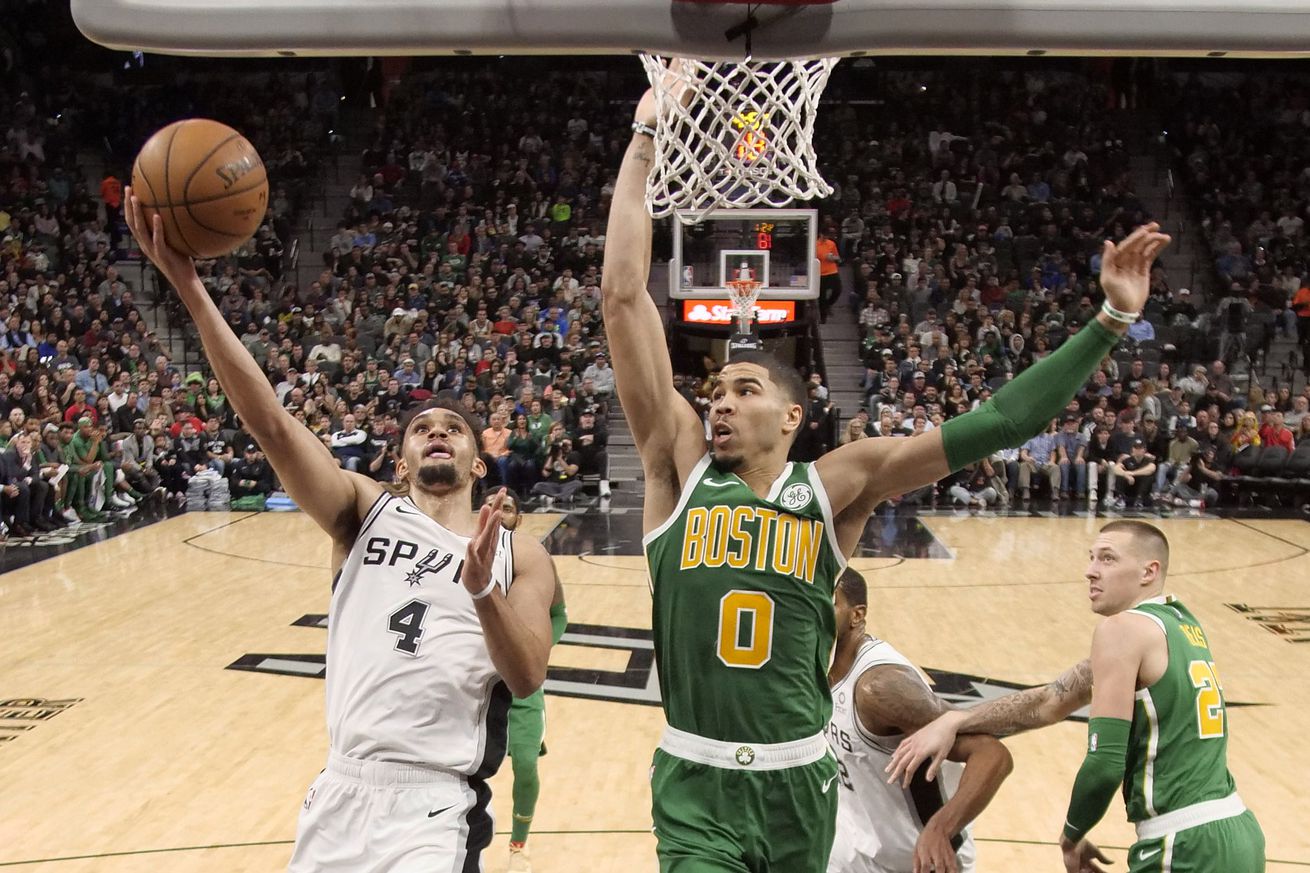 The Spurs take control in the third quarter and put away the Celtics in 2018’s final game.

Tonight’s game was a microcosm of the Spurs’ season so far this year: the good guys started slowly and ramped up their effort and execution as the game wore on, with Derrick White emerging as the main facilitator for the Spurs offense, and their most consistent defender. The Spurs started with good effort and activity but fell behind because of poor execution on defense and bad shooting. But after halftime, they got their act together and found themselves. It wasn’t a perfect half of basketball, but it was really, really good, almost putting the game away with a 46 point third quarter, and holding off a late Celtics rally with timely scoring and hitting their free throws to win the 120-111.

The Spurs started the game with a huge lineup, with LaMarcus Aldridge and Jakob Poeltl towering over Al Horford and Marcus Morris in the paint. It seemed like a good strategy at first, as LaMarcus got to the rim time and time again, but he missed a ton of point blank shots as the Celtics, not exactly burning up the nets themselves, rushed to a late 23-14 lead with Jaylen Brown hitting crucial shots for the guys in green. Bryn Forbes hit a late triple to cut the Celts lead to 6 as they led 23-17 after one quarter.

The problem with the Spurs big lineup was that the Celtics had a quickness advantage, and they cashed in as they pushed their lead into double digits for most of the second quarter. The Spurs bench provided some energy late as Davis Bertans hit some big shots while Derrick White made key stops on the other end. LaMarcus continued to bang, and his shots finally began to fall as the Spurs equaled the Celtics in the second quarter, and trailed 52-46 at the half.

The team that came out of the locker room after the half looked like a different team than the one that took the court at 6:00 pm. The execution was flawless, the rotations were on point, and most of all, they were hitting their shots. Derrick White showed he is more than just a plucky defender, driving to the basket and either getting the baskets or dishing to the open man. DeMar DeRozan began to work his way out of his first half slump and suddenly the Spurs were on a 16-0 scoring run. After scoring 46 points in the first half, the Silver and Black burned up the nets for 46 in the third, with the only negative being open shots for Terry Rozier, who hit three triples in a row to keep the Celtics from being completely blown out in the third. Nevertheless, the Spurs led 92-82 after three. and looked like the better team.

Our 46 points in the third quarter was our highest scoring quarter since 1993!#GoSpursGo pic.twitter.com/1AnKUr0ibm

The Celtics and Spurs played a pretty even fourth quarter, but it seemed that every time that Boston began to cut into the lead, Davis Bertans was there with a clutch shot to keep the game out of reach for them. They cut the lead to single digits late, but unlike the Nuggets game, the Spurs kept hitting their free throws, and the Celtics just couldn’t get over the hump as the Spurs played keep away over the last few minutes and sealed the win 120-111.

The Spurs have a couple of days off, but on Thursday, January 3, at 7:00 the Toronto Raptors come to town. The best player on the Raptors is a guy you might have heard of before, and he’s playing really well this year. But enough about Danny Green, they also have another former Spur on their team who I hear will be a really good player some day if he gets over his attitude issues. I suspect he will be really hard to stop IF he plays on Thursday. I’ll be watching, and so will you, probably. Good night, and Happy New Year to all. Be safe, and use a designated driver if you’re drinking alcoholic beverages. Happy 2019 and Go Spurs Go!