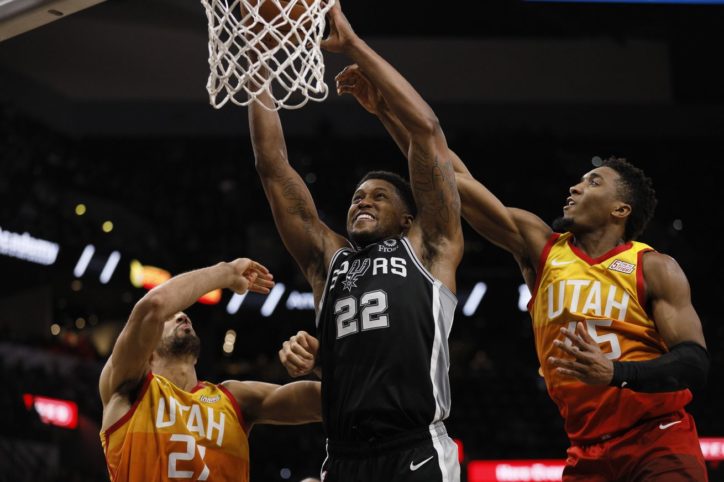 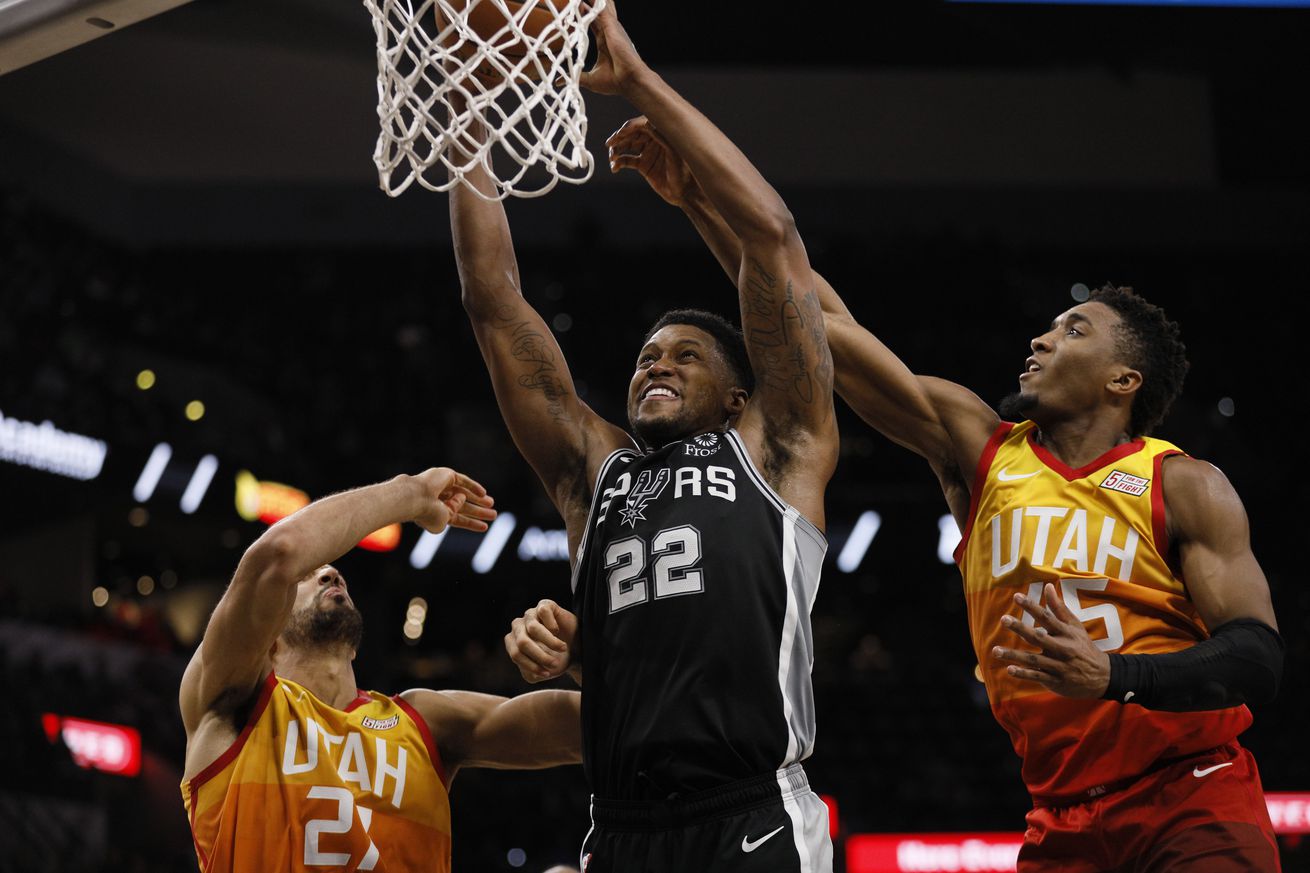 They may not shoot many three-pointers, but San Antonio showed they’re acquainted with the art of the slam.

In a shocking turn of events, the Spurs played their second good game in a row against the Jazz on Sunday evening. With effort and discipline on both sides of the ball, they looked like a completely different team than the indifferent bunch that got blown out in Utah just four days prior. On the offensive end, that manifested itself in some easy buckets, including 5 dunks, which is tied for their most in one game all season.

The easiest of those came after a timeout with a little over 9 minutes to go in the 3rd quarter.

Derrick White brings the ball up the right side of the court, then veers across a pretend screen from Rudy Gay to just above the left wing. While he’s moving, Bryn Forbes sets up to screen Joe Ingles under the basket in what looks like a typical Spurs attempt to get DeMar DeRozan good post position on the left block. That’s just misdirection, though.

Bryn cuts up to the top of the key between Rudy and LaMarcus Aldridge, who shut the elevator doors on Ricky Rubio. The threat of Bryn’s shooting is strong enough that Favors comes off Rudy to prevent the shot. Rubio gets around the screen, only to leave Rudy Gobert alone to deal with both Rudy and LaMarcus.

Bryn could have gotten the shot off, though it would have been well contested. Instead, with a quick read of the situation, Bryn sees an open driving lane and a tactical advantage. Rubio’s closing so quickly that Bryn doesn’t even need to give a real shot fake, just settling into the beginning of his shooting form is enough to get both Rubio and Favors to over-commit.

With the defense scrambling, Bryn drives to his left, around Rubio and towards the rim. LaMarcus hangs at the free throw line, but Rudy has already dropped down to the right block. Gobert plays the space as well as he can, but the alley-oop is right on target and Rudy throws it home.

The Spurs’ other 4 dunks were more about effort and improvisation.

You may have noticed that the two fourth quarter dunks occurred in front of the Spurs’ bench and you may also have noticed quite a bit of celebration in the background. If not, take another look.

There’s simply no question of who the most outstanding performer in these celebrations is. Look at Drew Eubanks’ timing and anticipation. He is quite literally rising up off the bench at the same time Derrick and Rudy are jumping for their dunks. That’s commitment, awareness and execution. What a top-notch end-of-the-bench guy performance.

Not all of the Spurs’ looks at the rim were dunks, though. They also used some simple but effective actions to get the ball to their bigs on a roll with no help defense.

The Spurs did two things to make this look so easy. The first is the weakside action that occupies Donovan Mitchell and Royce O’Neal, meaning no tag on the roll man. It also puts Rudy Gay, who’s shooting 52% on catch and shoot threes, in the corner, making Mitchell obviously think twice about digging down into the paint.

The second is Patty Mills’ little shot fake that gets Favors to lift just enough to open a window for the bounce pass to Jakob Poeltl.

This is a pick and roll with an empty strong side corner, which we’ve discussed before. Bryn clears out to the weakside while Rudy and Marco Belinelli switch positions, putting Rudy in the corner again. Crowder recognizes the action and indicates that Rubio should help on the roll, but he doesn’t. The typical response to this action is to have the low man on the weakside, Crowder in this case, help on the rolling big. But the movement jumbles up the defensive assignments just enough that nobody does and LaMarcus finishes the left-handed layup through contact.

The Spurs didn’t get to the rim often in this game, taking just 21.7% of their attempts within 4 feet, per Cleaning the Glass. But they converted those looks at high rate, making 68.4%. Shooting well at the rim has been a much better predictor of team success for the Spurs so far this year than number of attempts, and that held in this contest. If they can continue to generate looks this good, that should be something they can do on a regular basis.