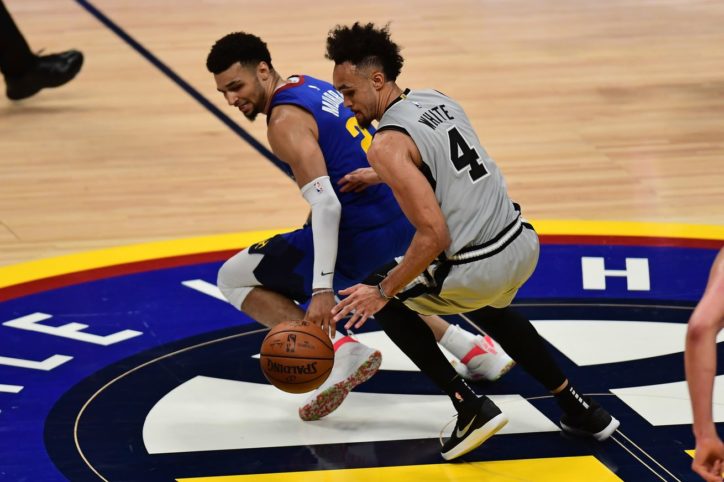 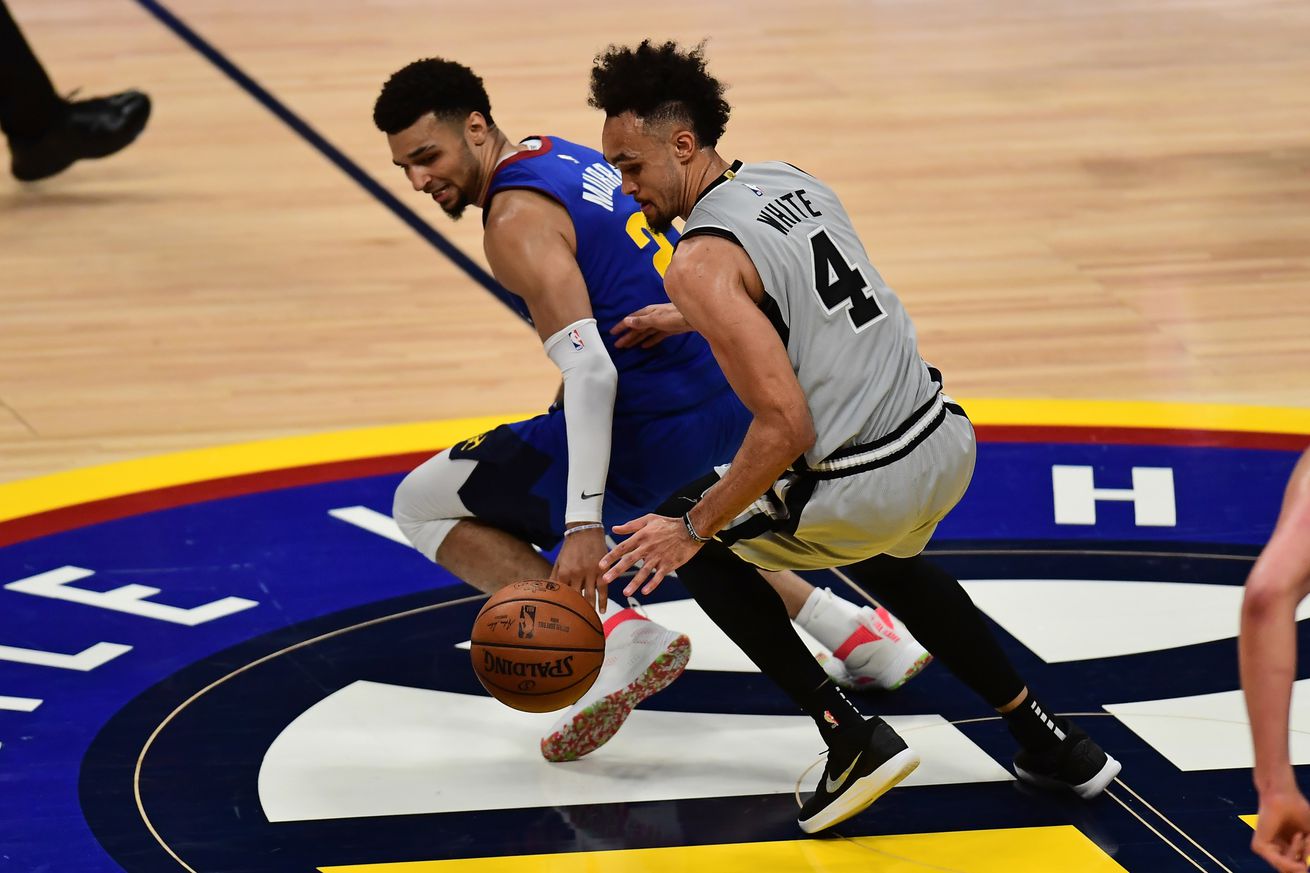 San Antonio took the lead for good toward the end of the first quarter, but the outcome was in doubt up to the final possession.

The best reason to believe the Spurs have a chance in this playoff series against the 54-win Nuggets turned out to be the key to their game 1 victory. This Spurs’ team is poised beyond reason. Whether it stems from their legendary coach, who has now won more games than any other coach in league history, the calm determination of their two stars, or the franchise’s prized “corporate knowledge,” it seems every single player is ready for their close up.

Yet the most important player on the floor for much of the night, on either team, is in just his 2nd year in the league, and his 1st as a starter. Time and again, Derrick White calmly asserted control over the chaos.

As DeMar DeRozan and LaMarcus Aldridge struggled with their shots for much of the night, due in large part to the Nuggets’ aggressive and effective scheme, Derrick took what was available, orchestrating an offensive attack that never let up.

Aside from 2 early fouls that forced him to the bench for all but 2:22 of the 1st quarter, Derrick played one of his best games of the season. His 16 points on 7/10 shooting were critical, especially on a night where DeMar and LaMarcus combined to shoot just 33.3% from the field, as was his unrelenting defense on the Nuggets’ ball handlers.

But the two most important plays of the game saw Derrick rising to the moment when, by all reasonable expectations, he should have been barely holding it together. After 3 minutes of increasingly sloppy play by both teams all over the court, Derrick found himself with the ball heading up court in transition midway through the 3rd quarter. He hesitated, yes, but only to open up a lane to the rim before detonating on Paul Millsap.

Then there he was again, with seconds left in the game, all over Jamal Murray bringing the ball up with a chance to tie. He fought over a screen in the backcourt instead of going under, putting himself in position to capitalize on Murray’s mishandling of the ball. That steal, and White’s ensuing free throws, sealed the game.

Derrick wasn’t the only young Spur to show up in big moments, either. Bryn Forbes, especially, came through, hitting 6 of his 9 shots for 15 points. They weren’t all easy looks, though he did capitalize on some nice play calling for open threes. He also hit several wrong-footed runners and even knocked down a driving, spinning fade away for 2 points as the shot clock was expiring.

And even on a tough shooting night, both DeMar and LaMarcus found ways to contribute. DeMar’s 12 rebounds and 6 assists, on top of his team-high 18 points, were critical, as were LaMarcus’ 5 offensive rebounds and tough defense on Jokic.

That, too, is a sign of the team’s discipline and self control. The Nuggets’ physical play in the post could have easily taken either star out of the game. But neither gave in, choosing instead to fight on every possession, making whatever contributions they could.

With both of their old-reliables struggling, the rest of the team pitched in to respond each time the Nuggets got close, hitting contested mid range jumpers, off-balance floaters, and finishing through contact over and over.

That the Spurs made so many difficult shots, and that the Nuggets shot so poorly from deep, hitting just 6 of their 28 attempts, will certainly make it easy for the Nuggets to believe they can still dominate the series. But bad bounces happen and a seven game series is too short for what ifs.

The Spurs now hold a 1-0 lead and have seized home court advantage from the best home team in the NBA. They are undoubtedly in for hard fought series. But, as they have all season, the Spurs will keep moving forward, poised and implacable.

Derrick White is a bad man

When asked about Derrick’s 3rd quarter posterization of Paul Millsap in his postgame interview, DeMar said Derrick has “sneaky bounce,” though it’s unlikely he’ll be able to sneak up on anybody again anytime soon.

Both Derrick and LaMarcus struggled with foul trouble in the 1st half, with neither playing more than 14 minutes. That the Spurs were somehow able to overcome their absence to take an 8 point lead into the break was as surprising as it was impressive.

While the Nuggets only made 21.5% of their threes, the Spurs managed to make 46.7%. That may seem like a huge disparity, but the Spurs only took 15 attempts, meaning they made just 1 more 3 than their opponents.

High accuracy on few attempts has been the Spurs’ recipe for success all season, though they shot incredibly poorly against the Nuggets in their season series. The Nuggets will almost certainly shoot better than this in the teams’ remaining games, so the Spurs’ will need to continue to hit from deep.

Coach Popovich has now won 1,413 games, more than any other coach in history. He’s done it over the course of 3 decades, through some of the most dramatic changes in style of play the league has ever seen. That he set the record in a game like this, in which many experts predicted the Spurs would have no chance, is a fitting testament to his legacy.