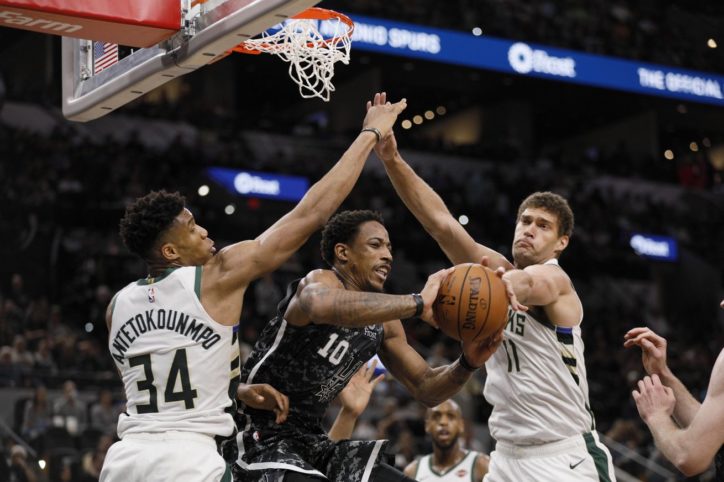 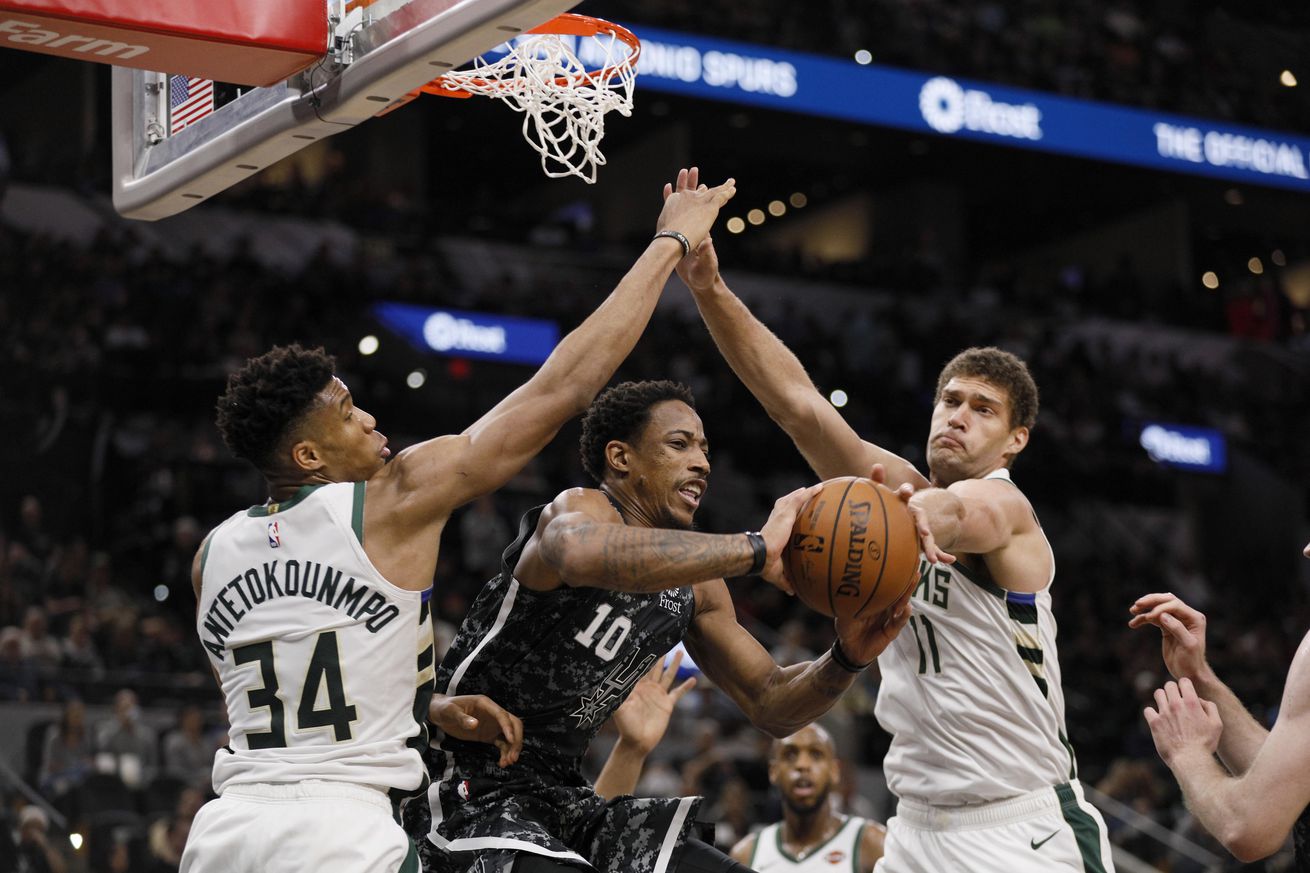 San Antonio is hoping their stars are good enough to carry an offensively-challenged stating unit.

The Spurs have made a late season tweak to their starting lineup, bringing Rudy Gay off the bench in favor of Jakob Poeltl. They will surely adjust when the matchups dictate that it’s a good idea to do so, but they seem comfortable playing two bigs together to start games going forward.

In just 10 games, the adjustment has had visible repercussions on team defense, which we have already explored. Yet it also has significant ramifications on offense that are arguably as important and will determine if the tweak is ultimately successful or not.

The move is currently being perceived as a defensively-oriented one, with Poeltl’s insertion as the real reason for it while Rudy Gay’s shift to the bench is an inevitable byproduct of the effort to add more size inside. Yet the previous starting lineup’s problem was never defense. The Bryn Forbes, Derrick White, DeMar DeRozan, Rudy Gay, LaMarcus Aldridge unit allows a stellar 103.9 points per 100 possessions, a mark that would rank first in the league and is only marginally worse than the season average of the one that includes Poeltl. That group struggled on the road, but not as much as the new starting lineup has on the aggregate. There was little evidence that suggested starting Poeltl would actually improve the defense and plenty that suggested starting Gay was not a problem on that end.

And yet, as mentioned, the tweak has worked so far, at least on one end. The new starting lineup over the past 10 games has been as good as the old one was on defense while having more size up front, just like Gregg Popovich prefers. Offensively, however, it has been even worse than the starting lineup that included Rudy Gay at power forward, which averaged just 103.6 points per possessions, a meager number that would have ranked last in the league. Something about the old starting unit’s offense was not working, and something about the new one’s doesn’t work either. As long as the defense remains elite and other five-man configurations featuring bench players score well, it’s not a huge issue, but it’s one the Spurs should try to fix anyway.

It seems like the obvious issue of bad spacing — that unit has just one plus shooter and takes just 15 threes per 48 minutes — is having a huge negative impact in the rest of the attack. The new starting unit gets a bigger percentage of its points from mid-range than in the paint, despite its size. It barely attempts free throws, so it can’t really make up for it from the line. The only easy points come after opponent turnovers and on putbacks. The lack of efficient scoring combined with a snail’s pace that limits offensive possessions makes every shot important. If the stars are hitting their tough mid-rangers, then the unit will do fine. The best example might be the Portland game, in which DeRozan and Aldridge scored 21 of the team’s 23 first quarter points, but there were plenty of first and third quarters during the streak in which those two simply carried the offense. When they struggle, the offense typically does as well.

Asking your stars to do most of the scoring on an otherwise defensively-oriented unit is not a novel concept, but keep in mind that the Spurs are asking DeRozan and Aldridge to routine combine for double digit points in the first and third quarters on a poorly spaced floor featuring only one plus shooter. Derrick White can help shoulder the burden a bit, but when he’s shared the court with Aldridge and DeRozan he has traditionally gone into facilitator mode, with his assists per minute going up significantly, but his points decreasing equally notably. He’s been more assertive since he hasn’t had to also share touches with Rudy Gay, but he’s still not a reliable third scorer. Bryn Forbes and Poeltl, meanwhile, are mostly used as low usage finishers, the role they are better-suited to serve. It’s tricky to find complementary scoring in that unit which doesn’t bode well for games in which one of the stars struggles.

Despite those issues it’s understandably that Pop has tried this new unit. To be fair, there have been positives about the tweak. As mentioned, the defense has remained stout while taking the form Pop likes the most. Guarding three-pointers will be a big issue, but Poeltl’s help defense might prove to be a worthy trade-off for the quickness and switchability the team has lost. On offense the new lineup has turned the ball over even less frequently than the extremely turnover-averse Spurs as a whole, which has to be comforting for the coaching staff. There’s also a very convincing case to be made that the starting unit simply can’t accommodate four high-usage players. With the two stars being untouchable, Pop had to decide between benching White or benching Gay and went with the option that wouldn’t harm the defense or the development of a young core player.

Even the issues we are seeing are not impossible to fix. The Spurs could try to emulate the Thunder, another team which lacks shooting in its starting lineup but makes up for it by getting a lot of offensive rebounds and causing a lot of turnovers to get easy points. Neither Aldridge nor Poeltl is as physical as Stephen Adams on the boards and the Spurs don’t have the length on the perimeter OKC has, but the bigs have been successful crashing the glass at times in the past and with Derrick White as a catalyst, the Spurs have been more active and disruptive at the point of attack. White ratcheting up his aggression on offense could help, too. Even in less than ideal circumstances, he can still get better at driving and getting himself to the line more.

This new starting lineup can work. Even someone who is skeptical about whether it’s the best way going forward like me has to acknowledged that it has worked, even if its numbers are not great. The defense at the team level has improved and Rudy Gay’s addition to the bench has been seamless enough to not hurt the already great job the subs were doing. More importantly, the Spurs have gone 8-1 in the last nine games that unit has started. You can’t argue with that.

Yet I still think that how that unit does on both ends —but especially on offense— is something to keep an eye out for as the team prepares for the playoffs because it might tell us how dangerous San Antonio can be in the postseason.

We know the bench is good, but for most teams their starting lineups are part of their core combinations and often set the tone and determine their identity. The Spurs are clearly hoping this five-man group can do that, overcoming spacing issues with shot-making from the stars and closing down the paint even at the risk of allowing more open threes.

So far, those have been worthy trade-offs for the Spurs. Hopefully that remains the case going forward.