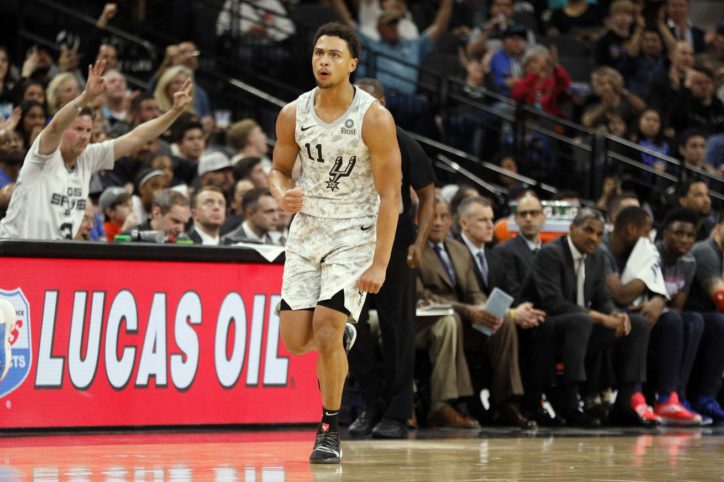 A staple Spurs play hasn’t always been there this season, but they nailed it last night.

Bryn Forbes’ corner three to give the Spurs a 6 point lead with just over 3 minutes to go in their Saturday night victory over the Portland Trail Blazers felt inevitable. From Sean Elliott’s early recognition of the play on the broadcast to the crisp execution and timing, there was no question as to the ultimate fate of the ball once it left Bryn’s hands.

The play starts with the Spurs’ in a common alignment, with DeMar DeRozan preparing to receive two screens as he moves from one wing to the other.

Neither of the screens from Bryn or Davis Bertans accomplish much of anything, and DeMar catches on the right side with Maurice Harkless in solid position.

Davis slides over to set another screen, this time back towards the center of the floor. Harkless appears to want DeMar to take the screen, which is unusual, but that’s not what the play calls for and Harkless’ positioning almost throws off the timing of the play. You can see LaMarcus Aldridge start to move as DeMar fools him for a split second when he plants his right foot after catching and swings the ball through to his right. Fortunately, none of the Trail Blazers realized what that false start meant. Eventually, Davis flips the direction of the screen, giving DeMar just enough room to make it to the baseline.

As soon as DeMar makes his move, LaMarcus sets a hammer screen for Bryn, who has been loitering 3 feet inside the arc at the left elbow. To be clear, Bryn hanging out just inside the arc is always a trap. The screen catches Al-Farouq Aminu flush, stopping him in his tracks while Bryn runs to the corner, catches the chest pass from DeMar and drains the three.

Even though the Spurs nailed the execution in a crucial moment in this game, this particular play hasn’t been all that successful for the team this season. It’s the same play they ran on a sideline out of bounds opportunity with 7 seconds to go in their loss to the Nuggets on 28 December, which, you may remember, resulted in Mason Plumlee breaking up the pass. They haven’t had much luck running it in the past few weeks, either.

Missed shots happen, and they appear to be getting better at the timing and subterfuge required. That’s important, because as with most of the Spurs’ offense, this action is a part of a larger package of plays that share the same setup. The base play, or at least the most common thing they run out of it, is an isolation attack for the wing who cuts over the two screens, which is obviously a scary proposition for defenses facing both DeMar and Rudy Gay. The Spurs have shown a few other options out of similar alignments this year, including this hammer play, all predicated on the threat of those isolations.