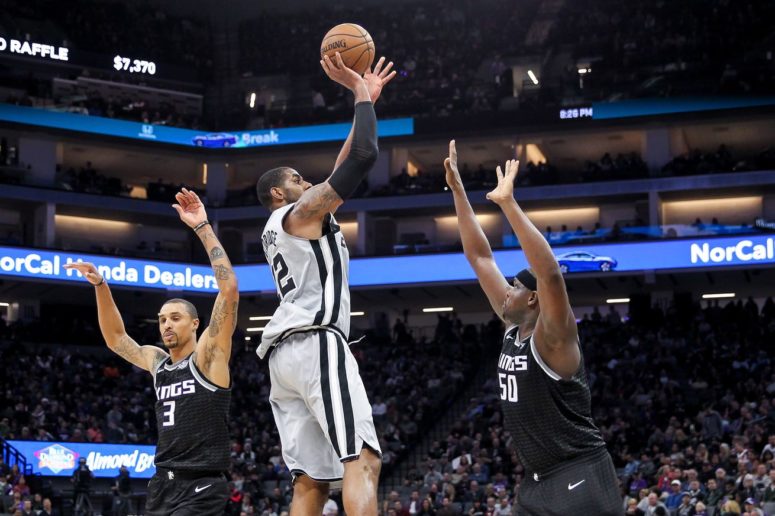 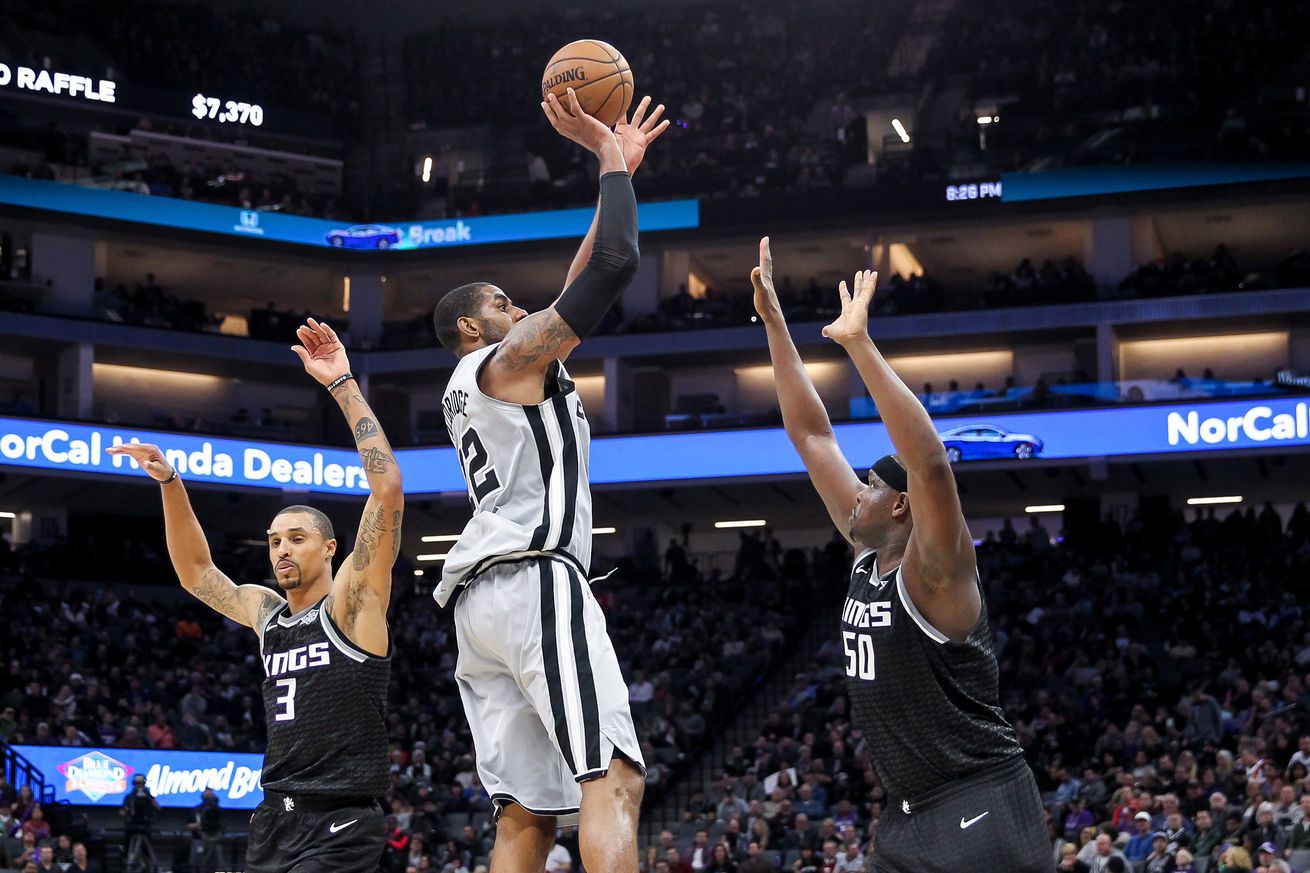 And Murray also had a nice showing in the last game before Christmas.

Somehow, the basketball season is closing in on its halfway point, and for the Spurs, it feels like things have only just begun. With Kawhi Leonard and Danny Green sitting and LaMarcus Aldridge and Pau Gasol rolling, the Spurs faced little resistance in the final game before a well-earned holiday break and beat the Sacramento Kings Saturday night.

With Willie Cauley-Stein serving as the lone rim protector and stranded on an island defending LaMarcus Aldridge anywhere he went, the Spurs finally unleashed a new trick: repeatedly attacking the rim against a team lacking rim protection.

For as good as the Spurs shot the ball from all over the court, the offense hummed because the guys in silver and black picked on mismatches that were often near the basket. It started with Aldridge settling into a nice groove on what seemed like the first possession by hitting a wide-open 3, and from there, everyone else on the team hunted down open shots for each other against a soft Kings D.

The Kings are bad on defense—28th in the league in defensive rating, according to basketballreference.com—and make no mistake: that had a large part to do with the Spurs’ offense grooving. However, on any given night, Aldridge can get hot, Manu Ginobili can look 10 years younger, and exchanging good shots for great shots can result in layups or wide-open 3s.

But what the Spurs showed Saturday night was an ability to generate these opportunities through taking care of the ball and emphasizing Aldridge’s gravity on the floor. When his shooting dragged Cauley-Stein or any defender away from the hoop, the Spurs showed their growth throughout the season by not settling for long pull-up jumpers or contested jumpers late in the shot clock.

While the hot shooting from deep isn’t necessarily sustainable, the decision to play a disciplined style all game long and keep their bigs involved is sustainable. Gasol’s triple-double was the result of one of the best passing big men in NBA history operating in space and with excellent cutters, and Aldridge’s 29 and 10 was a byproduct of the ball moving and teammates consistently looking for him within the flow of the offense.

14 points, 10 boards and 10 assists for @paugasol in tonight’s win! pic.twitter.com/QZdngErsaX

Assuming Kawhi Leonard reaches full health, the Spurs have established a tried-and-true formula on offense that he fits into nicely: limit turnovers, work defenses to their breaking points through ball and player movement, and exploiting an increasing depth advantage.

The 2016-17 Spurs relied on Leonard to carry them through many nights, and it was fair to wonder if it had negative repercussions for everyone else on the roster. For the 2017-18 Spurs to seriously climb into the league’s elite, a marriage between this year’s emphasis and last year’s is essential.

Defensively, the Spurs simply did enough to win. Buddy Hield, Zach Randolph and Willie Cauley-Stein took turns isolating against defenders, and the results were manageable. No Green or Leonard meant Bryn Forbes was assigned to Hield, and though he always brings the effort, Hield has real star potential, which showed Saturday night. He has the size and shooting range off-the-dribble to attack defenders ill-equipped to bother his shot, but at this point in his career, Spurs fans don’t need to worry too much about him.

Down low, Cauley-Stein and Randolph showcased an array of running hook shots and floaters, but few of their looks were easy. Gasol and Aldridge deserve much of the credit for challenging the right types of shots from each player—as in, not jump shots from Cauley-Stein or 3s from Randolph—but also give credit to help defenders for rotating over to contest and swipe at the ball when necessary.

While it has at times felt like this season has been about staying afloat until injuries have subsided, a handful of players can individually demonstrate the overall growth on the Spurs squad this season: Aldridge, Kyle Anderson, Bryn Forbes, and Dejounte Murray.

Within a week’s span, Aldridge’s ability to settle into a groove early in games was the deciding factor in victories against Portland and Saturday night against Sacramento. Because few teams are currently built to defend a large, skilled big man that is surrounded by other large, skilled players, Aldridge often has teams scrambling during the first quarter if he’s hot. Though this has always been the idea behind having Aldridge on the team, the start of the season felt like a departure from last year, and at this point, it feels routine.

For Forbes, Murry and Anderson, it all comes down to each player’s growth after earning enough of Pop’s trust to get regular minutes. To start the year, each game felt like either an opportunity to see a potential foundational piece or a chance to see Pop bench a young guy. By Christmas time, Forbes is starting in place of an injured Green, Murray has been given the freedom to unleash his speed and uncanny coast-to-coast game, and Anderson has become an indispensable Swiss army knife. Murray’s 13 points, 6 assists, and 7 rebounds in 24 minutes on Saturday demonstrate that those minutes earned are being used productively.

In the victory against Sacramento, the Spurs played like a team that is simply better than the Kings, but also a team that is better than it was at the start of the year. They didn’t fall victim to trying to do too much on a possession, and they kept the game mostly out of reach. Time to enjoy the holidays and savor a pretty Spurs win.