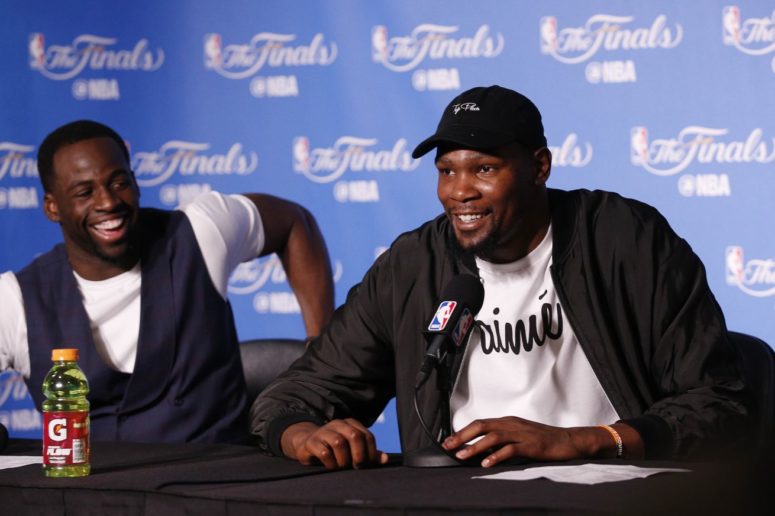 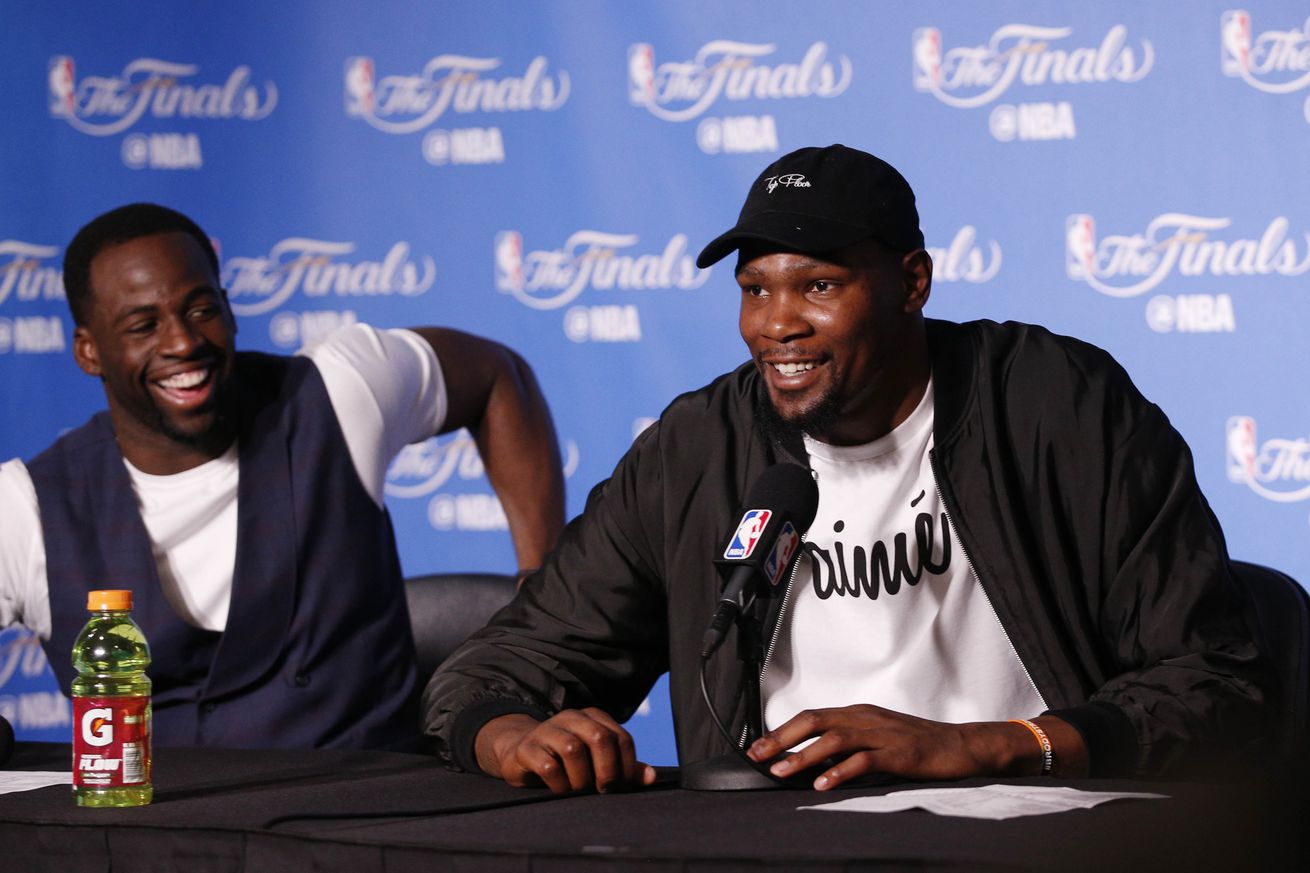 With the Spurs out of the playoffs, there are so many things to get heated up about.

Yup, I’m still angry. But I can’t just sit here and yell at Kevin Durant (or rebut Robert Horry), so here’s part 3 of my rant-a-thon — this time, I rail against successful people.

Well, even Michael Jordan missed a shot now and again.

The whole conceit of this story is that Draymond Green has been markedly improved at controlling his temper and tamping down his emotions in these playoffs compared to last year. What struck me as peculiar is that it seems as if both Flannery and Green seem to be acting as if that Green was suspended for Game 5 of the Finals last year due to an accumulation of technicals.

Of course, that’s not what happened at all. It wasn’t the arguing or the cursing that got him in trouble. It was physical acts. He tackled Michael Beasley, in Game 3 of their first-round playoff series last year, earning a flagrant foul point after the league reviewed the incident after the game. He then was assessed two more flagrant foul points for kicking Oklahoma City’s Steven Adams in the Kiwis in the Conference Finals. Green has argued adamantly that it was his “natural body motion” and an involuntary act he couldn’t control, something that had nothing to do with being emotional. He picked up his fourth flagrant foul point, which triggered his suspension, for punching LeBron James in the beans.

I expected Flannery to reference any of these incidents or put them in context. It sure would’ve been neat if someone asked Green about the wild coincidence about his legs not flailing out and connecting with anyone’s private parts these playoffs, in all these games where the Warriors are throttling everyone and not being challenged at all. It’s terrific that Green has learned to control his rage, but how has he learned to control his body is a better question, if all of last year’s incidents were truly involuntary.

Flannery helpfully included a testy exchange after Game 2 between Mark Purdy of the San Jose Mercury News and Green and Durant on the podium. I made some edits (in bold) to make the whole thing more obvious funny.

Q. Be interested in both you guys’ general thoughts about the game tonight, but also Draymond, I’m interested in your thoughts of how you’ve been able to restrain yourself emotionally and avoid kicking people in the balls.

KEVIN DURANT: Geez, isn’t it obvious? He doesn’t need to kick people in the balls when we’re kicking their asses as a team.

DRAYMOND GREEN: You act like I’m just this troubled guy who’s been in a bunch of trouble and can’t control myself and Jesus Christ it was just that one time I punched a Michigan State football player in the jaw at a bar. And all the other times I totally lost my mind, leading to a suspension that cost my team the Finals.

Q. You’ve avoided going over the line, right, to get any T’s so far? Or, you know, flagrants, which is actually what got you suspended?

Q. No, I… uh… I really don’t want him to do any of that. Especially the last part.

DRAYMOND GREEN: I just been playing basketball, brother. As opposed to last year when I was also auditioning to replace Sebastian Janikowski. And when you got great teammates like I do, who allow me to chill the eff out because we’re up by a billion, it’s easy. So just really trying to lead this team as much as I can in the ways that I do for this team. Not worrying about being the personification of a vasectomy and all that. I think at the end of the day, I think everyone talks to officials. I swear at them like they invented rectal cancer. But going over the edge isn’t going to win me a championship. Being Kevin Durant’s teammate will. I think I’m a pretty smart guy despite saying that the world might be flat and I learned my lesson: don’t accidentally send a picture of my privates on snapchat, so I went over the edge before. Fool me once, you can’t fool me twice.

Speaking of Durant, ESPN.com’s Royce Young went on a bit of a Twitter rant of his own, because apparently it had been too long since anyone said anything nice about Russell Westbrook.

It’s almost like this is some people’s first time to ever watch KD play. He’s been really great for quite a while. https://t.co/YpV8jCvLTw

This is true. Also, if by “some people” you mean those who only watch basketball in June, then it’s actually their second time ever to watch KD play.

The idea Westbrook held KD back is plainly absurd. As this season showed, if anything Westbrook was holding himself back to work with KD.

Translation: You people don’t understand. Russ has been DYING to shoot nearly 2,000 times in one season while turning it over 438 times.

What KD has now is a far better overall team, which has allowed him to invest more in other things, like defense and passing.

Billy Donovan would fine him $500 every time he blocked a shot. Scotty Brooks made him run laps every time he passed the ball. We’re a one-dimensional kinda town, here.

He shot a career-best 53.8 percent with the Warriors. Mostly because they’ve gotten him to take way fewer long-twos and a lot more layups. Or to pass the ball when he doesn’t have a clean look.

Thinking KD has hit some new level of greatness is insulting to his previous INCREDIBLE nine seasons. He’s got a better team. That’s it.

I might as well say that if I’m a better reporter and writer now, it’s an insult to my previous INCREDIBLE nine seasons. I wonder if Young is upset out of jealousy more than anything else. Obviously Durant has been a sensational player for years, but Golden State’s coaching staff and his new teammates have gotten him to buy in to concepts the Thunder never could. He runs all over the court without the ball now instead of being an iso guy. He takes charges and blocks shots and prides himself on defense. He embraces the “passing up a good look for a great one” philosophy.

Is it easier to trust your teammates when your teammates are good? Sure. But with the Thunder we’ll never know how good any of them could’ve been or will be. Losing Durant didn’t liberate Westbrook to be his best self. It turned him into an uncoachable maniac and the Thunder into an amusing diversion. I’ll never stop being angry at Durant for taking the easy way out and joining the Warriors, but I’ll also never blame him for getting the hell out of OKC.