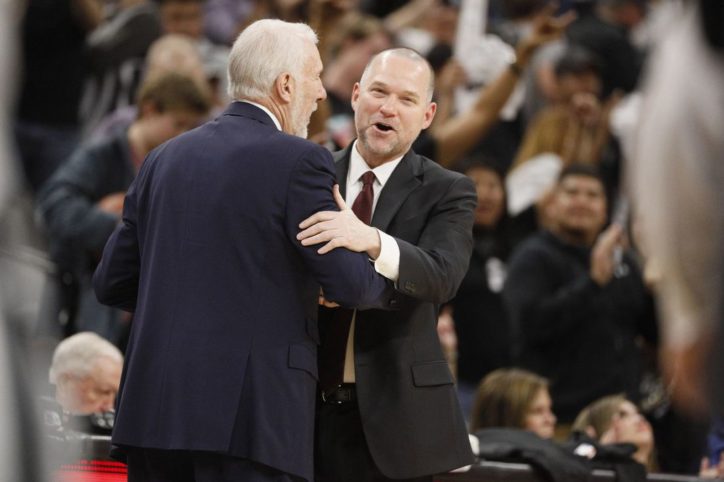 Mike Malone wants Pop in the HoF, but he isn’t going until he’s ready.

Considering this is his first postseason, it has been interesting getting to know Nuggets head coach Mike Malone a little bit better. He’s quite wily, proving that he knows how to coach and has played a large role in Denver’s rise this year. He’s also been ready for an excuse after each loss, claiming their bench has too many former G-League players after Game 1, and after Game 3 he sent footage of Jakob Poeltl to the league to review for illegal screens — never mind that the Spurs could do the same, especially for Nikola Jokic.

However, one thing he has remained steadfast in throughout this series is his praise of Gregg Popovich. His most recent edition was a rant after Game 5, wondering why Pop is not yet in The Naismith Basketball Hall of Fame. He even went as far as saying some college coaches have paid their way to get in, so it’s a shame that Pop isn’t there. (Not sure who or what that’s a reference to, but we’re just going to roll with it for now.)

Pop has certainly proven he is a HOF candidate, and he has met all the requirements to get in whenever he wants. Per the institution’s official website:

“A coach must be either fully retired for four full seasons or, if still an active coach, have coached as either a fulltime assistant or head coach on the high school and/or college and/or professional level for a minimum of 25 years. That person will then be considered for Enshrinement in the sixth year of retirement or 26th year of active coaching.”

However, worthy as he is, there’s a reason he has not been enshrined yet: he doesn’t want it until he retires.

Michael Malone just went on a diatribe wondering how come Gregg Popovich isn’t in the Hall of Fame. The answer is simple: He’s asked not to be considered until he retires from the NBA.

There’s a multitude of reasons to believe why he feels this way, and they’re all so Popovichian:

Regardless, Malone has nothing to fear. Pop will be in the Hall of Fame one day, but only when he decides he’s good and ready. In the meantime, Mike can rest assured that Pop is at least about to be inducted into the Air Force Academy’s Athletic Hall of Fame. The ceremony is coming up on May 4. Pop does plan on attending, so if the Spurs’ season is still alive by then hopefully the NBA schedulers will work around it for him.

Thanks, Mike, but Pop isn’t in the HoF yet because he doesn’t want to be
Source: Pounding The Rock