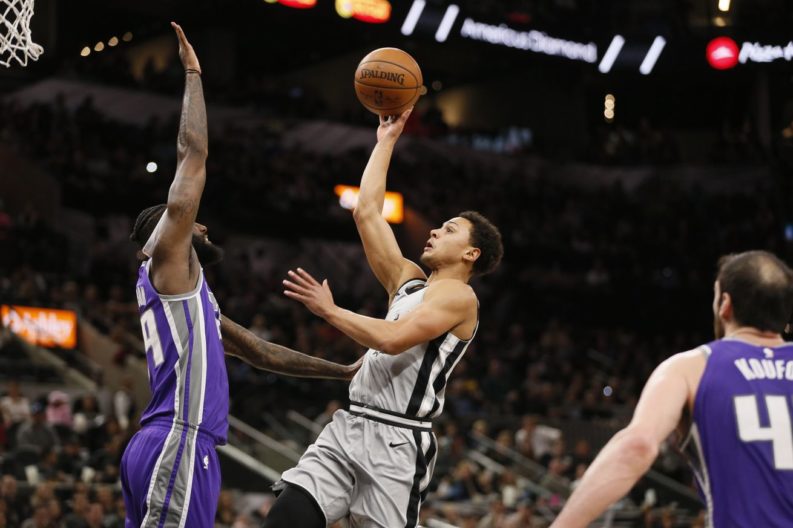 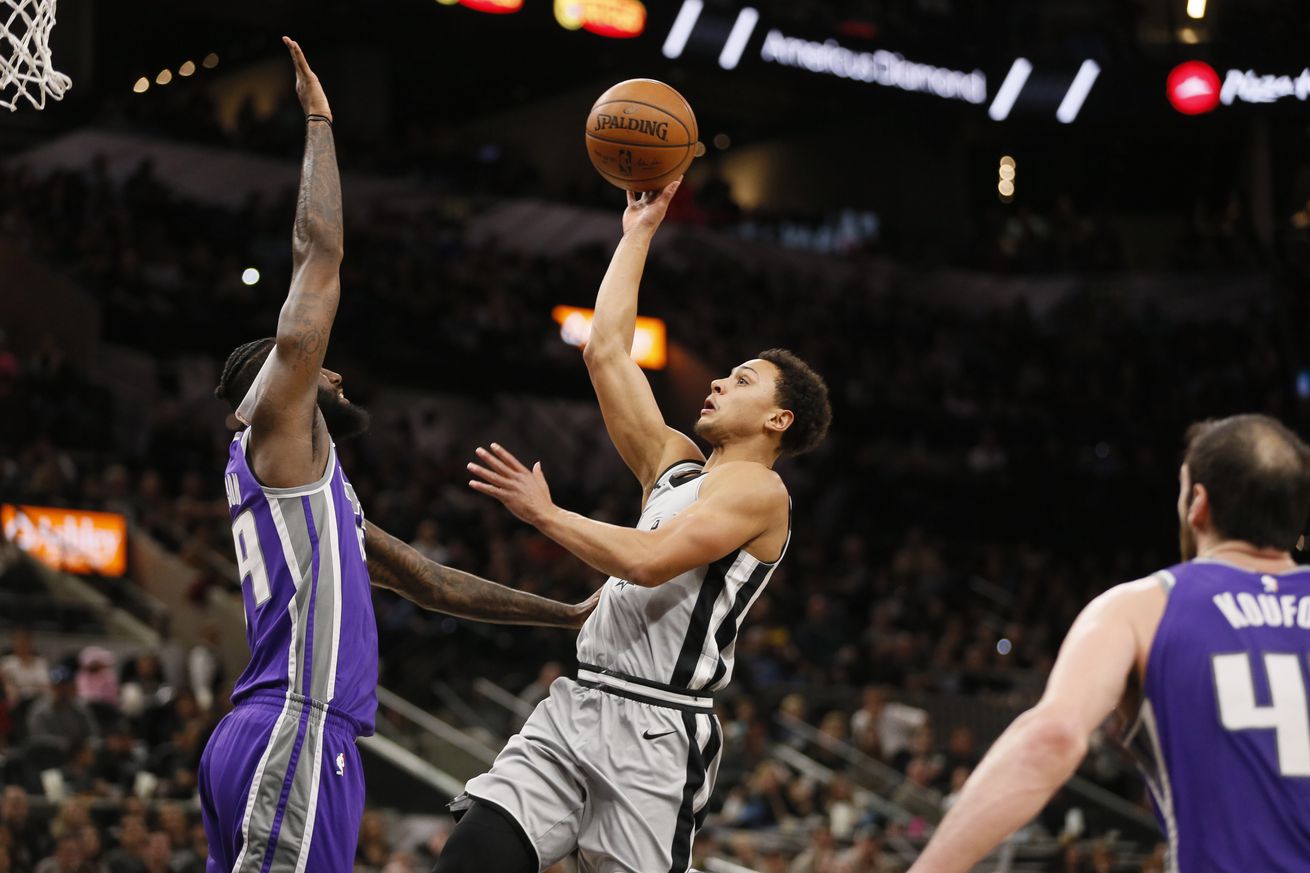 A stern message from Gregg Popovich did not go unheard, as the Spurs turned a half-time deficit into a double-digit win over the visiting Kings.

Reporters wished Gregg Popovich a happy 69th birthday before the Spurs’ tilt versus the Kings, but the 113-98 win was defined by the message he sent to his team.

First halves have been an issue for the Spurs all season long — they own a negative net rating through the first two quarters, compared to a plus-8 net rating in the third and fourth — and Sunday, against a 15-33 Sacramento team, was no different.

The visiting Kings, coming in on the fifth game of a six-game road trip and with an injury report that could’ve been written by George R.R. Martin, pulled away to a 50-49 lead going into intermission, thanks to hot shooting from deep and the Spurs’ simple struggles defending the pick and pop.

Pop’s response was to bench three of his starters and begin the second half with Davis Bertans, Bryn Forbes and two-way guard Darrun Hilliard on the floor. Green would not see the floor for the rest of the game, finishing scoreless on 0-of-2 shooting.

The coach’s message, according to Forbes:

“Come ready. He told us we weren’t ready. Our effort wasn’t great in the first half, he said.”

Forbes certainly appeared ready, despite only learning “one second” before the second half that he would be starting in place of Green. The second-year undrafted guard scored a season-high 23 points on the night, making quick, smart decisions off the catch and showing his continued improvement on the defensive end. He’ll never be an imposing force on that end of the floor — especially playing at shooting guard or in the Spurs’ new three-point-guard lineups — but Forbes has earned and retained his playing time by giving consistent effort and controlling what he can against bigger guys.

A player who’s already shown a knack for defense is fellow backcourt mate Dejounte Murray, who had another double-double with 14 points, 10 rebounds and 6 assists. Just as impressive as the 21-year-old’s stat-stuffing was his efficiency, as he went went 26 minutes without turning the ball over and scored his 14 points without missing a shot. His looks came almost exclusively at the rim, with the sole jumper happening as the shot clock was winding down.

Pop had plenty to say about both after the game, emerging from the locker room armed with pointed praise for his young guards:

“I thought Bryn and Dejounte were great on both ends of the court. That’s the effort and execution — doing your job — that we need. They were great. Other people followed, but in the second half their intensity and execution was very good. On defense, they guarded really well. Bryn’s chasing guys around all night, guys that are bigger than him. He was really something else. I’m proud of him.”

The Spurs outscored the Kings, 30-19, in the game’s pivotal third quarter, carrying a defensive stretch into the final period in which they did not allow a single point for nearly 6 minutes of game time. With the victory, the team managed to give their coach as happy a birthday as he’d allow, breaking out into song in the locker room after the game.

Did it provoke a smile in the 69-year-old?

Did it at least sound good?

“It wasn’t in tune,” said Patty Mills, who had 11 points on 4-of-6 shooting. The Aussie said he joked that he didn’t sing but added to the merrymaking with his background dancing. “I know my scouting report, so I stick to that.”

Pop will likely abide a lack of vocal melody if it comes with greater harmony on the court. With more nights like this from Forbes and Murray, and a return to health as the All-Star break nears, the team should be able to give it to him.

A few more words on…

The Kings head coach exited Sunday’s game in the second half with reports of lightheadedness, which appeared to have Joerger falling to one knee temporarily before being helped to the locker room. Here’s hoping it’s nothing too serious.

A great game from the old dudes

41-year-old Vince Carter, the oldest player in the league, had 21 points on the night. The second oldest, Manu Ginobili, had 15 after returning from a longer-than-expected absence due to a thigh contusion. Also with 15 was Pau Gasol, 37, who added 11 rebounds and three assists.

Aldridge didn’t have one of his better nights (15 points on 17 field-goal attempts), but it did allow me to point out something I’ve noticed over his time in San Antonio.

Defenders will often reach from behind LaMarcus Aldridge while he’s on the block. If they knock the ball loose — instead of allowing it to throw his rhythm off — he’ll often use that as a way to initiate his turnaround motion, as we saw tonight.

One of the funnier Aldridge-isms IMO — he’ll sometimes get the ball poked away while on the block, and let it initiate his natural turnaround motion. It almost always seems to lead to a release that’s clean and in rhythm, like this one tonight over Z-BO. pic.twitter.com/aNAdVlI38R

The three-point shot, making a reappearance

Once upon a time (see: the 2016-17 season), the Spurs were the league’s best three-point shooting team. Despite a roster brimming with deep threats, the efficiency has not been there this season, and they had been amid their coldest stretch yet heading into this game. Here’s a look at their three-point shooting since January 19th:

For a while versus Sacramento, it looked like they were headed down the same icy path once again. Thanks largely to Bryn Forbes (5 of 8) and Patty Mills (3 of 5), the Spurs ended up 44% from deep on the night, which will hopefully begin a trend back in the right direction.

While LaMarcus Aldridge shot free throws, the Spurs coach put one arm around his new starting point guard to give additional instructions. Later in the game, he subbed Murray out only to stop him on his way to the bench, spryly demonstrate how a few footwork techniques, and send him to his seat with an affable smack on the backside. In a season whose primary narrative is the Spurs’ series of maladies, Pop grooming a new starting point guard is one of the most compelling underlying storylines, and it’s been great fun to watch.

The most exciting play any King made on Sunday

Happy Bday Coach Pop!! One of the best to ever do(in my opinion thee best) and even more great guy! #Respect