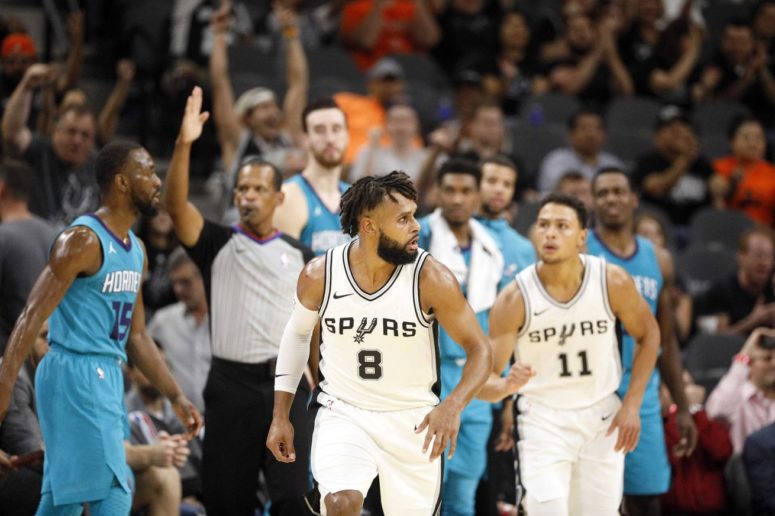 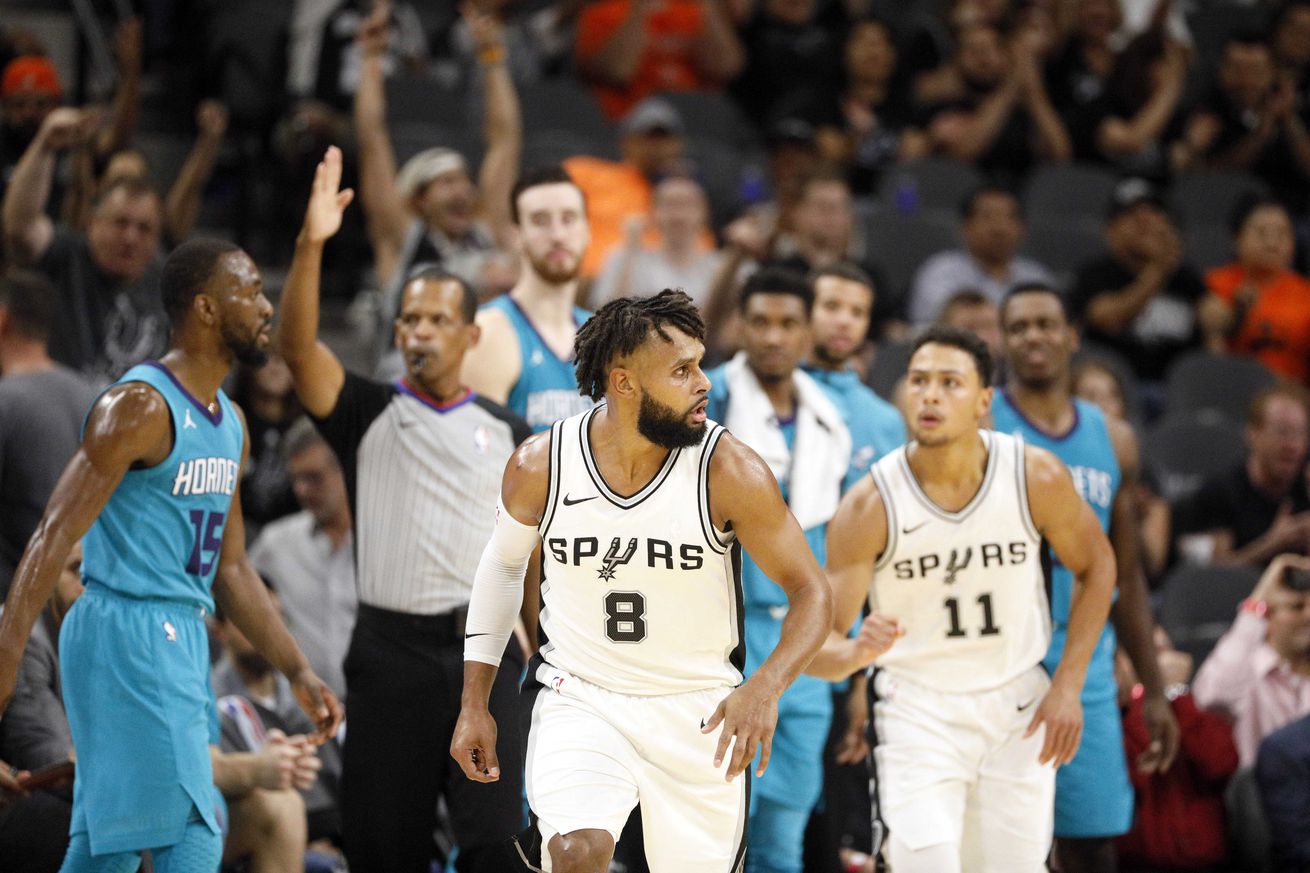 The Spurs ended their four-game skid thanks to a bit of grit and a lot of help from the bench.

Tenacious. Gritty. That was how Gregg Popovich and Patty Mills summed up the Spurs’ 108-101 win over Charlotte on Friday night, words that could also describe the guys that led the charge in the victory.

On the second night of a back-to-back and still down three key players, the Spurs found a way to snap their losing skid while facing a Hornets team that had won three straight, bringing a physical intensity and getting some big contributions from the bench.

The physicality could be seen in the box score, where the two teams combined for 70 free-throw attempts. Twenty of those were taken by Hornets center Dwight Howard, who was consistently swarmed by white jerseys every time he touched the ball near the basket. Howard still finished with a solid line, but San Antonio did a good job of limiting easy baskets in the paint for Charlotte. Howard’s 10 missed free throws were a key difference in the final score.

Execution was something Pop stressed before tipoff, offering no injury-related excuses for what he expected of his team:

“It’s a pretty simple game. It’s always about who executes the best for more of the 48 minutes. Talent has something to do with that, but at the same time there are certain things in the game that don’t require talent — they just require discipline, habits, communication, those kinds of things. We’re just working on those so we can be on the same page, systemically, strategically.”

Merit in the mundane; process over results — they’re the type of virtues echoed in the Stonecutters’ Creedo, which hangs in the Spurs locker room (from which this humble blog gets its name). It’s a metaphor for perseverance, but it’s also a parable of self-actualization. The player that works day in, day out on his game is, essentially, both stonecutter and stone.

He may not be at the end of the rotation right now, but Forbes remains San Antonio’s 15th man, the lone player on the roster whose contract is not guaranteed. And until January 10th (when his contract becomes guaranteed and when the team — knock on wood — should be back to full health), it’s impossible to say how things will shake out for him.

Forbes has come along great thus far, showing significant development as a defender and decision-maker with the ball in his hands. His coach has taken notice, as well:

“Bryn’s progressed since the day’s he’s been here. Day by day, month by month, year by year.”

More than any Spur, Forbes feels the weight of each possession he’s a part of: “Every time I touch the court, I have to take advantage of it,” he said after the game, “I don’t know when I’ll be in there (again), so I’m just trying to do the right things to stay on the court.”

The second-year guard went off on Friday, making 8-from-11 for the field for a team-high 22 points. He shot and attacked off the dribble with confidence, helping key a 14-0 third-quarter San Antonio run that wrested the lead away from Charlotte.

The Spurs reserves combined for 64 points, with Rudy Gay scoring 20 and Manu Ginobili and Dejounte Murray both chipping in 10. Gay was a force on the block and in transition, and led everyone with a +20 plus/minus on the night.

cause we all need another look at this one pic.twitter.com/ZFT1jFdxsS

Gay is still learning his way around the system; he’ll still occasionally get turned around on defensive rotations and he should only get more comfortable offensively, as well. Yet, fans have to be excited with what they’ve seen so far.

With Gay at the four, Pop found success in smaller lineups that featured the bite-size backcourt of Forbes and Mills, the latter coming into the game averaging 31.6% from the field and 25% from deep. But the Aussie made four three-pointers in the last five minutes of the game — many of them contested looks off the dribble — shaking off another cold start to help secure the win. He finished with 17 points, easily his best game of the young season.

Mills and Pop both feel that the shots are due to start falling again. “That’s just the way the world is — whether it’s shooters or hitters in baseball,” the coach said. “That’s what they do.” Mills noted the importance of remaining aggressive and not shying away from open looks.

Individually and collectively, healthy or not, the Spurs still have a lot of work to do. Luckily, there’s just as much to gain in the process as in the results — and plenty for fans to appreciate, as well.

The Spurs totaled a season-high 31 assists on 39 field goals. Every player notched at least one assist, and Pau led the way with seven. More of that, please.

Manu the Magnificent, Pop the All-knowing

Ginobili’s regular-season odometer hit 1,000, a feat he said he wasn’t aware of heading into the night, and one he perhaps finds more symbolic than anything else:

“It depends how you see it. I do think that playoff games count. I’m not gonna complain – still, 1,000 games is a lot of games, a lot of years, and I’m proud to have made it so far.”

Regardless, Ginobili was a part of the bench’s strong showing, which is especially impressive because a) he has, for a while now, often struggled in SEGABABAs and b) he was supposed to be getting the night off. Ginobili said he felt better than expected as tip-off approached, and it showed:

Speaking after the game, Pop couldn’t say how Manu, even when surpassing another milestone, continues to play at such a high level. But that doesn’t mean he didn’t have an answer:

“Why do you ask me questions that are unanswerable? What am I, the Oracle of Delphi or something? That kind of stuff is — why is the grass green? Why isn’t chlorophyll yellow? I don’t have the answers to that stuff.”

Some praise for Pau

Gasol’s contract may eventually become an albatross, but for now he’s been fine on defense and a necessary facilitator on an offense without its two highest-usage creators. The Spaniard had a team-high seven assists to go with 10 boards and five points. He was the only starter to have a positive net rating (+10) on Friday, which has been something of a trend through nine games.