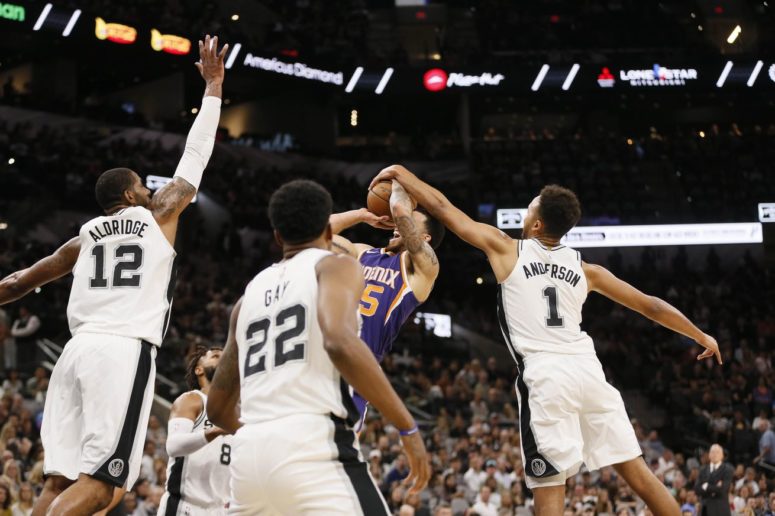 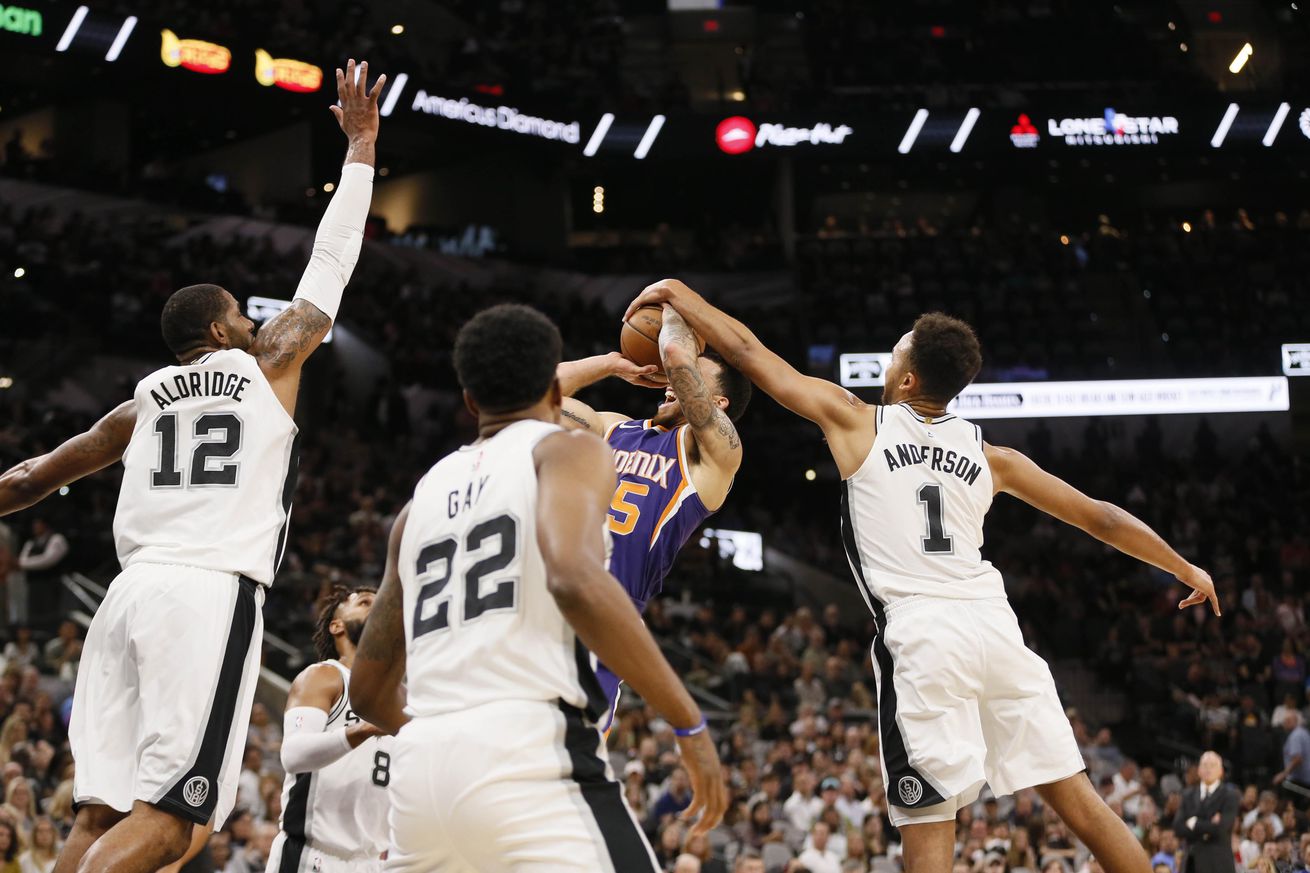 Gregg Popovich moved to 6th all time in wins, as the Spurs rode a strong third quarter to a 112-95 victory.

On the day the clocks turned back an hour, it’s fitting that the Suns set early in San Antonio. Shaking off a 35-point second quarter from the young visitors, the Spurs tightened up their defense, turned a five-point deficit into a double-digit lead, and never looked back. They’re now winners of two straight, improving to 6-4 on the season.

After the game, it was 26-year-old rookie Brandon Paul that spoke first to reporters, attributing the team’s 34-13 third quarter to a renewed focus:

“I think our focus was there. There was a stretch when we were on the road and may not have come out with the most focused mentality. But the last few games, we’ve come out and brought the fight to them, and it helped us and put us in a better situation.”

Paul didn’t shy away from the assignment of defending Devin Booker, who came into Sunday averaging 23.4 points per game. Between him and Danny Green, the young scorer saw little daylight to fire away, finishing with a season-low nine points.

The journeyman appears on his way to being the next PATFO Did It Again story. His defense has earned him more early minutes than few Spurs rookies before him, but he’s shown an all-around game that could keep him in the rotation even after the team’s back to full strength. He had a 11 points and three steals, shot 2-of-4 from three-point range, and continued to impress as a ball-handler in the pick and roll. He also had this sweet dish in transition to Dejounte Murray:

Fellow reserve Bryn Forbes followed up on his 22-point outburst versus Charlotte with 12 more on Sunday, helping San Antonio sustain their dominant third quarter for the full 12 minutes. With Manu Ginobili out, the Spurs needed the rest of the bench to step up and make plays, and both players answered the bell.

That guys like Paul and Forbes shined against a squad loaded with lottery talent is somewhat symbolic of what’s gotten Pop to number six in the all-time wins list. You don’t get titles without your Duncans, Parkers and Ginobilis, but you don’t consistently bank 50-win seasons without capable role players who are put in the best position to succeed.

The Spurs were up twenty-something with four-or-so minutes to go on Sunday, and Pop could still be seen in Forbes’ ear, doling out instructions in an early November game that was already over. Whatever he said had no bearing on win #1,156 but — who’s to say what role it plays in #1,157.

About that third quarter

This one was over by the start of the fourth, thanks to a third period where the Suns were held to 4-of-21 shooting from the field. The Spurs reeled off a 12-0 run to begin the period, en route to equaling their highest-scoring quarter of the young season with 34 points.

It’s worth noting that the Suns are finishing up a five-game, coast-to-coast road trip in which they’ve traveled over 6,000 miles, and that may have had something to do with them flaming out early. However, the short-handed Spurs were also playing their third game in four nights and are certainly battling some fatigue themselves.

Rudy Gay (who went for 12 and 5 on Sunday) is a handful in the post for all kinds of reasons, and him finding shooters on hammer plays is becoming one of them. More, please.

Danny Green’s transformation to The Professor has been fun one of the more entertaining narratives thus far. He scored the first bucket of the game off a crossover pull-up two, and put up another 14 points, combining his outside shooting with some markedly improved drives to the basket.

Another 21 and 9 for Aldridge

Another day, another strong performance from one of the league’s most underappreciated stars. Go on, nothing to see here.

Mills may never be an elite creator out of the pick and roll, but he needs to be a threat to pull up in order to keep defenses honest. It’s what he did well in the win over the Hornets, and we saw more of a focus on it tonight, as Mills consistently went to his right off of screens from LaMarcus Aldridge and immediately pulled up for jumpers. Many of them went in, as he finished with 17 points on 7-of-11 shooting.

Pop, after the game

Following his landmark win, Pop appeared before the media only long enough to speak on the Sutherland Springs shooting earlier in the day. It was brief but, as usual, his words carried plenty of weight:

Pop for America. He came out postgame, said this to reporters, and walked away. pic.twitter.com/RnHZINBL0P