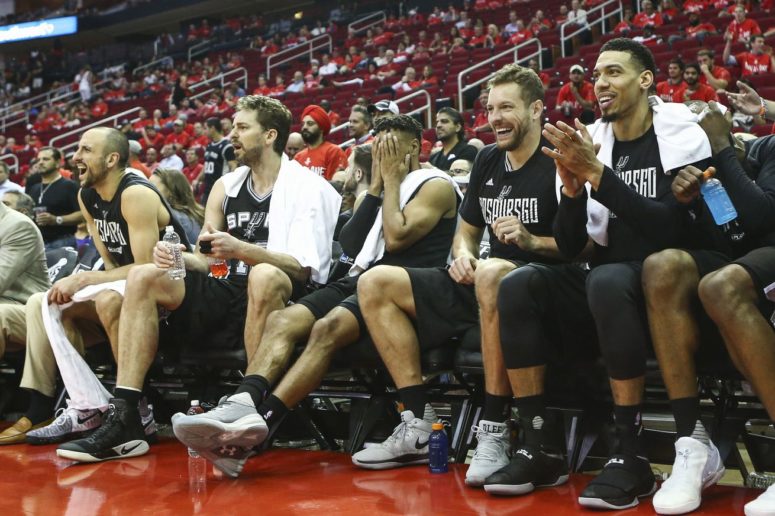 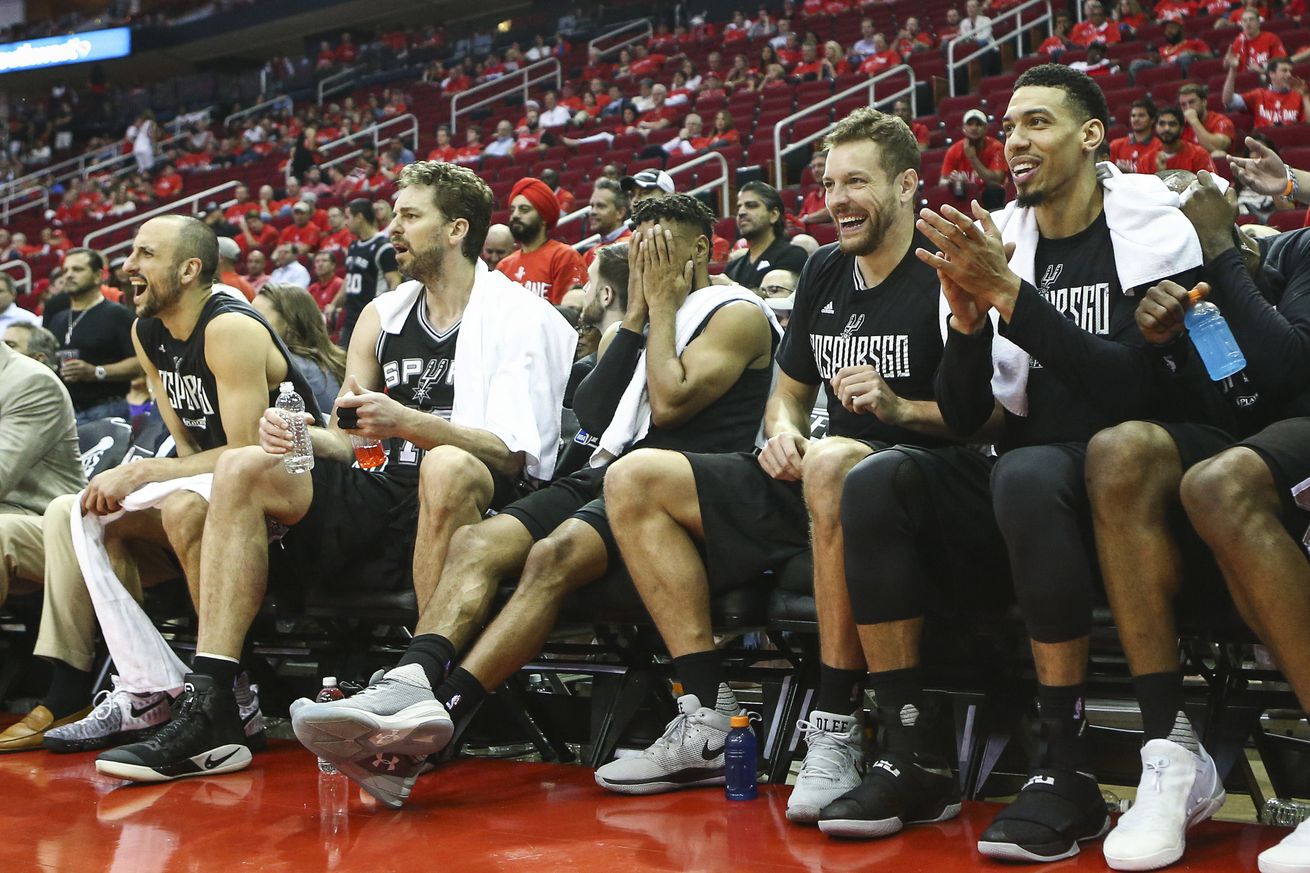 I’ve been telling you guys that staying big is the key this whole time, haven’t I? (Oh, I haven’t?)

I think that pretty much sums up my analysis of that game. No, wait, I’ve got more.

C’mon, man. What even was that game? How can I analyze that beyond the obvious “Spurs gonna Spurs” meme? This is what they do. They’re at their best when stars are out, when nobody is giving them a chance, and everyone assumes they’re going to be content to chill and take an “L.”

They broke the game open early in the second quarter with a lineup of David Lee-Kyle Anderson-Jonathon Simmons-Patty Mills-Dejounte Murray. In Game 6 of the Western Conference Semi-Finals. Just like we all figured back in October, right?

This is why Gregg Popovich collects all those Coach of the Year trophies while you and I collect souvenir cups at concession stands. He spends the whole season building up his bench from 6-15 and has for years. Casual fans, talking heads and the national reporters parachuting in assume he does it to keep his stars fresh and to keep the wear and tear down on veterans in their 30’s. It’s mostly that, sure. But it’s also to prepare for contingencies such as Tony Parker getting hurt, LaMarcus Aldridge having a balky knee, or, I don’t know, a team-wide scurvy outbreak. Whatever.

Pop doesn’t play his deep reserves only in garbage time the way most coaches do, giving them token minutes to make them feel involved. No, he puts them in meaningful situations, time and again, in the guts of a game, against good opponents and bad, just to see what happens, just to see how they react. Do they know the sets? Are they moving the ball? Are they engaged defensively? Are they competing?

Not one man on the Spurs bench thought they were playing just to “see what happens” when news filtered in a couple hours prior to the game that Kawhi Leonard would be out with a sore ankle. They all still believed in each other. From the opening tip it was evident how much they wanted it.

Make no mistake, the Spurs won this series in overtime Tuesday night. Game 6 was just the epilogue. I firmly believe, as they trudged into the bus after blowing Game 5, even though Leonard was sidelined in that extra period, a sobering reality hit the Rockets like a ton of 25-foot bricks. If it was going to require this much work of them — a full 7 games— to get past the San Antonio Spurs with Leonard, a compromised Aldridge and a supporting cast of misfit toys, what chance would they have against the Death Star in the Conference Finals?

To quote former Eagles running back Ricky Watters, who was asked why he didn’t try harder to catch a pass late in a 21-6 loss, “For who? For what?”

I think they cashed it in mentally in the showers Tuesday night, Kawhi or no Kawhi. They threw in the towel, from their leader on down. Is that a hot take? The Spurs had to do their part though, and full credit to them for smelling blood in the water from the opening tip. The more tentative Harden was, the harder they went at him, throwing random doubles high on the floor to trap before the screener even came. Tossing it to Pau Gasol in the post repeatedly in the third quarter. Gasol didn’t score every time, but man, he did a great job of putting his full weight into Harden over and over every trip down the floor. Through six games in 11 days, they wore him down to a nub.

The Spurs won by damn near forty, playing as dominant a playoff game as they ever have, and did it without their MVP. One can only break that down but so much. So if you don’t mind, I’ll just offer a few scattershot thoughts for the game and the series and call it a night, okay?

This was Aldridge’s best game of the playoffs, obviously, and perhaps his best all season. Did it take Leonard’s absence for him to feel like an alpha again? Who knows. But from the first possession he was aggressive in going to the post, decisive in his moves, not falling away on his jumpers but going straight up with them, and rebounding like a demon on both ends. Aldridge took 26 shots in 35:45, which is positively Westbrookian in this offense. That he took only two free-throws is a feature, not a bug. It meant he was shooting quickly and instinctively, not hesitating or thinking. He scored plenty on Clint Capela, sure, but unlike the other games he made sure to abuse the mismatches against Ryan Anderson and smaller opponents.

This is the Aldridge the Spurs need against Draymond Green. It’s their only prayer of staying in the games with the Dubs.

Aldridge’s tag-team partner Gasol was fantastic in his own right. He used his length well on both ends, swatted everything in sight like some scruffy Godzilla, cleaned up the glass and deftly found shooters when the shot wasn’t there.

As you’re aware I’ve been calling the Spurs to play small against the Rockets all series long, but I loved their strategy to keep throwing it into the post over and over in the third quarter once Houston was on the ropes. Gasol sapped whatever few drops of juice and will were left in Harden’s body. I’m still not convinced that he’ll be able to play at all against the Warriors, but the veteran Spaniard shone bright in Game 6.

But. Hypothetically speaking, if any star were to ever throw a game, I mean that first half from Harden would be what it looks like, right? Or am I crazy? Zero shot attempts in the first quarter, five brain-dead turnovers in the half, each sloppier than the one before, and as placid and serene as a cow in Calcutta all the while.

Regardless of why or how, I can’t think of any MVP candidate ever mailing in a performance like that in an elimination game. That was embarrassing. It’s one thing to play poorly. Harden didn’t even answer the bell.

I wonder if the media and the pundits will make him wear this for the next 20 years the way they did with David Robinson.

I never want to watch those stupid clips of Hakeem Olajuwon scoring on the up-and-under and the “Dream Shake” on Robinson again. Seal them in the vault forever. It’s over now. Show Ginobili blocking Harden instead.

I think it’s clear who should’ve been the MVP all along.

Jonathon Simmons was just ridiculous this game and all series, really. It’s remarkable how he’s gone from Pop’s doghouse late in the season to like, the fourth most important guy on the team in a span of a month. He’s in rhythm with his mid-range pull-up and taking them confidently. He’s attacking the rim without mercy. Most of all he’s learning to use his athleticism on defense for more than just crowd-pleasing chase-down blocks and is actually moving his feet laterally in front of a ball-handler instead of vertically from behind one. He made Harden’s life a living hell these past two games and was the single biggest reason the Spurs won this series.

It goes without saying that Simmons will have to continue to play like this for the Spurs to hang in against the Warriors, but either way he’s sold me as Manu’s successor in the sixth-man role. With the Spurs cap situation being what it is it’s going to be difficult to keep both he and Simmons (or either of them, frankly), but when you take into consideration that Murray —and Parker, presumably— will be on the roster next season and that Ginobili likely won’t, if the decision comes down to having to choose one or the other, Simmons, who’s a year younger than Mills, seems to make more sense.

Speaking of Murray, good lord he was awesome tonight. Every floater dropped, which always flatters his final line, but even beyond the scoring he was all over the glass, he created for others and his defense was manic in the best of ways. It spoke well of his character that he didn’t mope at all after getting a surprising DNP: CD in Game 5 after playing fairly well I thought in Game 4. He got another chance in wake of Leonard’s injury and made the absolute most of it, with 11-10-5-2-1 and a finishing with a game-high +33 in 23:45. The folks calling for the Spurs to sign Chris Paul or George Hill in free agency slay me. One, with their meager cap room, it couldn’t happen even if they wanted it to. Two, they’ve got their point guard for the next decade already on the roster. The kid’s 20 and he’s a Spur in every sense of the word. I’m pretty psyched about his future.

A nod to Kyle Anderson. Don’t think I didn’t notice the lift he gave the team upon checking in late in the first quarter. He played on Thursday the way I’ve always wanted him to, with no hesitation on his shot, making the perfect pass every time, using his length effectively on defense. When he trusts himself and doesn’t defer or melt into the scenery Anderson can absolutely be an asset. They’ll need him too, against the Warriors.

A random thing in this game that I loved seeing: When Danny Green and Trevor Ariza got tangled on the floor in the second half, all four Spurs on the court with him rushed over to literally bulldoze him as far away from the altercation as possible. C’mon Danny, let it go, don’t do anything dumb, we’re going to need you against the Dubs.

No one on the Rockets got anywhere near Ariza.

Another random thing I loved: Pop pulled a “Shaqtin’ A Fool” move but nobody noticed it. For as much crap as JaVale McGee got earlier this season for trying to inbound the ball after his own team scored, Pop essentially did the same thing in Game 6, taking a couple of steps onto the court and trying to call timeout after Simmons fed Aldridge for a layup with 4:42 to go. The refs ignored him and Pop realized he’d had a brain cramp. Go rewind it back and check.

By the end of Game 5 I think Mike D’Antoni realized that for all the bells and whistles of the 5-out lineup with Ryan Anderson at center, he wasn’t gaining any traction with it. At best, thanks to its defensive shortcomings, it would break even against the Spurs. It was just a way to tread water for a few minutes, not a solution.

By Game 6 he just had no more cards left to play. It’s a theme we’ve seen repeated over and over again with the Spurs against his teams. When it gets late in a series they just get ground down, they rotate a half step slower, their shots stop falling and they can’t find a Plan B.

I think he plays too many people, frankly. Next time just play five dudes the full 48.

I bet $150 on the Rockets for the series after Game 1. I donated it for the cause. You’re welcome.

A Western Conference Finals where the Spurs are both the good guys and the prohibitive underdogs? Where am I?