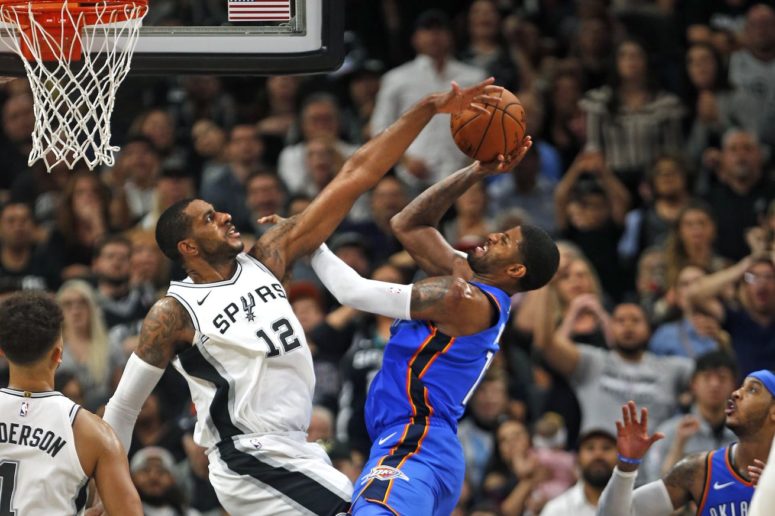 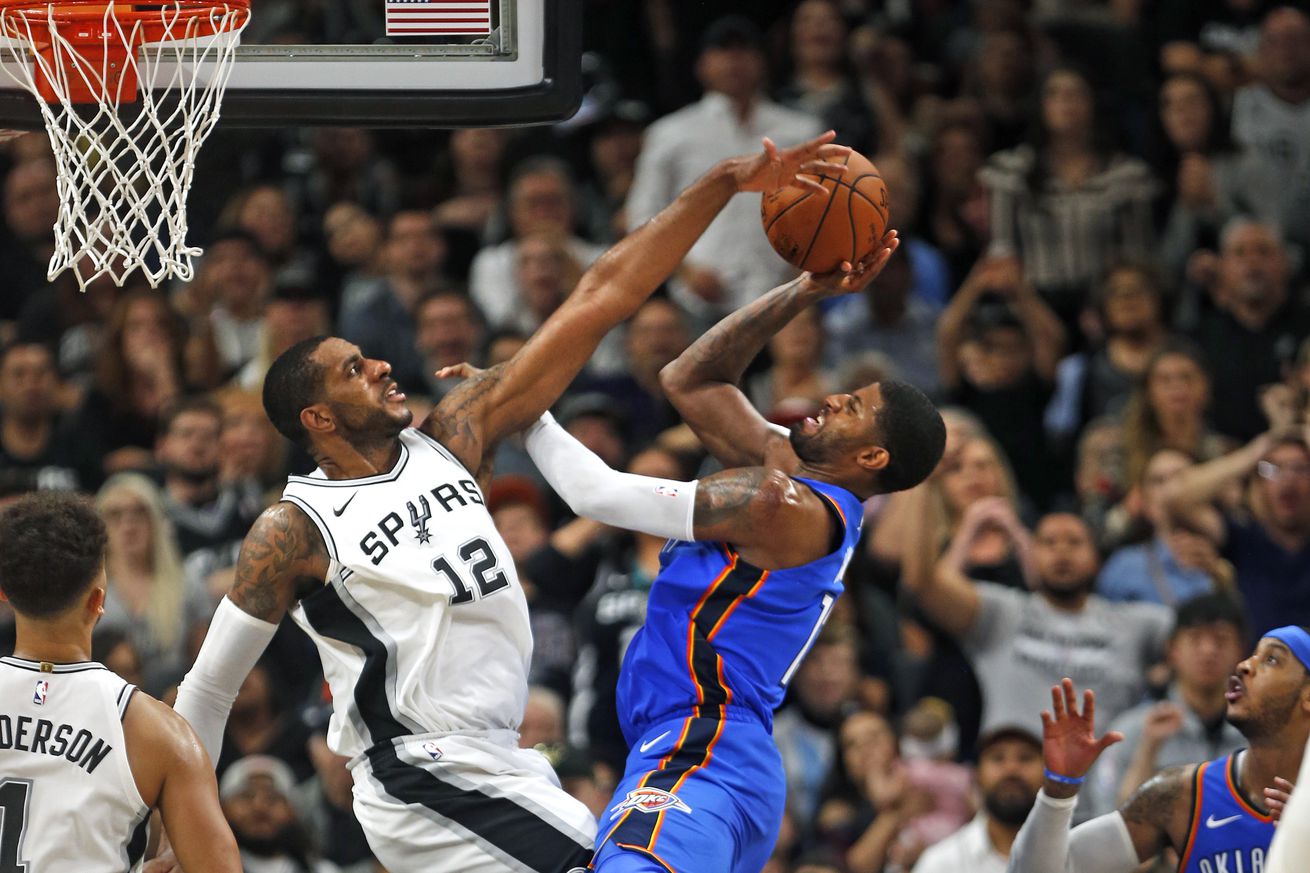 The Spurs overcame a 23-point first-half deficit to beat the star-studded Thunder, improving to 10-6 on the season.

There was little consensus among Spurs players on how they pulled off an unlikely come-from-behind victory over the Oklahoma City Thunder.

LaMarcus Aldridge, who had 26 points and 9 rebounds, said it was about poise, and “not making the hero play.” Aldridge indeed had an efficient night, going 8-of-14 from the field and sticking to his strengths against an undersized Thunder team. The Spurs had nine turnovers in the first half, but just four in the second.

Pau Gasol (14 points, 8 rebounds 4 assists, 2 blocks) talked about taking things one possession at a time. “That’s what you gotta do… it takes one, two plays, three plays in a row, but you gotta start somewhere to turn it around.” It was Gasol who keyed the Spurs’ 10-0 run that turned a 23-point deficit into a 13-point one, scoring the first two baskets and assisting on the next.

Kyle Anderson (10 points, 6 assists, 4 rebounds, 1 steal and 1 block) said the team “got a little nastier” and “more physical on defense.” Anderson, who caught a Steven Adams elbow in the third quarter, could attest to the game’s physicality better than anyone.

Gregg Popovich put it a bit simpler in his third-quarter sideline interview:

All of the above are of course correct. The Spurs leaned on a joint effort, renewed focus, one classic sideline moment, and a swirl of bulletin-board platitudes to materialize in order to put together the third-highest comeback win in the Gregg Popovich era.

And yet it was all nearly undone by a Carmelo Anthony jumper, which he coolly stepped into following a desperate struggle for a loose ball that couldn’t find its way into San Antonio hands.

For a moment, the excitement that had swelled to a fever pitch within the AT&T Center was let out. “I thought it was a three,” Danny Green said afterwards, smiling.

Unfortunately for the visitors, and much to the delight of Spurs fans, an official review confirmed that Melo’s toe was on the line, and a shot that could’ve tied the game at 102 fell just short. It was the final twist in the most thrilling game of the Spurs season to date, but still left Gasol to make a final pair of free throws and the defense to put up one decisive stand.

Once it was over, San Antonio improved to 10-6, banking another Kawhi-less W and showing the team has a number of ways to respond to adversity early in the season.

Shutting down the Thunder Big Three

Anthony (20 points on 9-of-17 from the field) looked great, but the Spurs did a good job of keeping him out of the paint and forcing him to shoot over length. OKC’s other two stars didn’t fare so well, however.

Credit Green and Anderson, who made life difficult for Paul George and 2016-17 MVP Russell Westbrook. The pair combined to shoot 10-of-38 from the field.

Bearing in mind the small sample size, Friday night’s win was in line with the way the two teams have performed down the stretch of close games. According to NBA.com, the Spurs are currently second in the league in net rating during ‘clutch situations’ at +31 in 19 minutes. The Thunder? Dead last at -46.4.

Green was once again excellent on both ends, staying in front of Westbrook for much of the night and getting a couple of key stops in transition. Here’s an extended quote from Pop when asked about the shooting guard before the game:

I think he continued to take (his defense) very seriously. Then he started doing things like blocking shots on the break in transition. We wondered, where the heck did that come from? I don’t remember doing that drill. We don’t have such a drill. But he was doing it. So he’s done that on his own, in deciding to be an all-around player.

I’ve never seen him in a gym by himself saying, ‘Hey film guy, go dribble down there, I’m gonna come behind you and I’m gonna knock it.’ I think it’s just a competitiveness and an acknowledgement that there is kind of a weakness in the guy that’s ahead of you, when he goes up he has to let go of it at some point unless he goes up and dunks it, there’s a window in which you can smack it up against the board. He probably saw LeBron do it and thought it was pretty cool.

Seemingly relegated to the end of the rotation to start his second season, Davis Bertans was given an opportunity in the third and fourth quarters on Friday, and he delivered. The shots falling (he was 3-for-4 from deep) shouldn’t shock anyone (really, any Bertans jumper that doesn’t go in should be seen as a failure on the universe’s part for not acting as it’s supposed to).

The surprising part was that he was used in a way that wasn’t to the detriment to the defense or on the glass. A possible reason? Bertans playing as the de facto small forward, sharing the floor not only with a traditional big but also a serviceable four like Kyle Anderson or Rudy Gay — something we’ve not seen much of, and which shores up some of Bertans’ key shortcomings.

It was just 11 minutes of play, but this has to be seen as a positive for a guy whose role on the team has seemed as shaky as ever.

The Thunder are still figuring things out

Falling to 7-8 on the year, OKC is still clearly not the superteam it hopes to be. Their offense has been an issue early on, and that was clear as the game unfolded, with the ball sticking more and their stars growing increasingly dependent on isolation plays. It’s still November, though, and there’s still reason to think they can be a legitimate threat come playoff time.

Pop sums up the win, gives a shoutout to PtR

“It was a fine win. The guys really dug deep, (kept) pounding the rock, kept a great attitude, just kept their minds on playing basic basketball and things turned their way. But the effort was great, we played a lot smarter in the second half, took care of the ball, and just showed a lot of courage. A lot of good performances by a lot of guys, and overall a great team win.”