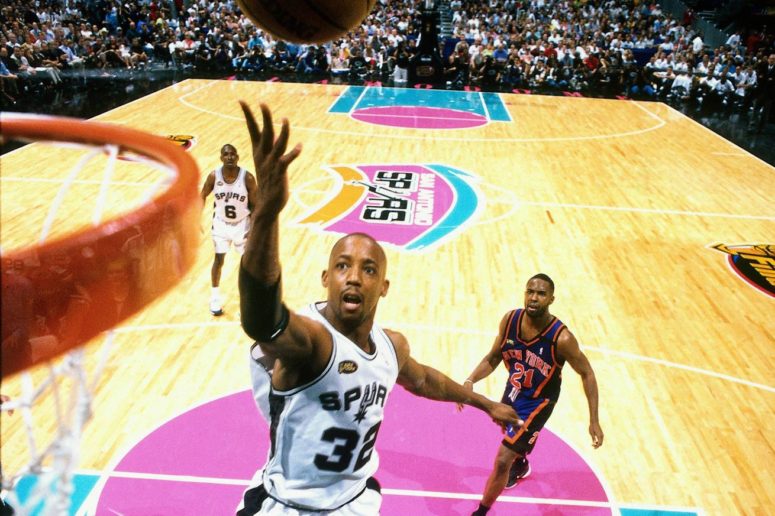 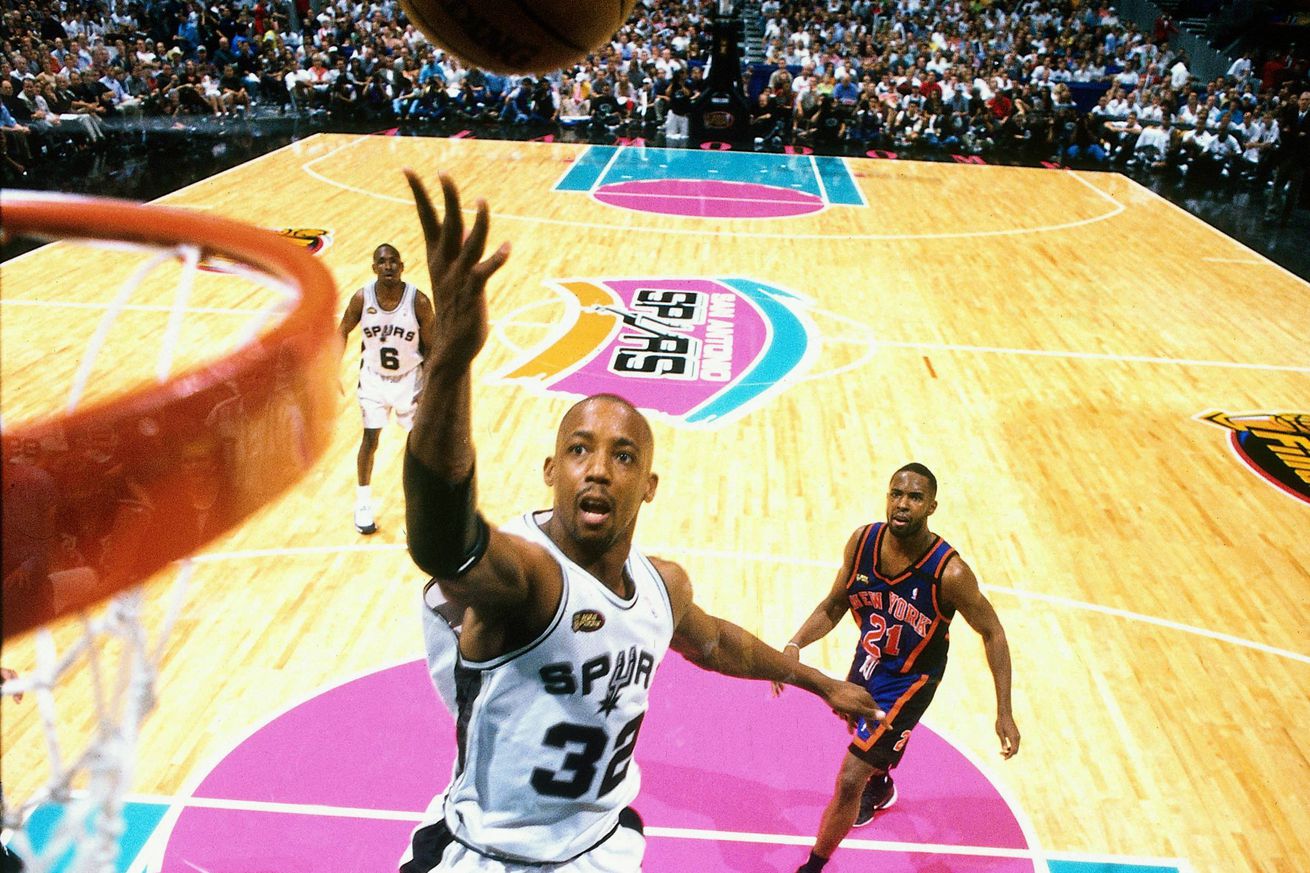 From his work on the court, to his persistence off it, Elliott’s game found a home in San Antonio.

Basketball is not a one-man game. It takes a team. Sure, there are superstars, there are leaders. But without a team effort, a superstar can only get so far.

Sean Elliott joined the San Antonio Spurs just as something special was happening in the Alamo City. Elliott didn’t content himself with remaining in the shadow of greatness, he stood alongside a giant and made significant contributions with him. His talent, positive attitude, and championship mentality helped him to one of the Spurs’ greatest playoff moments, and their first NBA Championship. Season after season Elliott’s relentless pursuit for greatness added to a culture that was defining and separating itself from the rest of the NBA. Always a fan favorite, Sean Elliott continues to represent the Spurs to fans at each and every game. That is why to this day, #32 is

In 1989, the San Antonio Spurs were coming off their worst season in franchise history. The impending arrival of David Robinson was causing a citywide frenzy of excitement. Head Coach Larry Brown was unknowingly preparing for what would become the greatest single-season turnaround in NBA history.* The pieces he was assembling would not only get the Spurs out of slump, but would build the team that would take the Spurs through their first Championship in 1999.

Sean Elliott grew up in Tucson, Arizona the youngest of three boys raised by a single mother who worked nights as a nurse. Before he tried his hand at basketball, young Elliott had already been named an MVP in soccer and football, an all-star in baseball as well as participating in wrestling. Basketball almost eluded him.

But Sean stepped onto the court and wore 32, the only number he ever wore. As a Cholla Charger, Elliott remains to this day the only Tucson high school player to make the McDonald’s All-American Team. As a senior in 1985, Sean averaged 31.3 points on his way to being named Tucson Citizen All-Star High School Basketball Team.

After graduation, Sean flourished at Arizona State University. In 1986, Elliott was named Pac-10 Freshman of the Year. He would join future Spur David Robinson on a successful campaign as part of the 1986 FIBA World Championship. Along with Robinson and his Arizona coach, Lute Olson, the USA brought home the gold. In both the 1988 and the 1989 seasons, Elliott was named Consensus first-team All-American and Pac-10 Player of the Year, and led the Wildcats to the Final Four as a junior.

Each season, Sean’s statistics for 3-point percentage, free throw percentage, assists, and points per game improved. His collegiate career crescendoed as he was recognized nationally by receiving the John R. Wooden Award, Adolph Rupp Trophy, NABC Player of the year, and the AP Player of the Year. But the best wasa yet to come as Elliott broke the record for the most points in Pac-10 history, a record up until then that had been held by Lew Alcindor, aka Kareem Abdul-Jabbar. He left Arizona as the all-time scorer, a title to which he still holds. And #32 was just getting started.

Six players wore #32 before Elliott. Reggie Johnson had it for less than 2 seasons between 1980-1982. Ed Nealy came off the bench as #32 for two seasons. Marc Iavaroni donned #32 as a Spur 57 times in between Johnson and Nealy. And the trio of Darrell Lockhart, Todd Mitchell, and John Stroeder would bear Elliott’s future emblem for a combined 5 games.

Sometimes a player and his number are a match made in heaven, and no Spurs fan would ever associate #32 with another player. Once Sean Elliott dressed in the silver & black, his road to immortality began.

Elliott joined the top pick in the 1987 draft, David Robinson. Together they began the long road to rebuilding the Spurs. In each of his first six seasons with the Spurs, Elliott’s scoring increased from 10 to 20 points per game.

Elliott’s playing style derived flowed from his length and speed. His wiry frame and 3-point accuracy led defenders to play him on the perimeter awaiting long jump shots. But Sean used his quickness to cut into the paint, often losing one defender and forcing another to either leave Robinson for him or, most often, standing pat in a lose/lose situation. As a result, highlight reels of Sean Elliott dunks are readily available. Unafraid to take the ball to the basket, Elliott would collide with defenders, rise up, and muscle his shot in. But his game was far more than just dunks — there were assists, a variety of jump shots, free throws, 3-pointers and an arsenal of lethal ball-handling that made him essential to the Spurs 90’s rise.

In 1993, with his points per game, assists, and steals at career highs, Elliott made his first NBA All-Star appearance with Robinson.

Unfortunately, at the end of the 1993 season, the Spurs traded Sean Elliott and David Wood to the Detroit Pistons for rebound sensation Dennis Rodman. The fit would prove a bust as Elliott’s scoring declined and wasn’t able to gel with with Piston leaders. He stayed just one season with Detroit before a trade with the Houston Rockets for Robert Horry was put into motion.

But the trade with the Rockets was never finalized. Elliott didn’t pass the physical and his kidney condition –focal glomerulosclerosis— was exposed. Although he had the condition which prevents the kidneys from properly filtering waste from the blood- the Pistons had agreed to the trade to dispose of Rodman. In the end, the Spurs traded back to Detroit for the fan favorite for Billy Curley and a second round pick that became Charles O’Bannon.

In his season away, Negele Knight was be the last player to wear Elliott’s #32. Ironically, as Sean made his way back to San Antonio, Knight moved to Detroit and again wore the #32 immediately after Elliott.

In the time between when the Elliott/Horry trade failed to materialize and when the Spurs regained #32, Sean briefly considered retirement, but eventually decided to suit up once again.

Along with Robinson’s MVP dominance and point guard Avery Johnson’s ability to dish out assists, a Spurs Big 3 was forming — long before the term would ever be coined for the trio of Duncan, Ginobili, and Parker. It was just a matter of time before the skill sets of the Spurs would mature.

While averaging 20 points per game in 1996, Sean was once again invited to the NBA All-Star game, which was taking place on his home court in the Alamodome. In one glorious season, Sean would execute his most memorable feat, win an NBA Championship, and undergo a kidney transplant.

The 1999 season did not begin well for the Spurs. A 6-8 run was giving players and fans doubts about the eventual outcome. Elliott had missed 46 games the previous season, but his game was slowly returning. With the addition of Tim Duncan to the Spurs starting line-up, Sean Elliott’s floor spacing ability became even more lethal. While hopes were rising, the Spurs went on a 31-5 run to complete the shortened lockout season and enter the playoffs the top seed in the NBA. Elliott eventually shot 40% from beyond the arc while scoring 11.9 PPG in the playoffs. But it wasn’t just Sean’s consistency that drove the team. Elliott holds what is often considered THE defining momentum booster of the 1999 Championship- The Memorial Day Miracle:

With 12 seconds left, the Spurs were down by two points without having ever held a lead in the game. Mario Elie passed the ball into Elliott who caught it on the out-of-bounds line and —in a fluid movement— turned, shot the ball over a towering Rasheed Wallace, and landed the Spurs their first lead of the evening, and a leg up in the series. The shift in momentum was enough to raise the Spurs to the level of champions. You can watch the amazing shot from multiple angles in this clip:

The Spurs ended the season with a championship, and shortly thereafter Sean Elliott underwent a kidney transplant, a gift from his brother Noel.

In a true show of heroics, Elliott returned to the Spurs months after the transplant to complete the 2000 season. He continued as a starter during the 2000-2001 season as the Spurs finished with the best record in the NBA. But at the end of the season, Elliott determined it was time to retire from basketball.

Though his time on the court had ended, Elliott maintained his place in the game as a Spurs TV Analyst. Along with his partner Bill Land, Spurs fans are treated night after night to announcers who truly love their jobs and are complete fans of their team. They are unapologetic Spurs announcers often using “we” when talking about the Spurs, and the fans love it. Year after year, their ratings rank among the highest in the NBA. Sean Elliott, always a fan favorite, transcended the court and has maintained an essential role with the Spurs.

Even Tim Duncan misses him:

On March 6, 2005, Sean Elliott was honored by the Spurs organization by having #32 retired and his jersey hung from the rafters of the AT&T Center. But fret not, Spurs nation, Sean remains a prominent member of the Spurs Family and has no plans for leaving his limelight any time soon.

NEXT UP: AVERY JOHNSON “THE LITTLE GENERAL”