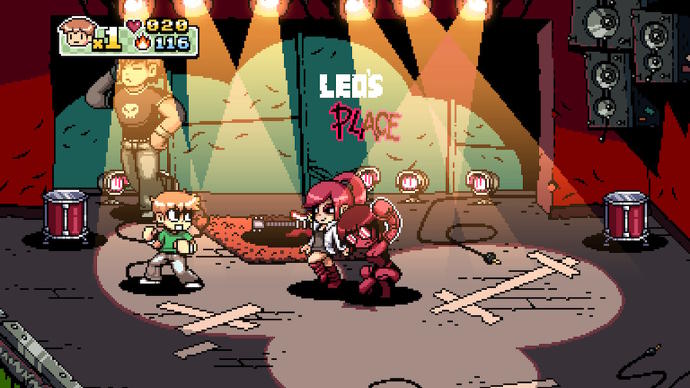 Scott Pilgrim was a dick and I loathed him, but then he became significantly less of a dick and I loved him. Throughout the course of Bryan Lee O’Malley’s 30-something issues, Scott stared down his past dickish actions and reckoned with the hurt he inflicted. What emerged was a better human being, and a graphic novel series that would rightly go down as one of the best in recent memory.

Scott Pilgrim vs. The World: The Game

But what happens when you strip away the growing pains of Scott Pilgrim as a character, removing all the strife and heartache he both doles out and shoulders throughout O’Malley’s saga? You’re left with a guy punching people and robots so hard they explode, I suppose.

That’s what Scott Pilgrim Vs. The World: The Game is, in short. It’s a collection of Scott’s toughest battles and biggest throwdowns, taken out of context and stitched together from the series on which it’s based. It’s cutting and pasting the page-churning showdowns against foes like Todd, Lucas Lee, Matthew Patel, and more into back-to-back gauntlets, throwing a horde of disposal minions in between each boss for good measure.

After launching over a decade ago in 2010, Ubisoft delisted Scott Pilgrim Vs. The World: The Game in late 2014, after the license for their adaptation expired. There’s naturally a state of curiosity around something that’s deleted from the digital aether (looking at you, P.T.), so it’s easy to see why so many Scott Pilgrim fans are looking to get their hands on the retro beat ’em up, nearly a whole seven years after it was vanquished.

I suppose the beat ’em up formula fits like a glove for Scott Pilgrim, who we’ve seen put through countless walls and ceilings, only for him to get back up and carry on swinging at formidable foes. So too is the beautiful 2D sprite-based art style from Ubisoft an excellent match for Scott’s adventure. Through the seven different “worlds” you’ll see countless characters and references that you’ll recognise from O’Malley’s graphic novels. “There’s Young Neil!” I would exclaim upon seeing my favourite layabout milling around, or I’d recoil in fear from catching sight of Julie Powers conversing with her lackeys. Battling your way through a curtain of flying fists in these seven worlds is a pleasure thanks chiefly to the lovely pixelated tributes in the background.

Scott Pilgrim’s video game counterpart isn’t a retelling of O’Malley’s story, but rather a curious “what if” situation for each playable character. It’s like interviewing each major character in Scott’s circle of friends, and asking them to recount their version of the events of the graphic novels. It makes perfect sense that Scott would casually disregard his brief fling with Knives Chau to focus on saving Ramona Flowers in his tale, just like it makes perfect sense that Nega-Scott would conquer the world/Toronto and Kim would fall for Knives in their respective endings to the game.

In this though, we lose a sense of struggle that’s so key to Scott Pilgrim’s graphic novels. It all comes down to one critical juncture in the comics: Scott Pilgrim is who he is at the conclusion of the series because he actively faces up to the pain he’s inflicted. There’s no running from the hurt that Scott has caused over the 30-plus issues (although he does try, on multiple occasions), and it’s abundantly clear to Scott that if he wants to win back the heart of Ramona Flowers and regain her trust, he needs to grow as a person. This isn’t exclusive to Scott, either: Ramona also needs to shoulder the burden of her past misdeeds and accept who she is before she can move forward in a genuinely loving relationship with Scott.

In choosing to remove these growing pains and errors from several playable characters, Scott Pilgrim’s game adaptation becomes more of an alternate history-style take on Bryan Lee O’Malley’s tale. For all I know, the Scott Pilgrim I’m playing as in the game could very well be the asshole that we meet at the beginning of the six graphic novels, as opposed to the changed person who emerges at the end. And damn, I hate that guy.

That’s not to say it isn’t an enjoyable trailblazing path of carnage through Toronto, though. Roundhouse-kicking and minion-throwing your way through the streets of Canada as Scott, Ramona, Stephen Stills, Kim Pine, or any of the other playable protagonists feels suitably satisfying, no matter the context in which I’m doing it. The boss fights against foes like Todd, with the vegan police swooping in to zap him with finger guns throughout the battle, are indisputably the highlights of Scott Pilgrim Vs. The World: The Game, as you’d expect from a brawler like this. There might be some critical context missing for Scott and company’s adventure, but it’s a treat nonetheless.